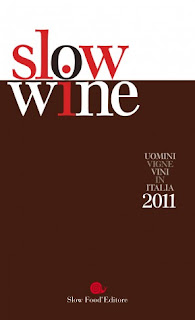 Until recently, Italian wines were something of a closed book to me - I knew the theory and the names of the various grapes and regions, but somehow had not quite "got" why the wines are so great.

My "road-to-Damascus" moment occurred at a tasting of Italian wines with GianPaolo Paglia, a winemaker from Poggio Argentiera in Tuscany, presenting to the Cambridge Food and Wine Society (see here). As GianPaolo explained that for an Italian, the wine is just another part of the meal and plays a supporting role to the food, suddenly, it all made sense - the characteristic intense, rasping, linear acidity of Italian wine is there to cut through the food that it is to be matched with. These are not wines with lots of easy-going fruit aromas for simple quaffing - it's about structure, rather than flavour.

At the recent Slow Wine event in London to promote the launch of the Slow Wine iApp (reviewed here), I got a chance to try a range of artisan wines from all over the country; in general, most of the wines were traditionally food-friendly in style but with a balanced freshness - a good mix of the traditional and the modern. All were well-made and proved to be at least very good, if not excellent.

Although Slow Wine's criteria for accreditation focus on inputs (vineyard practices, production techniques and winemaker values) as much as simply on outputs (the quality of the resulting wines), this just seems to prove that if you get things right up-front, good results will follow.

I started with two single-vineyard Soaves from Leonildo Pieropan; from 2008, they had a little bottle age and were particularly good examples - with lemony elderflower on the nose and palate, they were fresh, mouthfilling and minerally.

Bucci Classico, a Verdicchio from Bucci, was rich, leesy with some lemony savouriness on the palate; very food friendly, it would match perfectly with wild mushroom pasta in a creamy sauce.

The Riserva, a step-up which had some toasty hazelnuts on the nose and hints of elderflower on the finish, was blended from a mixture of old vines for richness and younger vines for freshness.

Senor Ampelio Bucci then poured me a sample from a bottle that had been open for several hours and the improvement with some air was striking - it felt noticeably more opened up and had a much longer finish.

He then showed me how he gauges the development of his wines with age - after rolling a tiny amount of wine around the inside of the glass, he leaves it for several hours, coming back periodically to check the development of the aromas.

The 2006 Barolo Ravera from Elvio Cogno was smooth and elegant with lots of cherry fruit, some tobacco, spice and vanilla; well-structured with impressive length and pleasantly approachable.

Altura's wines from the rocky island of Giglio off the Tuscan coast are grown on terraces on stony soils with an all-natural process with no artificial fertilisers in the vineyard and low sulphuring in the winery.

Their single-variety Ansonica was rich, savoury and full, with a real depth of flavour; by contrast, their red wine, Rosso Saverio, features up to 15 grape varieties yet had a homogeneous feel with aromas of cherries, spice and white pepper and a good structure.

Baricci make two wines - a Rosso Di Montalcino and a Brunello; being a relatively small winery, they use the same quality of grapes for both wines and the differences are merely in production. The basic Rosso from 2006 was impressive with a rich cherry and vanilla nose, some forest fruits and hints of spice; on the palate, there is a good tannic structure and balanced acidity.

The Brunello, aged in Slovenian oak for 36 months, felt like a real step-up with greater richness and intensity.

After a few enthusiastic tweets from wine blogger Robert McIntosh, the Rosso was snapped up on the same day for UK distribution by Naked Wines and is now available for sale on their site (here).

There were also two wines from Il Paradiso di Manfredi, Brunellos from 2003 and 2004; both wines had a Pinot-like funkiness of forest floor and mushrooms on the nose with cherries and hints of tomatoes on the palate with balanced freshness and a good tannic grip on the finish. I preferred the darker 2004 which felt more intense and firmer, whilst the 2003 felt more integrated and harmonious.

The most interesting of the whites for me was a Pecorino from Cataldi Madonna - grown at an altitude of 400m, it was fresh and crisp with elderflower aromas, a great structure and a minerally finish.

Distinctly modern in style and technically very well-made, it combined an up-front New-World appeal with cool-climate restraint and sophistication.

The red, Toni, was equally modern, with lots of fresh acidity, cherry fruit and pepperiness, but still a serious wine.

A 2005 Montepulciano d'Abbruzzo from Praesidium was ripe and mouthfilling yet also restrained with a rich nose of oaky vanilla, lots of bramble and cherry fruit on the palate and a long grippy finish.

A Ragis Rosso from Le Vigne di Raito on the Amalfi coast made mainly from Aglianico had a complex nose of cherry fruit and shrubs with aromas of liquorice and cocoa on the palate.

The Primitivo di Manduria from Attanasio was a heady, sensual delight - made from Primitivo grapes grown in vineyards warmed by the mistral, it had a rich nose of ripe, jammy fruit, leather and eucalyptus with sweet spices, balsamic and vanilla on the palate and a smooth, jam-and-custard texture; despite all this exuberance (and 16.5% alcohol), it had balanced acidity and a dry finish.

The sweet version of this wine, made by drying out the grapes after picking, had all the good qualities of the dry wine, but was even riper and more baked and more hedonistic with an intense sweetness.

Capichera is located on the north of this Mediterranean island, not far from the coast where the sea breezes keep the vineyards naturally free from pests.

Their Vermentino was fresh and modern with floral notes on the nose, lots of fruit on the palate and good minerality.

The Assaje carignano was also perfumed on the nose, with cherries and dark berry fruit and hints of eucalyptus and a rounded mouthfilling palate and long finish.

A dessert wine from Tondini, Lajcheddu, which I had spotted earlier on, was perhaps the perfect way to end the tasting - baked, toasty, rich, marmaledey and intense, it had a balancing and fresh linear acidity.

There were two food stands at the event - an intensely flavoured Grana Padano cheese and some Italian-style salamis from Peelham Farm in Scotland.

The organic salami was rich and intense with a dense, smooth texture, some sweetness and a lingering after-taste; the chorizo added to this a thwhack of paprika and spices, whilst the Italian added a strong flavour of fennel seeds.

These were some of the best salamis I can remember having recently, very much following the Italian approach of combining strong, simple flavours using really high quality ingredients.