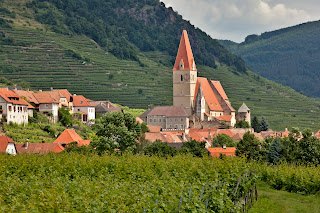 When I used to visit Vienna regularly on business, Prager were some of my favourite wines to have in one of the city's new wave of modern international restaurants.

The winery, run by Toni and Ilse Bodenstein, is based in the pretty village of Weissenkirchen, mid-way up the Wachau between the eastern end (warmed by southerly air currents from the Pannonian plain) and the cooler western end, but still manages to produce mainly Smaragd wines - the highest level of ripeness. It is also one of the great names in the Wachau.

I tried three Prager wines at the recent Annual Tasting of Austrian Wines in London; the most interesting comparison was of two Grüner Veltliners - both Smaragd, both from the same south-facing Achtleiten vineyard and year, 2009, but one from relatively youthful 50 year-old vines whilst the other was from 80 year-old vines.

Prager's wines at any level are pure, precise minerally and intense with concentration and focus - the younger of the two was ripe, grapefruity and mineral, but the older "stockkultur" vines had produced a richer, riper and more intense wine.

The word "Stockkultur" refers to the way the vines are trained, a single vine with four shoots which increases the density of planting.

The final wine, a Riesling Steinriegel, was also ripe, minerally and intense.

Austria does not really do any "bargain-basement" wines - limited vineyard area and the relatively high costs of production make it impractical from the wines to be produced in mass-market quantities.

However, at the top end, the wines are world class, but not yet priced accordingly; this is the area where Prager operates - with only a few entry-level wines priced below about €20 - so although the wines are not in the everyday price bracket, they do represent something of a bargain. 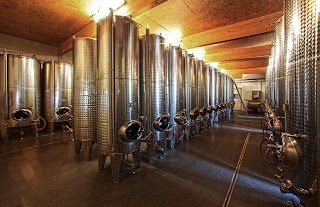 They wines were presented by Field, Morris & Verdin.