Blind Tasting - Why I Am Rubbish At It 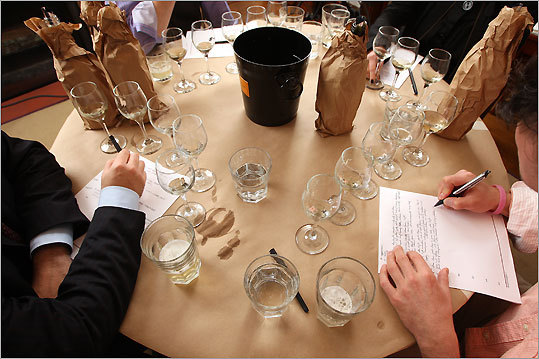 I recently went to a blind tasting and, like most people there, performed fairly badly.

We tried a number of IWC-medal-winning wines and were then invited to hazard guesses at grape variety, country, age, alcohol content and price.

With a winning score on the night of below 50%, this was no easy test, but I started to wonder why I had failed so miserably and what I was missing.

It occurred to me that wine reviewing and blind tasting use exactly opposite skills, albeit they are based on a common starting point.

First the commonalities; both activities involve tasting and assessing wine - that's about it ! Once that has been done, the blind taster and the reviewer go in completely different directions.

The blind taster's challenge is to guess certain specific facts about the wine without the benefit of any additional information - grape variety, origin etc.

By contrast the reviewer generally uses all the information available to make an informed assessment of the wine's quality - for me, for example, the thought processes are along the lines of: is it well made ? Do I like it ? Is it balanced, complex and interesting with good length ?

To an extent when reviewing, I will also think about whether the wine is expressive of its grape variety and terroir, but even if it is not and it is still enjoyable, that doesn't really matter.

So, the blind taster aims for factual accuracy, the reviewer makes a qualitative assessment. It's a bit like the difference between Arts and Sciences at school - and I'm a linguist by education.

It also occurs to me that to guess a wine by blind tasting also requires having tasted that wine (or at least that style previously). To spot an Aussie Semillon, for example, it is helpful to have at least tried one before.

However, my approach has historically been to buy local - either something from the region when travelling on business to Europe or visiting the producers on a driving holiday. So I haven't had too much Aussie Semillon recently.

There is a third category which is something of a hybrid of the two - the IWC (or other competition) judge. This combines both aspects in that the wines are tasted semi-blind (there is an indication of the category for which they have been entered, e.g. NZ Sauvignon under a tenner), and the aim is to select the wine that is the best example of that style, so the judges are looking for both typicity (does it have the qualities of a NZ Sauvignon ?) and quality (is it a good wine ?).

Whilst wine competitions had something of a bad press a while ago, I find myself increasingly respecting the work of the judges and appreciating what a difficult task it must be: drinking a bottle of wine over the course of an evening and deciding whether you like it is one thing; sampling tens, almost hundreds of wines on the same day and assessing their relative merits must be quite another.

At a recent wine event, I tried an unusual Chilean Riesling-Chardonnay blend (reviewed in more detail here); the wine was well-made with good expressions of both grape varieties, but for me, it was such an unusual combination, I was unable to decide whether I actually liked it or not.

And there's the rub, I believe - when tasting wines, professionals will most likely look to pigeon-hole the liquid in front of them into some familiar category. As a result, they are probably more inclined to choose something typical, if not stereotypical, for an award or commendation; anything too different, too quirky risks being eliminated as not fitting the brief, as by definition, a broad group of people will never agree on a standard definition or appropriate level of quirkiness.

As a result, your medal-winning kiwi Sauvignon will probably taste exactly like a typical kiwi Sauvignon should - which is fine, if absolute typicity is what you want.

However, personally, I rather like a bit of quirkiness in my wines, something a little unexpected and not-too-textbook; these sorts of wines don't always win medals, but for me, like a rather eccentric friend, they are fun to have around.

As to getting better at blind tasting, I asked the question to a some wine professionals, including a number of MWs, and got some excellent advice, as well as reassurance that even professionals do not get it right all the time.

A constant theme from almost all was practise (sounds fun !), memorise (not too difficult), take lots of notes (hmmm, some discipline needed, but obviously having a blog helps), get to know the various different smells and aromas (I remember once rubbing a blackcurrant leaf and thinking - Sauvignon Blanc !), try the classics (undecided on this one - I still like some quirkiness) and taste methodically (e.g. compare within regions).

As far as the latter goes, I have found that wine fairs are a great place to learn both the similarities and subtle differences within regions such as Bordeaux or German Rieslings. Certainly that was the case at the London Fine Wine Fair and Taste of Christmas events I attended recently. However, general tastings, I have found, tend not to be focused enough to assist with this, as the presenter often wants to show a range of styles.

Replicating the wine fair set-up at home may not always be possible, but one suggestion particularly appealed: set a theme for the night, get a bunch of friends to bring around wines in paper bags so they can be poured but not seen and try to guess their identities.