In the Spanish Fine Wine section of the Fine Wine Fair earlier this year, I tried something a little unusual - a 60 year-old Spanish Luis Felipe brandy from from Bodegas Rubio, a producer of brandies and vinegars. 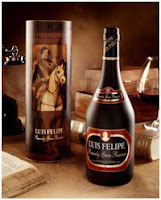 Made shortly after the end of the Second World War when Britain still had rationing, Klaus Fuchs confessed to being a spy and the Korean War started, it is a generation older than me and is almost certainly the oldest thing I have ever consumed.
It is matured for all 60 years in oak casks in a solera system, thus keeping the Spanish angels very happy.
Dark in colour, it is, of course, not cheap, but aromatic, ever-so-smooth and deliciously fruity with more than a hint of the sweet Pedro Ximénez from maturation in ex-PX sherry casks.


The tasting provided was little more than a few drops on the bottom of a small plastic beaker, but I managed to eke it out to a couple of small sips that seemed spread across the tongue slowly bringing a broad grin of satisfaction.
Clearly something for a very special occasion, it has been served at Spanish royal weddings.
£125.00 / £99.00 (show price).
Links
Fine Wine Fair - http://www.finewinefair.org/
Bodegas Rubio - http://www.bodegasrubio.com/en/