Many years ago, I lived in Vienna and even after moving back to the UK, continued to travel there on business.

Our office was located in a mainly residential part of the city and there were not too many good restaurants in the area; however, there was one and it seemed to do very good business out of us as, frequently, there would be groups of colleagues huddled in four or five different corners of the restaurant.

Austrian food does not quite have the same cachet as, say, French or Italian. Typically, it is a mixture of the cuisines of the various neighbouring states which formerly made up the Austrian empire, all of them hearty to say the least - Hungarian goulash, Czech dumplings and lots of meat.

However, as I am finding with traditional British food these days, there is always someone who is prepared to take historically unfashionable foods and develop their potential with a light hand and a touch of refinement.

And so it is at Plachutta - their approach is not flashy, fancy molecular gastronomy and you will get no plates of foamed vegetables here. What you will find is well-made, refined but flavoursome and satisfying examples of Austrian classics, such as goulash with spaetzli, local freshwater fish or, my personal favourite, Tafelspitz. 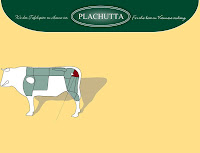 Tafelspitz translates as boiled beef, but that name does do adequately do justice to the wonderful dish that is served at Plachutta. It is available in numerous varieties depending on the cut of meat, and you start with a diagram of a cow on the menu to indicate where each cut comes from.

For Plachutta, quality of ingredients is everything and they follow a strict set of principles:

1. We know our farmers.
2. All our cattle were born exclusively in Austria.
3. We only consider cattle that are raised in a natural way.
4. We are 100% aware of what ends up in the feeding trough.
5. We are able to track all the information regarding every single cow back to its birth.

Tafelspitz is a dish that suits the cheaper cuts, especially ones streaked with a bit of fat as the meat is gently simmered for several hours in a clear stock until it is completely tender, with some root vegetables added for more flavour.

Now comes the fun part; brought to the table in a pan, the stock and vegetables are served as a soup for the first course, with the meat forming the main course along with side dishes of salty matchstick chips, sour cream and chives, apple sauce with grated fresh horseradish and spinach and cream.

﻿
Finding a wine to stand up to this complex mix of flavours would often be quite a challenge; however, Austrian wines are perfectly suited to the task and Plachutta's wine list is excellent, featuring many that became regular favourites - crisp but full-bodied Rieslings from Prager in the Wachau or Bründlmayer in Kamptal, steely, minerally Sauvignon from Tement and Polz in Styria and a superb Burgundy-style Chardonnay from Velich in Burgenland.

Plachutta has a number of branches in Vienna, with its flagship in the first district (Vienna's mainly pedestrianised and beautiful city centre). The Plachutta in the 19th district, a smart residential suburb near the Vienna Woods and the Heurige district of Grinzing, also provides basic but comfortable accommodation.

There are also branches in the 13th district of Hietzing as well as Mario (also in the 13th) and Grünspan in the 16th district  of Ottakring.

The restaurants are a family business and have been run by Eva, Mario and multi-awarded chef Ewald Plachutta since 1987.