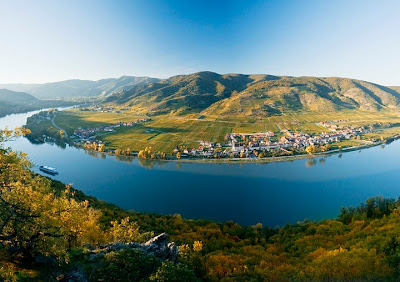 A few years ago when I lived in Vienna, we would regularly get in the car, pop across the Danube and make the short run up the autobahn up to the Wachau Valley - a meandering stretch of the Danube with fruit trees, picturesque villages, a ruined castle that became home to Richard the Lionheart and Austria's prettiest church spire.

As often as not, we would park in the pretty village of Dürnstein and go for a walk through the vineyards to enjoy the view up the river.

A little later, I would learn to associate Dürnstein with something else - it is the home of Domäne Wachau, possibly Austria's best co-op wine producer.

At the time, I was a big fan of Riesling and tended to think of Grüner Veltliner as simply a poor man's version

However, I have recently had cause to reconsider this opinion, having had an award-winning GV at an IWC tasting and now this GV from Domäne Wachau.

A few years ago, when Austria's wines first started to acquire an international reputation for themselves and the backlash against oaky Chardonnay began, it was suggested that Austrian GV could be the next big thing.

In the end, it seems to have been Pinot Grigio that has become the big favourite and after a brief surge of expectation, GV is once again not that easy to find in the UK.

Partly this is because, since the glycol scandal of the 1980s, Austria has gone down a path of making fully dry, technically well-made wines, opting for quality rather than volume.

This means that, at the bottom end, the territory of pub Pinot Grigio costing under a tenner (including sizeable mark-up - maybe greater even than the original selling price), Austria does not even try to compete, but in the mid and top-ranges, the country still represents amazing value for money - and will continue do so for as long as its wines do not command fully the reputation they deserve.

This Grüner Veltliner Terrassen from Domäne Wachau is named after the steep terraces overlooking the Danube where the vines are cultivated.

The Federspiel tag is a falconry term and means it is on the second of three levels of alcoholic strength - the top being Smaragd, meaning emerald and referring to the colour of a local lizard.

When I last presented a pair of GVs for a tasting, there were comments from the audience that the flavour was quite green - all celery and lentils.

This medium-bodied GV has a lightness and a hint of smokiness with aromatic white pepper on the nose; on the palate there is the refreshing acidity of ripe cox's apples and conference pears.

Elegant with good structure and mineral backbone, it also has a slightly herbaceous character that, along with the smokiness, is strangely reminiscent of a Loire Sauvignon.

We had it with a very fishy dinner of smoked salmon mousse with rocket followed by coquailles St Jacques and lightly-baked salmon.

In truth, it was slightly overwhelmed by the meatiness of the fish and the strong flavours of the salad leaves - a Smaragd would have been better here - and a more appropriate match might perhaps have been a simple white fish, such as plaice or sole.

Alternatively, match with light Italian food, such as mozzarella or tortelloni tossed in butter with grated Parmigiano and a grind or two of black pepper on top.

The 2009 vintage has a number of awards:
Domäne Wachau Grüner Veltliner Terrassen Federspiel 2010 - provided for review.

€7.60 from the DW website - http://shop.domaenewachau.at/product_info.php/info/p881_Gruener-Veltliner-Federspiel-Terrassen-2010.html
Also available from Waitrose for £7.59.