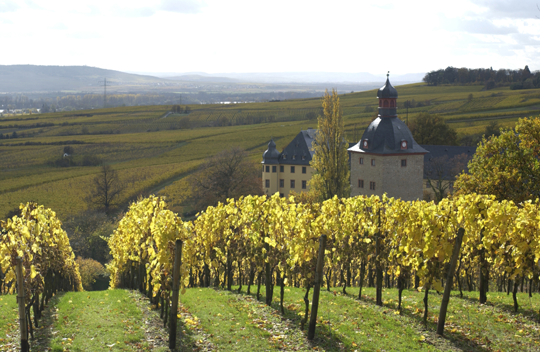 A while ago, I went wine-buying in the Mosel Valley and was very impressed with a clutch of wines I bought there, so I was keen to visit the Wines of Germany stand at the recent Fine Wine Fair in Chelsea in London.

Generally, for Germanic whites I tend to look either to Austria (for historic reasons - I used to live there) or Alsace, so whilst the grape varieties of Germany are familiar to me, I am less aware of the nuances and regional variations.

Riesling is the white grape most associated with Germany - it originated in the Rhine region and is considered highly "terroir-expressive", that is highly influenced by and expressive of where it is grown.

To me, Riesling is the great white grape variety - when made well (and dry) it is crisp, thrilling, slatey and minerally with honeyed undertones it is refreshingly complex, mouthfilling and extremely food friendly.

I first fell in love with Riesling from Austria, with its warm climate and fashion for fully-dry wines; I am less familiar with German Rieslings so I was keen to find out more.

The first wine was a spaetlese trocken from Sybille Kuntz. The basis of German wine law is a system of classifying not places (such as Bordeaux) or grape varieties (such as Shiraz), but grape ripeness - i.e. sugar content and potential alcohol level. In the case of this wine, spaetlese means the grapes are (literally) late-harvest, but trocken indicates that the wine is fully dry; like all the wines here, it was a textbook Riesling, with grapefruit and apple on the nose and a tight, limey finish.

The next wine was a von Buhl Riesling from the Pfalz, further south and sunnier than the Mosel. It was noticeably fuller and fleshier than the previous more northerly version.

Next up was another Mosel Riesling from Dr Loosen; with a clean, flinty zippiness, this was similar in style to the first.

The following wine was from the Rheingau, east of the Mosel, and was again riper and fleshier than the two Mosels.

The last two Rieslings were both from the Mosel again felt leaner. The first of these was a zesty and herbaceous Fritz Haag was harvested at spaetlese levels, but fermented to dryness whilst the final one was a light (just 8.5%) and crisp wine from Max Ferd. Richter.

One of the great things about a wine fair is the opportunity to dive into a relatively specialist area and come out with a much greater understanding of its nuances, to spend half-an-hour or so being guided through a range of wines on an one-to-one basis.

What I really noticed with these wines is how bracing and minerally the Mosel Rieslings are with an unmistakable crisp, racy nose whilst those from the Pfalz further south are slightly fuller, fleshier and more rounded.

As with the Bordeaux section, it was really informative to focus quite narrowly (a single grape here, a single region there) and explore the nuances in more detail.

All the wines at the German stand were delicious and, with only one partial exception, fully dry yet balanced on the finished and not too bracing.

Ironically, given that German wine law does not recognise the concept of terroir or even regionality, I came away with a much deeper understanding of the differences between regions.