Some Sherry Talking on Cambridge105 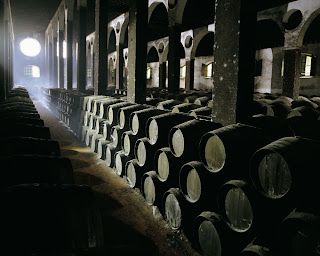 Whilst researching potential topics for the Flavour programme on Cambridge105, Aoife Maxwell who blogs as Gastronomic Girls asked me to talk about Sherry.

I recorded it in two parts with Flavour's presenter Alan Alder; here is an edited transcript of part 1 looking at pale sherries and the dry darker styles - it also available here as a podcast.

It does seem as though Sherry is finally becoming more popular again  - the so-called "Sherry revival" that was much talked about a few years ago, along with aunts and vicars, is one of those things that needs to be mentioned in any discussion about Sherry.

There was a list of the top 10 Sherry Bars in London recently in The Drinks Business; a few years ago, there wasn't even such a thing as a Sherry bar, so to have a Top 10 listing now is a sign of how popular Sherry is becoming.

There are probably a number of reasons why Sherry is starting to regain popularity:

- in part, I think Sherry's reputation had got so low in this country that the only way was up.
- secondly I think there has been a focus on quality and style - away from the sweetened, blended dark styles that we think of historically.
- finally, I think Sherry has benefitted from the general gastronomic innovation that we now see in Spain. It's now closed down of course, but El Bulli was for several years reckoned to be the best restaurant in the world - Spain is trendy.

I think the key things to understand about Sherry are how it's made and what styles there are. If we start with how it's made, the key elements are:

- the grape variety, which for the vast majority of Sherries is Palomino
- next the soil type, which is a spongy white chalk known as Albariza: this is important because the chalk gives a finesse to the Sherry
- then we have Solera system which is used for ageing and blending: Sherry is aged in barrels and a little (no more than a third) is bottled each year. The barrel is then topped up with wine from a slightly younger barrel, which is itself topped up from the next oldest barrel and so on back down the line. This means that in theory, there is at least a little of every year's wine in the barrel from the initial fill onwards - which is at least several years and can be decades or even longer.

So all Sherry is a blend and is non vintage then - in that respect, it has many similarities with Champagne: it's an elegant, non-vintage wine grown on chalky soils whose character comes largely from its production method.

The final key thing about Sherry is flor - a yeast that grows on top of the sherry in the barrel. It feeds on the new wine that is added and imparts a pungent, yeasty character to the wine. 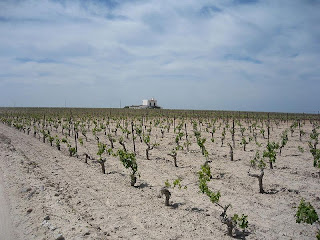 The first thing you notice about Sherry is that it doesn't have a lot of fruit - the aromas are what we called evolved or tertiary; things like pungent yeastiness for the paler styles and roasted almonds for the darker ones.

If that does not sound entirely appealing to someone who has not yet tried Sherry, the key to remember is it's all about the finesse and acidity - I think it's important to make the point that sherry is very much a food wine.

The basic style of Sherry will be pale - either fino or manzanilla.

A fino is fortified up to 15% alcohol and then aged in solera with the growth of flor, whilst a manzanilla is made in the same way as a fino, but comes from the region of San Lucar de Barrameda where it is a little cooler and so the flor grows thicker, giving a more pronounced yeasty, tangy sort of flavour. 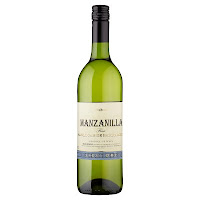 My go-to fino has to be Tio Pepe which is very good - two others to try are Hidalgo La Gitana from Cambridge Wine Merchants and Waitrose's Manzanilla Fino which is positively bursting with a seaside salty tang.

Lyndsey Spellman at Cambridge Wine Merchants suggests that the rule of drinking perfectly chilled fino is 'one at eleven or eleven at one'.

Both fino and manzanilla should be pale, elegant and refreshing. They work well as an aperitif - especially on a hot day. Or they match with tapas style food, like Jamon Iberico, Manchego, olives and bread with oil.

It's good and very easy to do at home too - a few slices of meat and cheese from the deli, some bread and a bottle of sherry popped in the fridge for an hour or so to chill.

Having mastered the paler Sherries, we can move on to the darker ones which are more complex beasts.

Amontillado is a fino where the flor has been allowed to die away, so it starts to age oxidatively. It gets darker and picks up aromas of roasted walnuts, maybe some antique leather.

An oloroso is fortified up to around 20% alcohol immediately so that no flor grows - again, it ages oxidatively so becomes darker and acquires those roasted flavour characteristics.

The final one to mention is Palo Cortado which by rights should not exist - it is Sherry that is destined to be a fino but where no flor grows and so ages oxidatively - it is either a freak occurrence or something special depending on how you view these things.

So to summarise, Amontillado was a fino, Oloroso was never a fino and Palo Cortado should have been a fino.

As to food matching, these are all dark, so need foods to match. I find a beurre noisette matches well - it's basically melted butter gently browned in a pan with a drop of lemon juice added at the end. Sea bass and beurre noisette is a particularly good match. The roasted character also works well with roast beef and Yorkshire pudding.

The darker sherries I'd serve at something like pantry temperature - just a little cooler than room temperature. 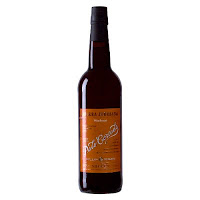 I’ve got two Palo Cortados to recommend: Waitrose's Solera Jerez Palo Cortado is very good indeed. It's made by Lustau and had a touch of sweetness on the finish. Also, there’s Gonzalez Byass Leonor Palo Cortado from Cambridge Wine Merchants
Prices

I wanted to show how good value Sherry can be, so I've picked examples that are generally under a tenner. You will see greater complexity if you move up the price level, but these are all very good wines at this price.

I think it is fair to say that it's worth trying Sherry now whilst it's still gaining - or re-gaining - popularity; right now is a bit of a golden age for Sherry drinkers - quality is good and prices are low. You can get bottles of 30 year old sherries, properly aged, for around £20: you can't do that with other wines.

Email ThisBlogThis!Share to TwitterShare to FacebookShare to Pinterest
Labels: sherry