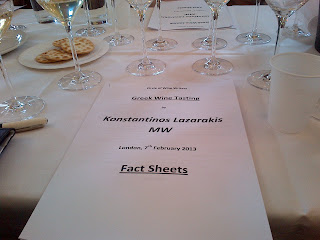 "The Balkans (Turkish for "mountains") run from the Danube to the Dardanelles. It is, or was, a gay peninsula filled with sprightly people who ate peppered foods, drank strong liquors, wore flamboyant clothes, loved and murdered easily and had a splendid talent for starting wars. I, as a footloose youngster in my twenties, adored them"
- C.L. Sulzberger, A Long Row of Candles 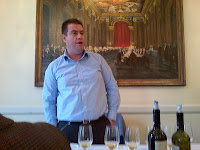 It is only appropriate that unusual, distinctive and characterful wines should be introduced by a charismatic personality - Konstantinos Lazarakis, an entertaining ex-jazz guitarist and Greece's first Master of Wine, is just that.

Despite giving the world the word οἶνος (oinos) several millennia ago, Greece is these days far from being a classic wine region - a mountainous Balkan country better known for its financial irregularities, scandals and popular unrest, it reminds me in many ways of Austria which had to reinvent its wine industry in the 1980s.

Just as Austria at the other end of the Balkans is home to unreconstructed pan-German paranoia, Greece exists in a permanent state of unresolved conflict, a land with ancient roots and too much history where unresolved passions still run strong; western mistress, eastern bride.

You say "Greece" and I first think of poetry, democracy and Socrates. Next come the rocky landscapes and package holidays. Then I think of Byzantinism and Grexit.

It is not an easy region to characterise or summarise, but for those looking for some readable insights into the country, Robert Kaplan's Balkan Ghosts is as good a place to start as any.

Whilst there are numerous wine-growing regions and terroirs, producing reds, whites and stickies from indigenous grapes (that can be hard for a northern European tongue to get round), Greece's total output of wine is around just three quarters Bordeaux's.

Unlike Bordeaux, however, Greece still has a number of Phylloxera-free vineyards in rocky or sandy places where this root-eating pest cannot survive.

All the wines were hand-chosen by Konstantinos and presented to the Circle of Wine Writers to give a sense of the diversity of Greek wines - as a result, only some are commercially available in the UK. 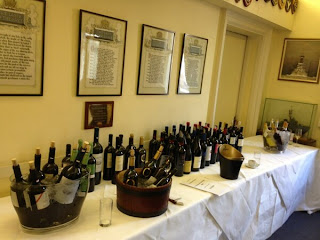 The Whites
The whites were mainly Assyrtiko whose spiritual home is the island of Santorini and which Konstantinos described as being a red wine coloured white, meaning that it is all about texture - in particular, minerality and persistence on the finish.

There is no uniformity of style or technique to Greek wine-making - some of these were modern and international, others distinctly old-school.

The one constant was the high levels of acidity, meaning the wines were always fresh, precise and well-structured.

The Sigalas Santorini VQPRD is grown by trailing the vines around baskets - the winds whips off the outer leaves and berries leaving just tiny yields inside the basket.

After 20-30 years the basket can no longer support the weight of the vines and needs to be cut back down. However, the rootstocks - which are what give the character to the wine - remain and can be up to three centuries old.

The Ktima Pavlidis Assyrtiko was from the northern and superbly-named region of Drama near the Bulgarian border - there was no wine-making here at all until 1988 when a couple of wealthy businessmen decided to give it a go, initially with red Bordeaux varieties but now with local varieties.

The Reds
The red wines were mainly Xinomavro and Agiorgitiko, whose names mean sour and St George respectively.

If Agiorgitiko is a summery crowd-pleaser, then Xinomavro is a surly bitch of a grape. With low primary fruit, it is - according to Konstantinos - a slap in the face for modern international styles - aromas are limited to sweet red chili in the younger wines moving through bell peppers, tomatoes, aged leather, vegetal undergrowth and rosehips with age; the interest, then, lies in its linear acidity and extremely fine, red-tea tannins.

The youngest of the reds, a Paros Red Reserve (made from mostly Mandilaria), was from 2007 from the island of Paros, where 25% white wine may be added to the reds - in this case as Monemvassia grape-must part-way through fermentation to act as a natural form of chaptalisation.

The oldest, from 1993, was I thought the most interesting of the reds - distinctly old-school in style, it showed rosehip and bell pepper on the nose that evoked an aged Medoc, and had a lovely acidity and savouriness. Konstantinos noted that given more time to open up, the fruit would emerge on this wine.

A more modern style of Xinomavro was from Alpha Estates in northern Greece and, being grown on sandy, Phylloxera-free soils, is ungrafted.

After the challenging hill climb of the Xinomavro, the ripe, easy nature of the Agiorgitiko seemed like a gentle stroll - lots of fruit, lower acidity and a ripe sweetness are the hallmarks of this grape.

The most unusual of the reds was Labyrinth made in a sherry-style solera system by Domaine Skouras where Konstantinos is a consultant; the wine was a blend of every vintage from 1999 - 2006 and had a curious blend of both youth and aged character.

The Tsantali Metoxi, a blend of Cabernet Sauvignon and Limnio (a variety mentioned by Homer) was described as being something especially for the ladies - it is grown on Mount Athos by monks who do not allow the presence of any women.

Jancis Robinson is said to have tried this wine but refused to publish a review it due to the sexist slight - by contrast, Russian leader Vladimir Putin is apparently a big fan; presumably it appeals to his orthodox / machismo / male-dominated view of the world.

The life of the monks, it seems, is however, not all dull - they get an allocation of 1/2l of wine with lunch and 1/2l a wine with dinner. Double if they are ill. 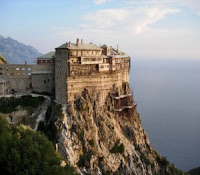 This prompted a comment from Brett Jones and Quentin Sadler that they had visited the monastery and found that the monks were all "ill".

The monks also, apparently, despite their vegetarian diet eat fish regularly - they like it so much so they "reclassified" it as a vegetable.

The final comment on the celibate monastic lifestyle was that the monks do not miss the presence of women - except when the time comes to do the washing up.

Picaresque and old-school like the wines, these stories and witticisms remind us of a different way of looking at the world where nothing is taken quite so seriously and which allows life's great events and tragedies to unfold as a backdrop to daily life. 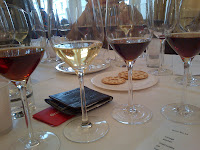 The Stickies
This was, for me, the highlight of the tasting, with some luscious stickies of various hues.

The Late Harvest Sitia VLQPRD is made by a technique dating back to the middle ages - the wine is stored in barrels in the sun and over the summer alcohol evaporates at a faster rate than water. This reduces the alcohol content to the point at which fermentation can start again in the autumn when cooler weather arrives.

The grapes for this wine were harvested in 2000 but fermentation lasted for six years before final bottling; it is not a commercial venture and the wine is not available to buy.

The Belvedere Natural Sweet Wine was much more modern in style - a pale golden in the glass, it was floral and blossomy with a peachy texture. 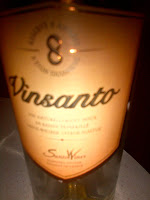 The last two dessert wines were rather special and intensely sweet: the Samos Nectar was from 1980 and aged in oak barrels for 28 years; the Vinsanto 8Y was a blend of 2003 and 2004 wines, aged for eight years in old oak, with fresh acidity and lots of savouriness.

For his summing up, Konstantinos characterised Greek wines as:

He also added that these wines need support - the winemakers could make more money on a lousy weekend in May if they pulled up their ancient, ungrafted vines and built a villa to rent out to package tourists.

I choose to put it another way: to me, Greece is a place of structured landscapes rather than gentle rolling countryside - a land of ancient travellers, gods and and heroes, set against an epic backdrop.

There is no noble Burgundian pastoralism here, but rather the uncompromising intensity of the midday Mediterranean sun on hard rock.

Lying on a geopolitical faultline, Greece is the natural frontier between the rationality of post-Renaissance Europe and the tyranny and inhumanity of ancient middle eastern empires.

This is the history, passion and intensity that you can taste in these wines - and may it never change.