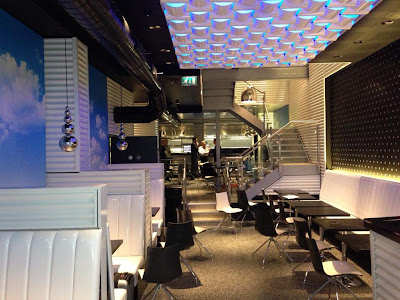 Looking back, a significant legacy from the influx of London commuters into Cambridge (myself included) must be the improvement in the dining scene beyond the usual tourist fare.

Additions and reinventions over the years have ranged from the quirky (The Punter) to the upmarket (Hotel du Vin) and the edgy (Fitzbillies).

The ripple effect of these central venues has been a series of smaller, more boho independent places, often along Regent St and Mill Road.

CAU is the latest addition and doesn't quite fit into either camp - being neither overtly upmarket nor quite independent.

It is, or at least claims to be, an Argentine steak restaurant - in reality, it is the second offering in a chain from the Gaucho group.

From the start, it's clear that this is an outfit that knows what it's doing - the simple yet eye-catching logo and matching interior style with touches of a 1950s American Diner is clean and classic but also well thought-out: sitting in a booth for four we are able to hear ourselves speak at normal volume and see out of the window, yet also have a sense of privacy.

The soundtrack pumped through the speakers is pleasantly backgroundy; the waiting staff are very polite and knowledgeable; the iPhones given to the children on arrival mean that for them, the lunch experience is extended playing of Temple Run, Fruit Ninja and Angry Birds Star Wars  punctuated by occasional plates of food that they rather like, giving the adults some rare precious "us" time.

If it feels a bit like family-friendly formula-dining, it needs to be said that the formula is actually very good - which is no mean feat.

And popular, too; shortly after our arrival, the place fills up and thereafter, there is a regular stream of people being turned away.

We persuade the children to put their games down to focus on the menu and choose their food and drinks.

Learning that the tempura machine does not get switched on for another half-hour, I have to re-think my planned starter and side dish - yerba smoked beef is suggested and we agree.

We also order some flatbreads and dips - the breads are a little cardboardy and rustic, but the dips are freshly-made and very good: one aubergine puree, one with smoked paprika.

The yerba-smoked beef turns out to be a fusion twist on carpaccio - wafer-thin slices cured with wasabi and served with soy sauce plus a cress-and-shaved-Parmesan garnish. 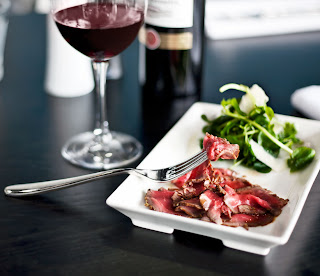 The beef is tender and utterly delicious - even if the Asian flavours deliver more in-yer-face intensity than wine-friendly elegance and subtlety.

The wine list itself is a bit of a mixed bag - labelled as either "Nice" or "Very Nice", they are from characterful "value" locations (Spain, Languedoc) with some Argentinian thrown in for good measure. I decided to stay with the theme and pick some Malbecs by the glass.

The first, a Malbrontes Malbec rosé 2010/11, is dark, almost orange in colour and whilst it has plenty of Malbec spiciness, is rather low in acidity and so does not stand up well to the strong food.

I try the others' drinks and am much more impressed - Mrs CWB's Berry Bellini is nicely sharp and fruity, whilst #1 child's Mango Passion smoothie is creamy and delicious. #2 child has gone for Coke which matches perfectly with his main of children's burger and chips. 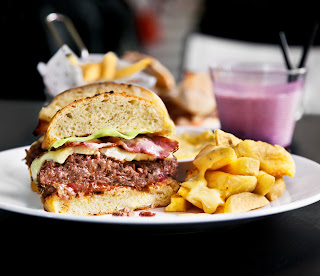 For my main, I have opted for Lomito - an Argentine bistecca alla fiorentina, it is a brick-sized slab of cow, seasoned only with salt, pepper and the briefest of contact with a searing griddle. Served extremely rare, it is perhaps the best piece of beef I have ever had in this country - tender, juicy, full of flavour and, Mrs CWB notes approvingly, no excess meat juices.

I have no idea how they manage to achieve all this, but I am taken back to memories of wonderful steaks in Austria, Italy and Romania whose like I have never previously found in this country. The blue-cheese sauce that accompanies is very good too. 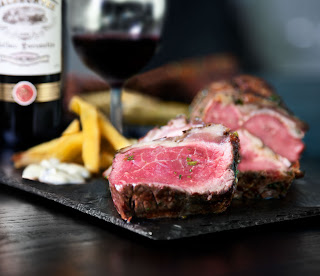 Mrs CWB has opted for Tapa De Cuadril, strips of beef flash fried, ordered well-done and which she also declares to be her best-ever steak experience.

Continuing the theme, #2 child has steak too, from the children's menu and eats it all up - which tells you everything you need to know.

My wine, an El Supremo Malbec 2011/12, proves much better than the rosé, with fruit, spiciness and good acidity to cut through the meat. The accompanying fat chips are not, I sense, cooked from scratch on the premises whilst the causlaw, fresh and well-made with spring onions and red cabbage, sits in a heavy sauce that is more "beer-food" than "wine-friendly".

That those chips are also served in little mini-frying baskets is a sign both of attention to detail and also of style over substance which perhaps serves as a metaphor for CAU in general.

After my monster steak, I feel like one of those Savannah big cats in a documentary on wildebeest, wanting only to roll over and sleep for the remainder of the day, but duty calls and we peruse the dessert menu.

Mrs CWB opts for the lightest, a white chocolate and lavender mousse which is indeed both impressively light and tastes of lavender.

#2 child goes for a gooey chocolate fondant and, once he discovers the hot, oozing centre, is happily occupied spooning it down at a great rate - his chocolately chops and broad grin a sign that he is in five-tear-old heaven. The last thing he did that was this much fun was Gagnam Style at a half-term roller disco.

#1 child's Churros with dipping chocolate sauce are, I'm told nonchalantly by Mrs CWB, exactly as they should be ("they're street food, dear"), but still rather disappointing - a bit like deep-fried All Bran sticks.

My membrillo tart is said to be an Argentine take on a Bakewell - it is well-made and perfectly-cooked but lacks the almond bitterness and raspberry sharpness of the Peak District original.

However, the addition of a latte and a dessert Malbec provide the required elements to make the dessert work as a whole.

The sweet wine is by far the best of the three and, along with the Lomito, a highlight of the meal - lusciously sweet, but with spiciness, complexity and good underpinnings it is exactly what a sticky should be.

As it is a sunny day, we opt for an afternoon stroll through Cambridge and over the river via one of our favourite colleges. I point out that the turrets on St John's College Chapel are the ones Young Man can see from his bedroom window.

His five-year-old head, however, is full of Fruit Ninja and the gooeyness of his chocolate fondant so he just wants to run across the Bridge of Sighs.

I'm still not sure what to make of CAU - some elements are very good indeed; in fact, most are and there are some really nice touches.

But the quality is not uniformly high and it lacks a certain individuality that other upmarket chains such as Hotel du Vin and Pizza Express on Jesus Lane manage to achieve; for all that the meat is superb, the Argentine slant feels a bit painted on in places.

All I can suggest, then, is that you go for yourself and make your own mind up as to whether it's your type of place - just be sure get there early as it's proving very popular.

We ate at CAU as guests of the restaurant.