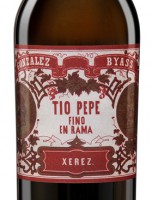 Earlier this week, I was a guest of Hal Wilson, owner of Cambridge Wine Merchants, for a Tio Pepe tasting.

Presented by winemaker Antonio Flores and MD of Gonzalez Byass, Martin Skelton, the event was billed as a Fino Masterclass, although we ended up also trying Amontillado and, a first for me, Palo Cortado.

I had met Hal early to kick around some ideas and we then were joined on our table for the tasting by fellow Cambridge-based Wine Blogger, Vinoremus, whose take on the evening is here.

Antonio started by explaining that the company was founded in 1835 by a failed banker and potato-farmer named Gonzalez who named the sherry after his Uncle Joe ("Tio Pepe" in Spanish).

Byass, by the way, was the name of the importer tasked with selling the first barrels to make their way over to the UK.

An early adopter of the solera system for blending and aging sherries, the company remains family-owned to this day.

The sherries all came in pairs to highlight the differences between them - the first pairing was a comparison of a standard Fino with the company's rather special En Rama.

In standard spec, the Fino is a pale, dry, refreshing fortified wine and with no primary or secondary fruit aromas, the experience is all about tertiary or "evolved", pungently tangy aromas of yeast and pastry-shop, with a hint of varietal almond, and overall finesse.

Sherry takes quite a bit of fining and clarification before bottling to remove all traces of both live and dead yeast and make it stable. However, the En Rama sherry is taken from the centre of the solera where it is at its clearest and therefore needs minimal fining and, as a result, is the closest thing to a barrel sample you'll find.

The flor yeast grows thickest and imparts the most flavour during milder weather in spring and autumn; this year's En Rama was bottled around Easter when it was unusually chilly in Spain - much cooler than an unseasonably warm Cambridge, in fact.

As a result of all this, the En Rama has more colour and is much more intensely flavoured - like the standard Fino but turned up to 11 (or even 12 or 13 ...).

The other side of this reduced processing is that the sherry needs to be consumed much more quickly - it has an optimal shelf life of just 3 months compared to around a year for the standard Fino.

With its finesse and good acidity, Fino is a great match to cut through the rich, salty local food in Spain and we were served jamon iberico, chorizo, manchego and olive oil with bread for dipping in CWM's funky and very stylish seating area.

The next two sherries were Amontillados - a 10 year-old AB and a 30 year-old Del Ducque.

Amontillado is a darker style of sherry which has partially oxidised due to the flor dying off and allowing the air to come into contact with the wine.

The AB was a pale gold / straw colour with more flavour from the wood of the solera.

The Del Ducque was a much darker, burnt sugar colour with nutty almond aromas on the nose, vanilla from the oak, a darkness from oxidisation and also a more intense concentration.

During its 20 years of oxidising in barrel it gains in alcohol content due to evaporation and this in turn leeches more of the aromatic elements out of the wood, giving aromas of spice, tobacco and antique shop.

There is a touch of bitterness but overall the wine is fresh, smooth and elegant.

The final pairing was a couple of Palo Cortados, for which there is no formal definition, but is generally a wine that starts off destined to be a Fino, but rebels against its destiny and ages oxidatively as an oloroso.

The 12 year-old Leonor was amber coloured and had aromas of dried fruits, nuts, orange marmalade. It had a rounded, almost sweet finish due to the presence of glycerol which would normally be consumed by the flor giving Fino its bone-dry texture.

Palo Cortado is perhaps not the best place for an enthusiastic novice to start - it has a somewhat challenging oakiness, with prominent tannin and woody aromas, but will match well with game, pate or kidney dishes.

The Apostoles 30 year-old Palo Cortado was a deep mahogany colour with aromas of prunes, figs and raisins. It is blended with 10% Pedro Ximinez and, although this adds quite a high level of sugar, the wine is so intense that the sweetness seems only a hint - it is certainly less challenging than the Leonor and almost too easy to enjoy. Given this sweetness, it would match well with Stilton or other blue cheese.

All are worth seeking out, but it has to be the Fino En Rama for its barrel-sample depth of flavour.