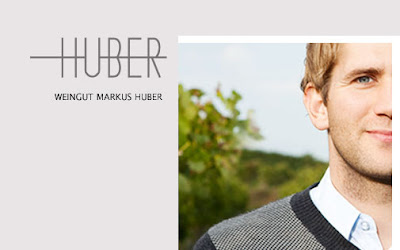 Described as one of Austria's star winemakers, Markus Huber is a 10th-generation winemaker based in Traisental, just south of the Wachau.

Decanter have called him a wunderkind (he is just 31) and he was best white wine producer at the International Wine Trade Fair in 2006.

Huber is part of the Austria's Fine Brands group headed by Michael Thurner, and I was lucky enough to meet with the wunderkind himself and chat about the wines.

We started with a Traisental Grüner Veltliner from 2010 which showed lots of varietal GV character on the nose with aromatic white pepper, lentils and celery.

Made from grapes grown on limestone, it has a ripe, tropical pineapple acidity in the mouth and feels rounded.

The single vineyard Obere Steigen, had a half degree more alcohol, is made from 35 year-old vines and felt more complex.

The GV from Alte Setzen was made from 57 year-old vines picked in mid-October to late November and aged for five months in large, old and very neutral acacia barrels dating from the 1960s. This had less on the nose, just some elderflower aromas, but was peachy and more mouthfilling.

A GV from Berg, a hillside at 400m altitude, was made from later-harvested grapes resulting in a crisp but rounded acidity with exotic fruit and a rich fullness.

An entry-level Riesling from Engelreich was medium-bodied with good apples-and-pears acidity.

The final wine, a Riesling from the same Berg vineyard as the earlier GV was from grapes picked three weeks later than the Engelreich and felt very different - it was riper, fuller and fleshier yet still focused and pure with a touch of complex grippy, thick-skinned phenol from late harvesting.

Recommended wine - for the fullness and complexity, it has to be the Riesling Berg.

Later in the day, I also watched Markus taking part in the AccessZone event.