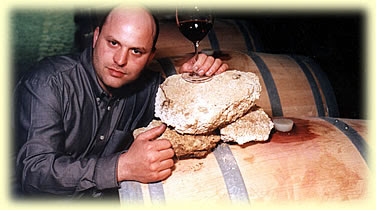 At the London International Wine Fair yesterday, Kurt Angerer took me through his range of wines from Kamptal in Lower Austria.

Described by his UK importer Noel Young as a winemaker who is really hitting his stride, Kurt had a range of 2010 Grüner Veltliners bottled just a few days before the show from his vineyards just north of the Wachau as well as some other varieties from earlier years.

For me, tasting the different wines was a lesson in vintage and terroir, and especially basic geology, as Kurt explained how the different soil types express themselves.

Another aspect of terroir here is altitude - Kurt's vineyards are at altitudes of around 200m but just behind them are the foothills of the alps which go up to 600m, meaning that cool air flows down in the evening lengthening the growing season; some of these racy and fully dry wines were picked at the end of November just a few days before the winter snows fell.

We started with his "Kies" ("keez") Grüner Veltliner - the full name for this soil type is kiesling meaning "gravelly", but people confused it with Riesling, so it became "kies". Light and crisp, with pure fruit and focused acidity, the wine had minerally finish.

The Grüner Veltliner "Spies" ("shpeez") is grown on granite and has a more intensely mineral finish as a result.

The "Loam" is grown on loess slightly further south and at lower altitude had a softer, more rounded feel of peach and melon.

The "Eichenstaude", grown on a mixture of gravel and limestone was harvested late and had a fuller, more warm-climate feel, again with lots of peach and melon.

Moving on, the Riesling "Donatus" from the milder 2009, grown on a mixture of gravel and granite, had a limey acidity and again prominent minerality.

Kurt explained he was showing the 2009s as the 2010s are still aging to temper the high acidity from the coolness of the vintage.

The Ametzberg Riesling, grown on granite, was racy and very mineral.

After the focused intensity of these native varieties, the soft, rounded feel of two French grapes (again from the slightly warmer 2009) was a welcome diversion - a Chardonnay aged in new French oak was buttery with good structure.

A "V10" Viognier, aged similarly, was ripe and rounded with peach and apricot, but also structured.

Kurt explained that he started growing Viognier to add into his Syrah-Viognier and had bottled up what he didn't need for blending.

Naming the wine proved more difficult as the Austrian authorities do not officially recognise "Viognier" as a name and disallowed "Viognie" as too similar. "V" wasn't possible as another producer uses it and although he settled on V10, he has decided to change that after finding a drink called "Vio".

We then tried a range of Kurt's reds all grown at warmer, lower altitudes than the whites - although not as cool as 2010, 2009 was still a difficult vintage and the three reds from this year were all a little pale and light - the Zweigelt "Barrique" had typical cherry fruit and a grippy finish.

The St Laurent had a nose of spice and red berry fruit, a pepperiness on the palate and a grippy finish.

The Pinot Noir was pale and woody-mushroomy with a lovely soft texture.

Kurt's final wine, a Zweigelt "Granit" from the much-warmer 2008 was darker in the glass and felt much richer and fuller with cherry fruit and vanilla from aging in 100% new French oak.

All Kurt's wines are available from Noel Young in Cambridge.

Recommended wine, the GV "Loam" for its balance of precision, pure fruit and rounded mouthfeel.