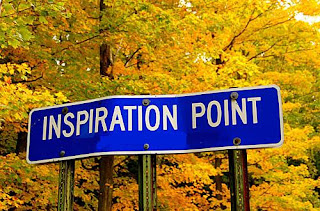 Debra Meiburg MW recently tweeted about needing inspiration to keep her tasting notes from sounding just like everyone else's.

At the time, I responded in 140 characters or fewer suggesting reading lots of wit and humour.

On the same day, Jamie Goode tweeted about the number of wine bloggers around now compared to when he started, noting that competition is a good thing.

These two points got me thinking about the nature of inspiration.

For me competition is a great spur to inspiration, and reading the humorous and witty metaphors of other writers helps keep things fresh.

It is generally acknowledged, for example, that the output of The Beatles as solo artists never quite matched what they achieved as a group and to me this is at least in part because as solos artists they lost the element of competitiveness.

If the genius of Penny Lane derives from it being Paul McCartney's answer to and attempt to outdo John Lennon's superb Strawberry Fields Forever, then one of the weaknesses of The White Album is that is it merely a collection of under-developed solo works by the individual members working in isolation.

I also find inspiration can come from reading non-wine writing; two regular sources of witticisms and clever metaphors that I find particularly useful are back issues of UK's Q Magazine (especially contributions from David Quantick) and anything by love-or-loathe TV presenter and author Jeremy Clarkson.

I have also picked up some useful descriptors and phrases from a number of sources and if I occasionally find myself instinctively falling back on these more than I should, I start reaching for the Thesaurus to search for synonyms.

Some words are bog-standard for wine-writing and pretty much used by everyone, such as fruit, minerality and crisp and manage to find their way into most reviews.

Other, more unusual and interesting descriptive words are more idiosyncratic - at this point, I should acknowledge and thank Debra Meiburg MW for giving me the word "woodsiness" (for the truffley aromas in a Pinot) and Robert McIntosh for "funkiness" (the same thing).

A phrase I use a lot to describe well-made, fruit-driven, easy-drinking but unchallenging and not spectacular wines is "crowd-pleasing" and I originally got this from Matt Boucher of Cambridge Wine Merchants.

There are, of course, almost as many aspects of a wine to describe as there are wines themselves - origin, terroir, variety, vinification, aromas, even the social and geo-political background to the country of origin (think South Africa and Eastern Europe).

Of late, I have found myself becoming more interested in the texture and structure of wines - how they feel in the mouth due to tannins and acidity - and find myself assessing these aspects as much as the various different fruit aromas.

Yes, a wine might have notes of elderflower and citrus, but does it have complex, ripe fruit acidity or a harsh finish ? Are the tannins balanced and grippy ?

If I am struggling with a tasting note, I often cast around other writers to see how they approach the issue for inspiration - I'm sure all professional copywriters do this and maybe some of them even come across my blog.

This weekend, for various reasons, I was looking at Waitrose's "weekend" magazine article on wines for "barbecues, picnics and parties" and a whole series of my most commonly-used words and phrases jumped out at me: crowd-pleasing, grip, structure, crisp acidity and fruit flavours.

There's a saying that once is chance, twice is co-incidence and three times is "enemy action".

I don't know what the conclusion is for five, but it does get me wondering if Waitrose are reading my blog for inspiration.

If so, I am hugely flattered.

Of course, it could all just be a coincidence and, in any case, I don't own a monopoly on these words; rather, I originally borrowed them myself from other people and merely liked them enough to use on a regular basis in my own writing.

But it's a nice thought that perhaps Waitrose, casting around for inspiration, found them on my blog and also liked them enough to put in their own magazine - after all, imitation is the most sincere form of flattery.