A Wee Dram on Burns Night 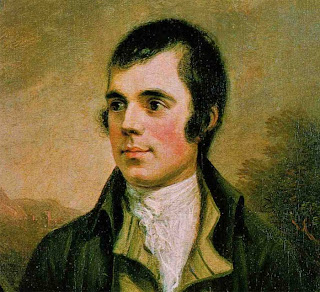 I first got started on whisky in, of all places, a bar in the Bulgarian capital, Sofia. My host, the Managing Director of our local agency there had previously worked for a whisky client and gave me a brief introduction as we sampled several different types and ages.

These days it's rare for there not to be a bottle of single malt in the CWB household to round off a particularly good meal, so I was looking forward to the Cambridge Food and Wine Society's recent Burns night whisky tasting.

For the event, Society Chairman Steve Vincent divided the evening into two parts, starting with a look at the effects of aging in different casks.

Scotch single malt whisky, for the uninitiated, is basically beer distilled into a spirit and then aged in old oak casks, often previously used for sherry, for 3 years and upwards. The distilled spirit is initially colourless and somewhat raw, but gains colour and softens out over time. Much of it also evaporates, making older examples darker and more intense (see here for more details from Wikipedia).

We first tried a blended whisky called Pig's Nose - blended whiskies (often from grain, rather than malt) are generally not held in as high regard as single malts, quite correctly in my opinion. This one was surprisingly good, smooth and mellow with a creamy feel, but still not as good as a the single malts that followed.

We started an entry-level 10yo Glenmorangie which I have had before and which is a good, honest whisky in a light and refreshing style.

The next three expressions were all 12yo but aged for their last two years in different casks - oloroso, Port and Sauternes.

Dry oloroso, with its nutty, toffee, sultana and slightly spicy aromas is a natural complement for whisky and works very well.

I was less convinced by the Port-cask-aged Quinta Ruban and felt the red wine and eucalyptus port flavours did not really enhance those from the whisky.

Maybe it's the power of suggestion, but I liked the Sauternes-cask aged especially - I like dessert wines and the hints of rich, tropical fruit and orange marmalade sweetness of the dessert wine matched well with the freshness of the whiskey.

The rest of the group that evening were less convinced that this was the best of the three, but I was pleased to note that whisky author Michael Jackson (not the deceased pop star) takes the same view.

After pausing for a traditional Burns supper of haggis, bashed neeps and champit tatties (but thankfully no bagpipes), we moved on to a vertical tasting of Highland Park, located in the Orkneys and the most northerly Scotch whisky distillery in the world.

Highland Park's style is full-flavoured, peaty and smokey as befits its remote island origins, but a little less in-yer-face than, say, Islay malts.

The first expression was a 40% 12yo; all Highland Park expressions are aged in sherry casks, so as well as age the only other variables were an increasing alcohol level and an increasing proportion of first-fill casks, starting with 20%.

The 43% 18yo with 45% first-fill casks was darker and more intense, with rich oak, toffee sweetness, hints of marzipan and a smokey finish and has apparently won Best Spirit In The World - twice.

However, the finale of the evening proved to be something quite special - a 25yo Highland Park, 48% and 50% first-fill casks. Very rich and mature, with smoke, honey and fudge, it had a phenomenal length and finish.