The New World vs The Old‏ 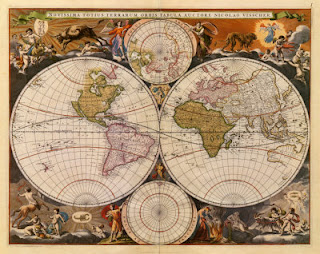 In the olden days of the 1970s, wines were divided neatly into the Old World (Europe) and the New (everywhere else).

It was an easy distinction, based on old certainties - Old World wines were classics and New World wines were upstarts; a world in which James Bond could identify a sherry as a '61 ("I wash refurring to the yurr of the originul solera ... eighteen shixty one").

It is also a distinction based on an idea so prevalent that it was not even really acknowledged as existing (since there was no alternative view) - that of terroir. One bought a wine originating from Bordeaux or Australia, not a Cab or a Syrah.

Terroir, a unique combination of soil, climate and aspect that makes a wine speak of a particular location, seems to swing in and out of fashion as an idea.

To the erstwhile iconoclastic wine-makers of the New World it was a notion to be rubbished as being no more than a mere marketing con by the Old World to keep prices for their inferior wines artificially high.

Tell everyone that Bordeaux is just a blend of Cab and Merlot (mostly) and you can then sell them you Aussie Cab-Merlot blend as a similar style of wine or at least a familiar grape variety.

The New World (plus several sympathetic and equally iconoclastic wine writers) did a huge amount to demystify the world of wine in those days.

They also introduced modern techniques to allow grapes to be grown in a wider range of places (yes, terroirs) and sharpened up wine-making practice to produce, clean, fruity, well-made easy-drinking wines that could be quaffed without food, did not need years in a damp cellar to mature and which were easy to understand and immediately enjoyable.

But then things seemed to go too far; New World wines became overly alcoholic, overly fruity and monolithic, overly branded and overly discounted. Look at a row of supermarket New World wines and see how many are on special, deep-discount offer. Try one with your eyes closed and see if you have any idea where it comes from.

Ripe ? Fruity ? Sweetish ? It could be from Australia, California, South Africa or Chile. It could even be southern Italy, inland Spain or southern France.

And there's the rub - the New World did such a good job of finding new places to grow grapes that the flying wine-makers found they could teach their techniques to hitherto unsuccessful parts of the Old World in the antipodean off-season and Europe's New-World Old World was born.

At the same time, Old World France began funking up its wine labels for greater shelf-appeal and, in the ultimate irony, copied the New World approach of putting the grape variety on the label; no more stuffy Burgundy, this is now a Chardonnay actually.

Next, the New World discovered terroir - yes, some places do produce better wines as a result of the soil types and climatic conditions - and ever more precise delinations were drawn up in hitherto broad-brush regions.

A pioneer of this in Chile for example is Rafael Urrejola of Vina Undurrage (see here) who has created a series of wines called Terroir Hunter which do reflect the terroir where they are grown.

So, where does that leave the Old World / New World distinction now ?

Certainly it is no longer a geographic distinction if just a few miles inland in a cool-climate valley, Chile can produce crisp, steely retrained whites that taste like they could have come from the Loire.

It is now much more a distinction of style - cool-climate restraint and texture vs warm-climate aroma and fruit - and is reflected in the alcohol level of the wine.

Debra Meiburg MW told me about the following simple test for novice blind tasters to establish if a wine is from the New World or Old - hold the wine at waist-level and raise it gradually; if you can smell the wine before it reaches your chin, it's New World.

It's a great test, but increasingly will tell you more about style than provenance.