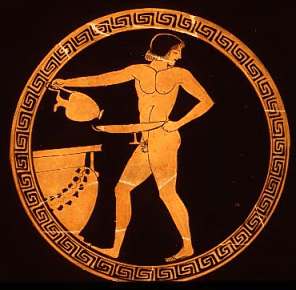 Most wine books I checked out in advance of this recent tasting at the Cambridge Food and Wine Society politely suggested that Greece's history as a wine-producing country rather overshadows its present. They have a point: Greece more or less invented wine-production in Europe some several thousand years ago with references to wine dating back to the C9th BC in Homer. Moreover, the Greek word for wine, oinos, has also come variously into most European languages as vin, wein, vino and so forth, as well as giving us the words like oenology (the science and study of wine and wine-making).

Compare all this to a tawdry glass of retsina on a cheap package holiday and its easy to see why wine books have, until recently at least, harped on about Greece's history more than its present.

That is not to say there are not good wines made in Greece, but as Nick Kontarines of wine merchants Anglo-Hellenic Services pointed out to the Cambridge Food and Wine Society, they Greeks themselves are not always the best advocates of their own wines. With a mischievous sense of irony, he cited examples of Greek producers refusing to label their wines in Latin script because "nobody in the UK buys them"; well, perhaps the reason they don't buy them is precisely because they are in Greek script ...

Nick took us through the various wine regions and native grape varieties of Greece but as a first-timer to the world of Greek wines, it was, well, all Greek to me. What surprised me about many of the wines and especially the whites, is how light and fresh they were - given the typically torrid conditions of a Greek high summer.

The answer was in the elevation of the vineyards - the higher up, the cooler the growing conditions and the lighter the end result, despite the southerly latitude. It helped to think of the wines in terms of equivalent international styles and so the first wine, a Moschofilero, was likened to a Muscadet - light, lemony, with a touch of mineral backbone -whilst the Robola was the Greek equivalent of a Sauvignon Blanc, crisp and herbaceous.

The rose was actually a mixture of red and white wines, the only wine other than Champagne that may do this - and that seemed to be its most notable feature.

Nick's business partner took us through the reds, three of which were were from the native Agiorgitiko grape which means "St George" and produces fruity wines with spice and plums - the best of these was from the Gaia estate. Oak-aged and made from low-yielding vines it was the highlight of the evening and has scored 96 Parker points.

If any Greek wine other than retsina has an international profile, it is probably the (red) dessert wines made from Mavrodaphne; the example we tried was rich with raisins and figs cut through by a refreshing acidity.

The wines were accompanied by various Greek dishes prepared by the Society's committe and included  - alongside the obligatory olives, feta and pita bread - some delicious gigantes plaki (baked haricot beans) and melitzanosalata (aubergine dip).

The Wines - prices as quoted on the night