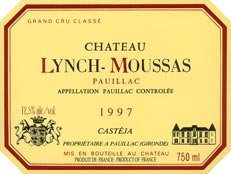 I was recently given a bottle of Lynch-Moussas, a 5th-growth Bordeaux from Pauillac by Alex Barr of Genlead (thanks Alex!). According to a couple of experts I checked with, the 2004s are not set for long aging and are ready for drinking more or less now, so the other day we opened it up with a simple roast-beef dinner.

Bordeaux is my favourite source of red wines generally, but not having had a "classed growth" wine before, I was intrigued about what to expect - how would it be different from every other, non-classed, Bordeaux I have had ?

The nose showed initially rich blackcurrant followed increasingly by a delicious woodsiness and forest floor, with hints of vanilla and spice; the texture is very smooth texture, almost custard-creamy, and the finish is long and concentrated,with a gentle tannic grip and a slightly herbaceous edge. There is lots of juicy bramble fruit and a slight smokiness, almost like beeswax church candles.

What was, for me, most surprising about this wine is how soft and approachable it is, even at just 6 years old - I had expected something rather chewier and more tannic. Beyond that, it was a very well-made and enjoyable wine, but not stellar.

And with hindsight, plus a bit of research on the Internet, that stands to reason - according to the website 90plus Wines:

These are good, solid scores and reviews, but not earth-shattering.

The Wine Doctor, Chris Kissack, says: Chateau Lynch-Moussas (Pauillac) 2004: Dense fruit here and overtly toasty oak marks the nose of this wine. On the palate there is a good grip and depth, with lots of firm structure and an appealing depth of berry fruit with a nicely composed substance. Good vigour, lots of ripe tannins, good acidity too. It is perhaps a touch on the lean side but it has potential for sure. From a 2004 Bordeaux tasting at four years of age. 16+/20

At first, I had wondered whether I was missing something, whether I should have been more impressed by the wine, whether it should have felt like it was in a completely different league from all else - on reflection, it is a very good and enjoyable wine, albeit from a less than stellar year, perhaps with more finesse and elegance than force of personality.