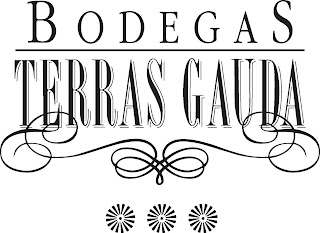 Terras Gauda, based in Spain's Galicia, recently sent me a set of wines for review (along with some reds from sister winery Pittacum), so we decided to invite some friends round and work our way through them along with a plate of salamis, cheeses, olives and bread from local deli, Limoncello.

Galicia, being geographically due north of Portugal and sharing many common grape varieties, climatic conditions and styles, is perhaps best thought of in terms of its Iberian neighbour rather than of Spain - certainly for the whites which are more Vinho Verde than Big Spanish White.

Galicia has five Denominación de Origen (DO) appellations: Monterrei, Rías Baixas, Ribeira Sacra, Ribeiro and Valdeorras. Prices, where given, were quoted in USD and whilst it is possible to do a simple currency conversion, we concluded that a typical UK selling price would be around half the number of dollars (i.e. so $20 = £10).

I opened all the wines in the morning, leaving them with corks out but not decanted; despite the season, it was a chilly day in Cambridge, so the whites I placed upright in the fridge for just an hour-and-a-half before serving.

Deep gold colour in the glass, it looks oaked but is not.

Made from Caino Branco, it is floral and sweet with some spice on the nose.

The palate adds a honeyed touch and good depth - there is some residual sugar, balanced by high acidity.

Persistent finish with a final note of something hot, ureic or even slightly harsh at the very end.

We felt that, with the price and unusual style, this would not be an easy-selling wine and would need to be hand sold in an independent or restaurant.

Match with spiced, creamy dishes such as potatoes dauphinoise, fennel risotto or prawns in a creamy sauce.

Made from 100% Albarinho, it is pale gold in the glass; the nose is aromatic and herbaceous with green apples and pear drops.

The palate is lemony with ripe pineapple acidity. With good savoury depth, this was well liked and deemed a solid crowd pleaser. Has numerous medals.

The flagship wine of Terras Gauda, it is made from a blend of mostly Albarino, with some Loureira and Caino Blanco.

Golden in the glass, it is more complex than the previous wines with apple fruit and white flowers on the nose with hints of ripe peach.

On the palate, there is a touch of petillance, and it feels more poised, precise and mouthfilling. With a precise, balanced finish, it is complex and accomplished.

From 100% Mencia, the wine spends eight months in French and American oak.

On the nose, there is lots of oaky vanilla spice, ripe bramble fruit and violets.

The palate itself is a little disappointing after all this - with simple sweet raspberry fruit and more sweet vanilla and toffee on the finish.

It's well enough made and feels mouthfiling, but with high alcohol and sweetness, it's perhaps more of a wine for the US market.

After a small sample each, we wondered whether this would be better with some more air, so I poured it into the decanter - but no-one later felt inclined to go back to it.

We wonder whether the poor showing is just the innate limitation of the grape variety, so I tweet @FringeWine and ask his opinion - he replies "Not a huge fan. Wrote about some a few months back. People tell me it reminds them of cab franc...never really saw that".

Made biodynamically and with spontaneous fermentation from wild yeasts, it is aged for 16 months in 50/50 old and new French oak.

On the nose, there is a potent mix of iodine / sulfur / rubber inner tube along with the bramble fruit and sweet vanilla spice.

On the palate it is ripe and rounded with sweet dark berry fruit and vanilla; reasonably long, the finish is grippy, even when re-sampled after a couple of days.

Made from 100%, single estate Mencia, this is a much more complex wine, with a nose of iodine, plum and cherry fruit, something vegetal and a touch of spice.

The palate shows ripe, dark berry fruit and vanillary dark roasted spice; with juicy acidity and soft integrated tannins, it is complex and long on the palate with a persistent finish.

Immediately after the two ripe, sweet reds before, this wine did not show so well and seemed a little underwhelming.

However, when re-sampled alone, the complexity was much more evident and I don't think our earlier feeling that the grape might be inherently simplistic was right.

I also note that I rated an organic Spanish Mencia a while ago - here.

We did not score the wines, but as the picture shows, we drank more of some than of others and the true test of a wine is which one you go back to after sampling them all.

With 12.5% alcohol, all the whites were light, fresh and suitable for early drinking. By contrast, the reds were much bigger beasts with high levels of alcohol, sweetness and oak.

The sweetness of the Bierzo and lack of interest on the palate ruled it out for us, but may make it more popular on the American market.

The La Mar, Quinta Sardonia and Abadia were well-liked, but overall favourites were the Pittacum Aurea and the O Rosal. 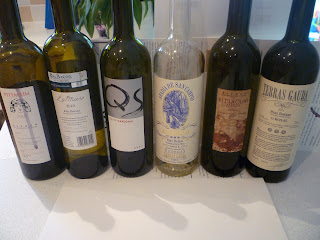 All wines provided for review - a plate of meat, cheese, olives and bread for four from Limoncello costs around £15.

Here is what WineRambler has to say about these wines, here.