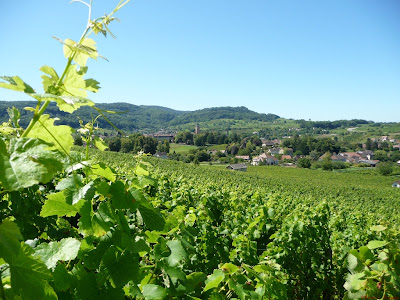 Last weekend, I went to a tasting hosted by Wink Lorch of organic wines from Jura, a region whose wines I previously knew only by reputation as being "a bit different".

Somewhat contrarian by nature, I have historically sought out the unfashionable, different and unusual in wines as well as other areas in an attempt to be anything other than mainstream. However, even the little that I have read on Jura has been enough to let me know that these are wines to be approached with caution.

An enthusiasm for Riesling and sherry - a sure sign of wine-geekery - is positively mainstream in comparison to liking Jura wines. In musical terms, Jura is the Prog Rock of wine: different, old-fashioned, unfashionable and divisive of opinions. 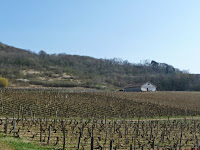 Also like Prog Rock, Jura wines are unlikely to appeal immediately at first acquaintance and take time to reveal their charms.

Wink, who has a base in eastern France and is a regular visitor to the area, had invited a number of bloggers to try these unusual wines at Adiva restaurant in London's East End, with Riedel tasting glasses provided courtesy of Sensible.

Also there, and likely to tweet or write up their impressions in due course were Arnold Waldstein, Caroline Henry, Ryan Opaz, Gabriella Opaz, Simon Woolf, Heather Dougherty and Nayan Gowda.

I wrote up some thoughts as an overview of Jura, so what follows in this post is my detailed tasting notes, starting with two sparklers.

Note: the word oxidative comes up a lot in these reviews and I use it to describe the impression of the sharp, piercing acidity and brown apple-flesh flavour of the white wines, even if many of the wines are ouillé, or "topped up", meaning that they do not actually age fully oxidatively.

Cremant du Jura Brut Domaine Pignier: made from 100% Chardonnay, this was perhaps the most conventional wine of the evening, light, fresh and crisp, with some floral sweetness and a fine mousse.

Cremant du Jura Domaine de la Pinte: despite its traditional-method fermentation, this had yeast and oxidative notes on the nose and a rasping, sour-cherry acidity on the palate and finish that demands a food accompaniment

In another break with convention, we tasted reds before whites.

Arbois Poulsard Uva l'Arboisiana 2011 Domaine de la Tournelle: rosé coloured and with a combination of sweetness and spice on the nose, this smells like Chinatown on a Saturday night. Light on the palate, it is mainly about the acidity and is a rosé to all extents and purposes. Good length, but not complex.

Arbois Pupillin Ploussard La Chamade 2009 Philippe Bornard: more complex, this has the same mix of fruit sweetness and Chinese spice, reminiscent of a good, light Pinot, some grip on the finish

Trousseau Les Corvees 2010 Domaine de l'Octavin; with settling by gravity and no filtration, this was somewhat cloudy; again, the fruit sweetness and Pinot-esque red berries.

Trousseau 2010 Domaine Pignier; on the nose, this was to me distinctly sulphurous with industrial gas-leak. Nayan Gowda disagreed and felt it was merely a touch reductive. On the palate, more sweet, red-berry fruit and some grip on the finish.

I asked Wink about the sweetness of the reds and she explained that they are all fully dry with no residual sugar, explaining the lack of tannin might create the impression of sweetness.

My own theory is that there are complex fruit sugars which are not measured as residual glucose or fructose, but which register as sweetness on the palate.

Arbois A la Capitaine 2009: the last of the reds, noticeably darker, pale but recognisably a red wine; less on the nose, a touch of oxidative and wet dog, more mouthfilling and longer on the palate. This turns out to be 2/3rds Pinot Noir, 1/3rd Poulsard with a few drops of Trousseau. Ironically, the least "Pinot-esque".

Cotes du Jura Chardonnay A la Percenette 2010 Domaine Pignier: zippy, zesty lemon and lime with some rounded fruit sweetness, spitzy and sherberty, a hint of oxidative character, some firm grip on the finish

Arbois Chardonnay 2008 Les Corvées sous Curon Domaine de la Tournelle: oxidative hints on the nose and on the palate, rasp of lemon-lime acidity, a touch of sherbert, less sweetness with a grippy finish 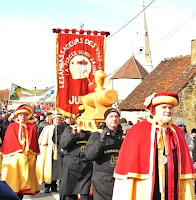 What I got out of the evening was more of the distinctive "Jura style" than any specific preferences; however, based on my notes, my recommended wines are: