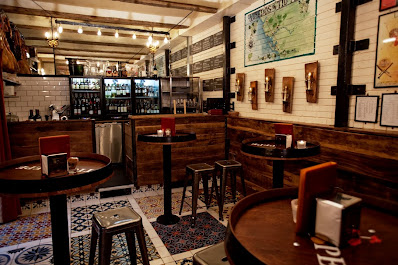 For almost a decade now, I have passed through King's Cross twice daily; ongoing re-building work to the various tube station entrances has been something of a theme, but in the last few weeks, the make-over of the station itself has revealed new walkways, a plaza with juxtaposed period and modern styling and the opening up of the original glass roof and frontispiece.

All in all, it makes the 90 or so seconds I spend walking across the concourse that little bit more pleasant, but outside the confines of the station, King's Cross is still more of a place you pass through - or depart from - than a destination in its own right.

Turn left out of the station and the side-street to The Guardian's offices leads you past a row of presentable-enough coffee chains but there is little here to make the heart beat faster. 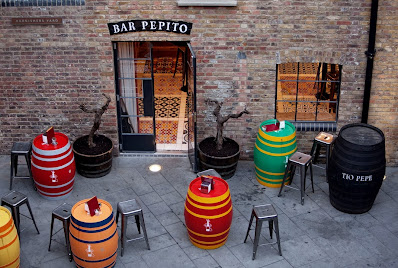 Except, perhaps, for Bar Pepito - a broom cupboard of a sherry bar tucked well away from the inner ring road in a little courtyard.

From the outside, you are most definitely in a soulless part of mid-town London, but stepping across the threashold takes you into a rustic Andalusian bodega.

Much like The End of The World, the infamous Sherry Revival is heralded by believers and mocked by deriders in equal measure, but in practice it is just as elusive and irrelevant as the apocalypse itself.

I first went to Pepito's early last year after seeing the twitter buzz around its launch. After struggling merely to find the website, making a booking proved impossible and it took a visit in person to realise why; with just five up-turned barrels for tables, it only takes around a dozen people sitting on bar stools for the place to feel at capacity and anyone else wishing to join the party needs either to stand or sit outside.

All of this gives Pepito's a lively, edgy feel that is miles away from sherry's stereotypical homeland of vicars and maiden aunts.

Choices for food and drinks are simple and limited but of uniformly good quality - the best of all worlds in my book. The sherries, like the wines, are mostly from Gonzalez Byass and available in all the major styles with generally just a cheaper and more expensive option.

The wine list is well-made, crowd-pleasing, food-friendly modern Spanish and the food is mainly meats and cheeses with sundry other tapas - plus a couple of dessert options.

So far, so textbook; but for me, what makes it special - other than the convenient location for my train home - is the focus, attention to detail and consistent quality of, well ... everything really. 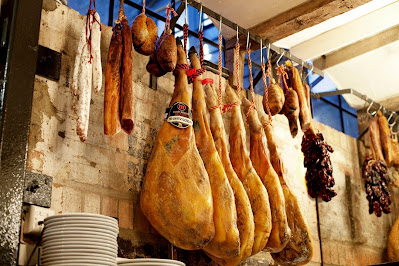 It is perhaps the perfect advertisement for sherry - simple, well-prepared food served unpretentiously in a lively atmosphere.

I've made several visits to Pepito's since it opened for post-work catch-ups with friends and we typically start with a bottle of crisp, pungent Tio Pepe fino and a mixed plate of meat and cheese - rather like a rock star who eventually ditches the eye-catching outfits for a cleaner, simpler look, I find keeping things simple, classic and well-made is my preference these days.

With no overt fruit characteristics and an elegant linear acidity, fino or manzanilla sherry perfectly cuts through the richness of salami, cheese and bread dipped in oil. 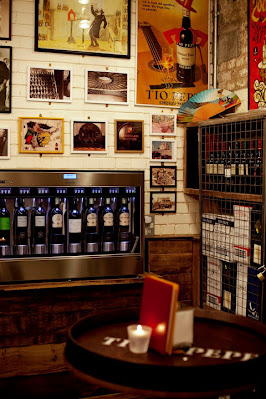 It is however, very much a food wine and makes no sense on its own except as an aperitif, so avoid the schoolboy error of ordering a second bottle once the food is finished and instead move onto something a little more complex and rounded, either from the list of table wines or one of the darker sherries.

Typically, I make a move back to Cambridge before 9pm, but on one occasion, having missed a train after a night out in central London and an hour to kill before the next one, I wandered over to Pepito's. The bar was still going strong at nigh on midnight and I sat outside on an unseasonably warm evening pleasantly sipping an Apostoles Palo Cortado.

Palo Cortado is a wine that technically should not exist; intended to be a pale fino, it rebels against its destiny and ages oxidatively.

It is also traditionally the wine-maker's baby and is said to be the wine by which you should judge a sherry house.

The Apostoles is dark and complex with dry roasted nut and antique leather aromas. The addition of a modest amount of raisiny, treacly Pedro Ximinez gives it a rounded feel and it seems less sweet than it actually is.

It was not quite the same as gazing over the shimmering Med in Sanlucar de Barrameda, listening to the strains of flamenco and knowing that the cooling, salty sea air is helping the flor grow more thickly to produce manzanilla, but for a moment, mid-town London was quite a pleasant place wait for a train.

Wines and sherries are generally available by the glass; a plate of meats and cheeses for two plus a couple of bottles of sherry costs around £50.