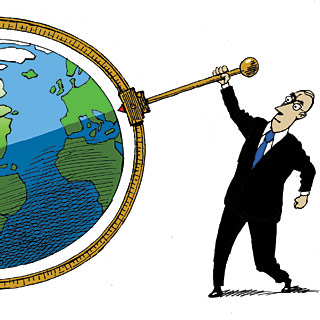 Influential wine blogger Robert McIntosh recently posted up a short video of himself talking about "influence, elitism and wine" - here.

Most of what he has to say is interesting and worthy of note, but I find myself taking exception to a couple of items.

He starts by talking about whether wine is elitist or aspirational; to my mind there is precious little difference between the two, other than the respective mental associations that they invoke - elitism suggests posh nobs looking down at you whilst aspiration suggests honest-to-goodness, hard-working people looking to improve themselves.

Take away the element of perceived snobbery and it's basically the same thing, defined only by whether your viewpoint is "us" or "them".

As to wine snobbery, people having been talking about its demise for so many years now that it hardly feels like new news.

On the trends in social media, I think Robert makes a lot of sense - especially where he describes the tendency for people to hold conversations and carry out debates on Twitter rather than on individual blog posts.

And his next point, too, is well made - that to measure online influence you now need to look more at the discussions on Twitter than merely at the number of comments on the blog post itself.

It is a much-quoted saying attributed to John Wanamaker that we know half our advertising spend is wasted, we just don't know which half.

As a saying, it is both incisive and nonsensical at the same time - which is of course what makes it so great and so widely quoted.

The holy grail of advertising is not so much the crafting of superb messages - although this is hugely important - but rather targeting them at the right people.

However great the creative work, there's no point showing adverts for luxury goods, for example, to people on low incomes who simply cannot afford them.

Much effort has gone on in the advertising industry into identifying your target group - the people who make the purchasing decisions for the product you are selling - and targeting them ever more accurately.

If students are the main consumers of instant snack foods, for example, then it makes sense to put adverts for these products on when students are likely to be watching television - usually during daytime television if my time at university was anything to go by.

Of course, the advertiser is also paying to broadcast the same ad to other people who watch daytime TV but have no interest in instant foods - middle class housewives (or house-husbands) who eat fresh food, for example, and on whom the cost of the advertising is wasted.

Unlike TV, radio and press - the classic staples of advertising - the internet allows far greater targeting and measurement of audience through tracking of things like click-through (I see a banner ad in my web-based email account for something, click on it to find out more and hey presto you can measure that I've responded to it).

So Robert's comments on the ability of social media to track and measure influence online are both perceptive and relevant.

However, he then says something that is complete and utter gobbledygook and taken at face value in context, completely undermines his whole point - and yet has been widely quoted.

Speaking about the various algorithmic programmes such as Peer Index and Klout that can objectively measure his level of influence online by looking at for example, how many people click to open a link he has tweeted, re-tweet it or comment on it, he says this:

“I have no influence. People who follow me make me have influence, so effectively they are the influencers.”

Now, as I've said before, I like Robert and I think he's generally a sensible chap, but this particular comment really is a piece of tosh on so many levels.

Let's start by defining influence as the ability to get a reaction to one of your tweets - clicking a link, responding or re-tweeting.

You don't have to be right or wrong to be influential, you don't even need to be liked (as any boss knows) - you just need to be talked about and responded to.

Accepting that assumption, we can now measure objectively a person's online influence by monitoring their twitter traffic and reactions to it.

As a comparison, Jancis Robinson MW has a Peer Index score of 65 whilst Debra Meiburg MW has a score of 57.

So, we can objectively measure online influence and rank people objectively according to their scores.

These scores are objective and measurement is standardised, so the only variable is the quality of the assumptions in the original algorithm and the scope of measurement - a factor known as garbage in - garbage out; that is, if your original assumptions are rubbish or if you are measuring the wrong things, the data you collect will be meaningless.

So, to recap, I am an influencer if people react to my tweets, blog articles or Facebook posts and those who react are therefore the influenced.

So, to say that those who react are the influencers is not a statement of humility, it's just downright wrong.

I suggested this to Rob via Twitter and his response was to talk about assumptions of "intrinsic" influence and say that the people who follow him had been influenced by others to do so.

This is again irrelevant in the context of measuring online influence.

It does not matter where your followers come from - if they are passive they count for naught, but if they respond to you, they are influenced, wherever they have come from.

Likewise, it does not matter whether you craft your own messages or just pick up on those of others - if people react to what you say, wherever you get it from, you are influential.

CEO of PeerIndex, Azeem Azhar, weighed in saying that the value of Robert's comment was more in the spirit of humility of it than in the deconstruction.

Translation: it's such a nice thought, let's not bother ourselves with minor details like whether it's actually factually correct or not.

I wonder whether he takes the same attitude to business planning and monthly management results.

I mean, here is a business leader in the online measurement and analysis industry who seems not to understand the difference between the person who influences and the person who is influenced.

And when this is pointed out, pooh-poohs a fundamental error in understanding by saying the emotional context of the statement is key, not its factual accuracy or otherwise.

If somebody who is not associated with your company gets in a bit of a muddle with his words about your product and says something that is nonsense - well, it happens.

However, to pick up on it, write it down and send it around the twittersphere suggests you don't really understand what is being said.

And when the error is pointed out, to say the statement should not be taken literally and that the sentiment is key is not exactly a convincing display of being on the ball, is it ?

In the grand scheme of things of course, it's a minor slip of no real consequence - and the exit from it is actually quit elegant.

But, still, it demonstrates two things - firstly, it was something of an own-goal by Azeem, an unforced error; and secondly you never know who will pick up on what you say on Twitter - or elsewhere - and subject it to the scrutiny of a bit of common sense.