A Day's Sailing - and a Piper Heidsieck Brut NV‏

Another week, another last-minute invitation - this time it was not wine-related, but the opportunity to go sailing in the Solent off Portsmouth with London legal firm Lewis Silkin at the Advertising and Brands Cup in support of Helen & Douglas House hospice.

After an inordinately early start (Cambridge is a long way from the sea), we eventually arrived in Pompey as it's known locally, got dressed in waterproofs and had the obligatory Health-and-Safety briefing from our crew from OnDeck.

In Kenneth Graham's The Wind in the Willows, Ratty declares "There is nothing quite so much fun as messing about on the water", which rather gives the impression of sailing as something lazy and idyllic for a hot summer's day.

In this case, it was early autumn with some sunshine and a light breeze, which made for more or less perfect conditions for a group of mainly novices and amateurs such as we were.

However, there was little in the way of idling around as we had to raise sails, drop sails, move from one side of the boat to the other at speed, clip and unclip things and generally work pretty hard to go not very far in any one direction.

Sailing a 40ft yacht with three sails and a crew of seven meant that there was a job for pretty much everyone with no-one's role being that of "ballast" - so, demanding and exhilarating more than idyllic.

The event has run for three years now in its current format and is organised by London lawyers Lewis Silkin for advertising and marketing services clients - chief organiser Brinsley Dresden, who invited me as his guest, heads up the marketing services practice and is a keen yachtsman himself.

I found my introduction to the world of sailing - with its confusing jargon and complex procedures to be carried out quickly but in the right order somewhat reminiscent of learning to drive over two decades ago.

It is also somewhat clubby and as an outsider having to get up to speed not just with the basics but also the subtle analysis and minutiae of strategy and tactics, I perhaps experienced what it is like for a novice wine enthusiast to be amongst a group of serious afficionados.

However, what struck me most about the day was the sense of it being a team effort.

For me, wine writing is a very solitary exercise for much of the time, whilst my day job as a company director is very hierarchical, so although I manage groups and get to meet some very talented and visionary people, I rarely get to work as part of a large, diverse collaborative team these days.

By contrast, the hierarchy on our yacht was completely flat with just the skipper in charge getting us all to fulfill different but interrelated roles to keep the boat moving in the right direction at speed.

So, the sense of achievement in working with mostly strangers whom I had met for the first time that day to complete new and challenging tasks in a real-time situation is something that I have not experienced probably for several decades - since sports lessons in my school years.

As a topic, it is of course very much the stuff of team sports and at a primaeval level takes us back to our collaborative hunting instincts, so no wonder that it is so beloved and fruitful a subject for motivational speakers and captains of visionary industries.

Corporate hospitality is going somewhat out of fashion these days - my industry is as famed for its long, boozy lunches and expenses account excesses as for its superb creative work during the golden age of the 1980s.

Several recessions, a wave of corporate acquisitions and consolidations and the rise of client procurement teams later, the industry has become more cost-conscious and ostensibly hardworking.

However, it remains a people business - as creative industries must be - so networking and team-bonding with clients are still important as sources of new business and for improving existing working relationships, even if they need to be rather more restrained and have a more demonstrable return on investment than in times gone by when company jollies were merely the done thing rather than an indulgence to be justified on financial, strategic and reputational level.

And whilst breakfast briefing seminars on industry hot topics with nothing more intoxicating on offer than coffee, pastries and networking small talk may feel more appropriate to these straightened times, getting to know a group of people over the course of a day whilst working together to achieve a common goal brings you together in a very different way.

And after the hard work of pulling ropes, tacking and jibing, returning to dry land to chew the fat over a few drinks is the obvious thing to do.

In a corner of the jetty, overlooked by the Spinnaker Tower, there was a Champagne reception, trophies for the winners (our team came third) and the usual - but no less worthy for it - charity raffles. 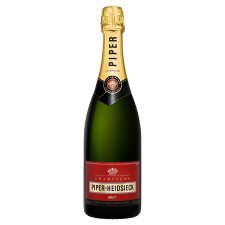 The Champagne, I was pleased to note was a Piper-Heidsieck Brut NV.

A mushroomy colour in the glass, it has a pronounced Pinot nose with red berries and fruity aromas of organic, vegetal decay and farmyard; it seems to announce "I say ! Look at me, what ho !" in an eccentric but aristocratic sort of way.

However, despite the initial exuberance, it can't hide its breeding and the palate is rich, savoury and mouthfilling with a fine mousse.

Outgoing and classy, as well as an aperitif, it would also work with lighter game dishes such as partridge, pheasant or pigeon.