I have been a customer of Naked Wines for around a year now and as a committee member of Cambridge Food and Wine Society, it made sense at some point to bring the two together.

So I invited Rowan Gormley, a charismatic South African entrepreneur who has worked as the right-hand man of charismatic British entrepreneur, Richard Branson and founded Naked Wines in 2008, to come and present some of his wines to a mixture of Cambridge Food and Wine Society regulars plus a group of Naked's own customers.

It proved to be a fascinating evening - for a number of reasons, mostly unrelated to the wines themselves as most fitted into, for me, a fairly standard pattern.

I find that Naked's wines have a very strong sense of identity or "house style" - well-made quaffers with generous up-front fruit, but not overblown in style, they are perhaps best categorised as "restrained New World style", coming generally either from the New World itself or Europe's New-World-style regions such as southern France or inland Spain.

We started with a Sachetto Prosecco NV; with simple, straightforward pear fruit, a ripe palate and a touch of yeastiness developing on the nose, it was a good example of what an enjoyable Prosecco should be.

With an eye to the mood of the audience, Rowan asked how many people preferred Prosecco to Champagne before going on to explain how many Champagnes can be just too acidic to be enjoyable as compared, say, to more drinkable Proseccos. 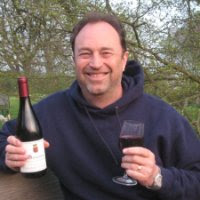 This was just the first of a series of communications master strokes from Rowan who clearly understand his audience, for whilst good Prosecco can indeed be more enjoyable (and cheaper) than poor Champagne, no Prosecco that I have ever tried has matched really good Champagne for complexity, intensity or sophistication.

With 15 wines to get through, we sampled them in pairs, generally from the same producer and usually a red and a white together.

Historically, I have generally found myself preferring Naked's white wines for quality of their structural acidity rather over the reds which, for me, are a little lacking in tannic structure and texture.

However, at this event, trying reds and whites side-by-side, I generally found myself preferring the reds.

Our first pairing of wines was from South African producer Carmen Stevens - the Chenin Blanc was herbaceous and fresh with lively acidity and a gentle minerality and showed a degree of restraint and sophistication from being grown on cooler, elevated, south-facing slopes.

The Shiraz showed typical pruney fruit with pepperiness, an inky texture and some grip on the finish.

The next two wines were from souther France's Benjamin Darnault - a Picpoul and a Faugères.

I have had the Picpoul previously and whilst it is a good example of the variety, at £9.99 I find it a little overpriced for such a straightforward wine which often retails for just a few Euros on its homeland.

The Faugères I found much more impressive - mainly Syrah, it had a toasty, tarry nose with eucalyptus notes whilst the palate shows bramble fruit, prunes, liquorice with a soft texture.

The next pairing, from Spain's Carlos Rodriguez, was an Albarinho that was crisp, fresh and floral with peach and apricot fruit followed by an unoaked Rioja which showed lots of up-front varietal fruit rather than the vanilla and secondary aromas one associates with Rioja.

In another commuications coup, Rowan outlined the oaking and aging regimes of Rioja, noting that a top-level Gran Reserva will have much less up-front primary fruit than an unoaked or more lightly oaked version and that people might well find themselves therefore preferring something with less oak.

The next wine was a Loire Sauvignon from Villebois whose wines I reviewed a while ago here and here - in style it is half-way between a traditional lean Loire and a full-on tropical kiwi, so it came as no surprise to learn that it was made by a French winemaker who has spent time working in New Zealand.

Next up were a pair of Argentinians from Mauricio Lorca which were both well-made, but not to my taste - a floral Torrontes with ripe fruit sweetness and a light, juicy Malbec with sweet prune fruit.

The logic of the next pairing, a Macon Uchizy from Burgundy and a red Alentajeno from Portugal, was not immediately obvious until Rowan pointed out the theme here was the use of oak.

The Macon Uchizy I thought was very impressive - the nose is toasty, whilst the palate is buttery-oatmealy with a creamy, smooth and rounded texture, balanced with fresh acidity and a toasty finish.

This was, for me, the most interesting white wine of the night - perhaps because it is the most different from Naked's usual style.

I was less impressed by the Portuguese wine which showed bramble fruit, black cherry and oaky tannins, but this is a country whose wines I feel I still haven't quite "got" yet.

We followed this oaky pairing with something designed to refresh palates - a Castillo de Tafalla Angels Selection Rosé which I reviewed here and was very impressed with once again.

Our final pairing was a couple of hot-climate big reds - a Cabernet Franc from Chile's Kimbao which I had expected not to like (albeit from fairly limited experience of Cab Franc) but which I enjoyed, perhaps because it was a far-from-typical example, and a sweetish Ishtar Shiraz with a Pinot-esque nose of decaying compost that I was less impressed with.

At the tasting, I sat next to fellow blogger Davy Kurniawan who blogs as Vinoremus and is an IWC judge, comparing notes as we went along rather like two avid trainspotters.

I also managed to get a very insightful appraisal of the Cambridge Food and Wine Society's website from someone who does this sort of thing for a living and whose website is here.

I note that for a nominal fee, she will advise whether one's blog stands any chance of being turned into a book - a process one client describes as being like root canal surgery, painful but necessary; which reminds me of the old adage that during a goldrush, the best money is in selling spades.


Angels get 33% cashback on all purchases - details of the Angels scheme is here: