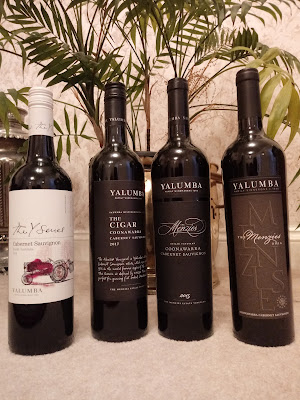 A masterclass in Cabernet Sauvignon from Yalumba winemaker Louisa Rose
South Australia's Yalumba winery describes itself as the Heart and Soul of the Barossa, Australia's oldest family owned winery, making amazing wines since 1849.
Cabernet Sauvignon is one of the world's greatest and most widely planted grapes. And yet, it is rarely made into a varietal wine, more often being blended: with Merlot (and others) in Bordeaux, and with Shiraz in Australia.
Yalumba winemaker Louisa Rose explained the factors that make their part of Coonawarra suitable for making varietal Cabernet Sauvignon.
- when grown elsewhere, Cabernet Sauvignon usually shows a "doughnut" tannic structure, with a missing mid-palate
- Coonawarra has fertile terra rossa soils (for fruit) over limestone (for elegance); unlike other vines, Cabernet Sauvignon does not benefit from being stressed
- Coonawarra also has the cooling effects of the Southern Ocean, despite being around 50 miles inland
- to get fully ripe tannins, Cabernet Sauvignon needs a long, cool (by Australian standard growing season); too hot and the vines will shut down, resulting in green tannins
Highlights of Louisa's talk
Based halfway between Melbourne and Adelaide and about 50 miles inland, Coonawarra is cooled by air from the Southern Ocean. Yalumba is family-owned by the sixth generation of the Hill-Smith family.

Cabernet is Australia's third most-planted grape after Shiraz and Chardonnay; winemaker Louisa Rose considers it to have great elegance, poise and longevity. Where most of the world blends Cabernet, Coonawarra (where Yalumba is based) produces Cab that unusually can be made into a varietal wine.

Cabernet Sauvignon often needs blending to fill out its mid-palate; the tannins take time to ripen and cooler years see better ripeness of tannins than warmer ones.

Louisa describes Cabernet as defined by its tannic structure and seamless through the palate, with Coonawarra Cabernet having a herbaceous eucalyptus note. Louisa's aim is to make wines that are both ageworthy but also approachable in their youth.

The winery's history with Cabernet goes back a long way, possibly to as early as its founding in 1849, but certainly there are records of purchases of Cabernet vines in the 1860s and 1870s. The winery started purchasing of Coonawarra vines the 1920s and continued until the 1980s.

Originally, Cab was blended with Shiraz and a varietal Cab was not produced until the release of The Menzies, launched in 1986 as a 100% Coonawarra Cab from bought-in fruit; within a few years, the family had bought the vineyard and set about gradually improving the quality.

Coonawarra is famous for its terra rossa soil over limestone; the fertile terra rossa clay gives nutrients and the limestone gives good drainage. It is influenced by cooling air from the southern ocean.

All the wines were well-made and enjoyable with something of  French accent; the entry-level Y Series is fresh and vibrant; the Menzies complex and ageworthy.

Fruit mostly from Wrattenbully, blended from different regions; all unoaked, all wild yeasts, vegan-friendly to reduce particle, and therefore flavour, extraction. The wine is fermented in stainless steel, but with some oxygenation to give more roundedness. Intended  for young drinking, but will last.

The name is a reference to the cigar-shaped-strip of Coonawarra terra rossa land; grapes grown on the Menzies vineyard, mostly Cab vines planted in the 1970s but improved since then. More approachable, less complex than Menzies; traditional style, aged in French oak, with not as much new oak as the top cuvees, released earlier. Traditionally made, cool-fermented, occasionally some Hungarian oak for spice and backbone. 2017 was cool and dry. Has a splash of Malbec added.

Two very different vintages, made from older vines. Bottling under cork allows for different evolution vs screwcap; cork was chosen more for a branding statement than for aging purposes.

2014 had a terrible spring, giving low yields; it was a long season, picked later than usual; the wine is now showing cedar and leatheriness; lovely tannins; small quantities. Complexity and savouriness.

2015 was a milder year, with purity of fruit and long tannins; picking was only slightly earlier than 2014.

Peter Ranscome's review and tasting notes: Why Yalumba's cabernet will make you sit up and take notice - Scottish Field