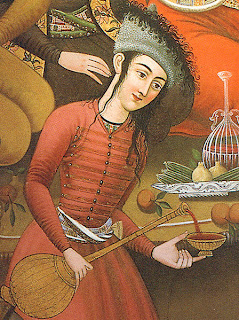 In a first for the Cambridge Food and Wine Society, Saba Alai - originally from Teheran, the capital of Iran (formerly Persia) but living in Cambridge for almost two decades now - recently gave a tasting of traditional food from her homeland.

Saba's day-job is with a local company, but as an enthusiastic and skilled cook, she kindly agreed to prepare some traditional Persian dishes and talk about their history and provenance.

Although Persian food does not naturally have courses - people traditionally sit cross-legged on the floor and eat from a tablecloth, picnic-buffet style - we began with a simple starter-style dish, composed of herbs (coriander leaves, tarragon, flat-leaf parsley and chives) with feta cheese all wrapped up in a thin, but leavened, flat-bread.

This very ancient dish actually felt rather 21st century, much like a simple deli-style wrap, and I found the saltiness of the cheese brought out the flavours of the fresh herbs and bread without the need for any additional dressings.

Despite giving the world wine in around 3,000 BC, and wine historically having cultural and symbolic traditions in Persia, these days alcohol does not feature in Persian cuisine and so we had another traditional drink to wash everything down - pomegranate juice.

The one served on the evening, from Mahan (sourced from Al Amin deli on Mill Road), worked really well with the food as it had a rich, refreshing acidity which reminded me of the food-friendly sourness of Italian wines and prompted me to ask my neighbour, a bio-chemist at the University for a quick lesson on the different acids in wine.

As mains were laid out, Saba explained a bit more about Persian food - given its ancient origins, perhaps it is not surprising that many Persian foods have a particular association with religious festivals and events. The religion of ancient Persia was Zoroastrianism until the Arab conquest of 651 AD which (unlike Islam) does not forbid any foods but does dictate that the flavours used in different dishes should contrast with each other, with sweetness and sourness being a favourite.

As befits a country on a large land mass, Persia has influenced and been influenced by neighbouring countries - naan bread, a staple of many a so-called Indian restaurant, is actually Persian in origin and being soft, white and fluffy was the food of the courtiers where the darker, heavier, unleavened chapatti was more of a peasant staple, whilst the slow-cooked, spiced stews were similar to Moroccan tagines.

If specifically Persian restaurants are somewhat unusual outside of Iran, that is largely because Iranians do not go to restaurants much except for rice and kebab, which is their equivalent of fish-and-chips - a standardised, low-rent meal which is best cooked in a restaurant.

However, although most Persian cooking is done at home, typically Persian women only learn to cook in their first year or so after marriage when they regularly phone home to ask for instructions on how to prepare dishes for their new husbands.

Typical Persian main dishes are combination of rice with meat, lamb, chicken, or fish and some onion, vegetables, nuts, and herbs, as well as fresh green herbs along with fruits such as plums, pomegranates, quince, prunes, apricots, and raisins.

On this occasion our mains included two types of rice, a chicken stew with apricots, a deliciously tender lamb stew using some local free-range lamb and two yoghurt dishes that legend says were devised around 630 AD for Queen Purandokht who subsequently gave her name to them.

Whilst some of the dishes were spiced with cinnamon or saffron, unlike foods from neighbouring Pakistan or India, none was hot with chilis which do not feature in Persian cuisine.

Also, there is no tradition in Persia of preserving meat by salting it; rather, meat is simply cooked immediately after preparing, or (to put it another way) kept alive until needed. 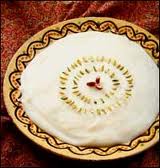 For dessert, we had Ice in Heaven - a blancmange flavoured with rose water. The origin of the name is that, if ice existed in heaven, this is what it would taste like, and it was served with tea flavoured with cardamom, baklavas and delight (specifically not Turkish delight).

Saba explained that many middle eastern foods that are now familiar in Europe came via Turkey and so got labelled as Turkish in the process even if their origin was somewhere quite different.

Interestingly, many of the dishes and customs were familiar to me from my years spent living in Russia and Ukraine which may seem a long way from central Asia but were influenced by Iran as a trading partner on the other side of the Caspian Sea - indeed, Saba's grandfather was born in Moscow to Iranian traders based in Russia and spoke Russian as his first language.

The picture at the top of this article shows a Persian woman pouring wine from 17th Century Persia, from a wall painting inside the Chehel Sotoun palace, Isfahan, Iran