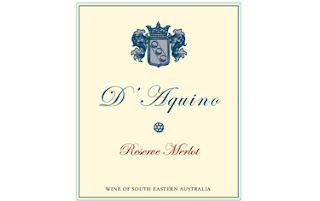 This seems to be another in a series of Naked Wines that needs a bit of time to open up and then shows good, well-structured, juicy fruit acidity but not too much in the way of tannins.

It came as a free offer from Naked when I bought 11 other wines - add in the £40 voucher for signing up as an Angel and 33% cashback, plus free delivery as the list price of the wines totalled over £100, and the resulting price per bottle was under £4.

Merlot produces a range of styles depending on the climate in which it is grown - in Bordeaux, where it is generally blended with the more tannic Cabernet Sauvignon, it gives red berry and plum aromas to the resulting wine, sometimes with a touch of tobacco, forest floor and truffleyness.

In the warmer climates of the New World, it tends to produce more of a glugging wine, with blackberry and black cherry aromas.

This wine from South East Australia is a ruby-garnet in the glass and although it gives some hints of ripe berry fruit on the nose when opened, it is initially quite restrained.

With a few more swirls, the ripe fruit becomes more prominent with a hint of forest floor and some really toasty oak, but there's not too much in the way of textural backbone on the palate.

Sampled a day later and it has become more harmonious and balanced, but feels overpowered by a beef lasagna that I am having it with.

With some grip on the finish, though, it's not quite light enough to be a quaffer even if cannot stand up to anything too meaty, so I try it later with a simple Italian salad of mozzarella and tomatoes, garnished with olive oil, some rather special balsamic vinegar and freshly chopped parsley.

Suddenly, it all falls into place - the juicy, fruity acidity matches with the sweetness of the tomatoes, cuts through the cheese and olive oil and is not overpowered by the balsamic.

At a different time of year, it might also match well with a stew with sweetness from some root vegetables, but right now, Cambridge is enjoying an unseasonably warm start to spring and I get to have this in the garden.

Winemaker Rex D'Aquino from Orange, New South Wales,  is a third-generation descendant of Italian immigrants to Australia from Sicily and that perhaps explains the rather "Italian" style of this wine - it's mainly about the acidic structure and really shows its best with food.

It would also work with a tomato-based pasta sauce.