Hotel Le Rapp in Colmar - and some wine-buying‏ in Alsace 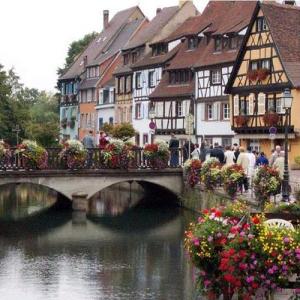 A while ago, whilst on a driving holiday to Alsace, we stayed for a couple of nights at the hotel Le Rapp in Colmar (pictured below right).

Our route to Alsace had taken us from Cambridge, across the Channel and via castles and monasteries in Belgium and a trip over the Vosges.

Colmar, at the southern end of the Alsace Wine Route, is in many ways like a smaller version of the more illustrious city at its northern end, Strasbourg - and all the better for it.

Like Strasbourg, it has brightly painted timbered cottages with steep, gabled roofs, historic squares and a waterway system that shows off the best of the city.

Also like most of Alsace, it has been fought over by France and Germany and, whilst it shows influences of both countries, these days it feels very much French, albeit with a distinctly German accent.

The natural border between France and Germany is not so much the river Rhine to the east of Colmar, but the Vosges mountains to the west, low lying to the north and rising to over 1,000m at their southerly end.

These provide a rain shadow for Alsace's vineyards at the foot of the mountains on the easterly side; the higher the mountains, the more pronounced the effect and in general the better the wines.

We spent two days based in Colmar exploring the pretty nearby wine villages of Kaysersburg, perhaps the prettiest village in the area, with its hilltop ruined castle and storks' nests, Riquewhir and Eguisheim which has a cobbled, circular walk around the edge of the village.

Unlike its northerly neighbour, Colmar is a much easier city to see in a day than Strasbourg and feels more relaxed, less bustling, perhaps due to the absence of Eurocrats.

Any visit to the city must include the short boat trip along the canals, known as La Petite Venise, which are not as extensive as Strasbourg's waterways but more intimate, especially when viewed from the small, silent battery-powered punts rather than a bateau mouche.

We had chosen our hotel from the Logis de France guide book as providing a high standard of food and were not disappointed.

In the elegant restaurant, the food was superbly well-prepared and showed the influences of the surrounding areas of Germany and Burgundy - after a slice of pork pie for an amuse bouche, starters were escargots in butter and wild Alsatian garlic.

For mains we chose chicken in a creamy sauce with girolles mushrooms and the local speciality, choucroute; a French take on the German sauerkraut, it was a plate of hot pickled cabbage, spiced with peppercorns and caraway seeds, topped with pork in various forms - frankfurters, pork chops and pork belly. Like much Alsatian cuisine, it has the heartiness of German food with the finesse of French.

Following this, dessert was one of my favourites, a clafoutis - a flan made of marinaded cherries baked in a rich batter.

To drink, we had something local, of course - a Pinot Blanc from Alsace.

Pinot Blanc, a mutation of Pinot Noir whose spiritual home is next-door Burgundy, produces wines that are light and refreshingly crisp with apples-and-pears acidity in its youth but which fill out into something bigger, more rounded and serious with a couple of years in bottle, as this one proved to be.

The wines of Alsace are typically both riper, drier and more mouthfilling than their German counterparts, and thus intended more for the dining table than the garden.

Sadly, wines from Alsace are not much seen in the UK - with their Teutonic fluted bottles, and often Germanic grape varieties they perhaps seem rather unfashionable these days.

And yet, the dry whites are the kind of wine that really should be popular now - food-friendly and well-structured with ripe fruit aromas and crisp acidity, no oak but enough body to stand up to well-seasoned modern international cuisine and a straightforward AOC classification with varietal labelling, what's not to like ?

However, they are also generally priced a little above everyday-drinking levels which tends to put them into specialist wine merchants rather than supermarket shelves.

The best-value examples are generally to be found in Alsace itself where well-made examples can be had for around €6, which these Euro-parity days is closer to being around £6 rather than well under a fiver as it used to be a few years ago.

Alsace is superbly well set up for wine tourism, with its wine route of pretty villages almost all of which seem to have numerous producers offering samples and selling produce. As noted, it's best to head to the southern end if you are looking to buy.

Returning to our hotel after a day's sampling and purchasing, we found the food on the second night to be equally impressive.

Our amuse bouche was again a slice of pork pie, but this time served in a hot stock. For starters we chose melon wrapped in thin slices of cured ham and a green salad served with lardons.

Our main was a piece of flaky white cod in a creamy mushroom sauce with another favourite dessert of mine, creme brulee.

The wine we chose for this evening was again local and slightly heavier than the previous evening's - a local Pinot Gris. Also a mutation of Pinot Noir, it produces a range of styles from crisply acidic in a cool climate, such as northern Italy where it is localised into Pinot Grigio, to big, rich, ripe and aromatically perfumed when fully ripe in Alsace.

This one had the body and structure to match with our food without being overly perfumed, as Pinot Gris can become when extremely ripe. It also had a silver medal from a local competition in Colmar.