Tasting with Bacchanalia at Perse Girls 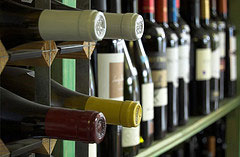 With my head still a little fragile from a charity event the night before, I introduced Paul Bowes of Bacchanalia in Cambridge to a group of parents at the Perse School for Girls, part of the Stephen Perse Foundation and not to be confused with a similarly-named school also in central Cambridge.

The event had been organised by the school's PFA partly as a fund-raiser and partly as a social event for parents of pupils at the school; the rest of the Committee had done a great job of preparing the school hall with Christmassy table decorations and it looked very festive.

I have seen Paul speak before at the Cambridge Food and Wine Society and know what an entertaining presenter he is; and, although the best bet is usually just to let him get on with whatever he wants to do, the PFA had decided to add in a fun element to the tasting by including a Call My Bluff element.

The first wine Paul presented was a Mont Rocher Viognier; I have been very impressed with Mont Rocher's Carignan previously, but to me Viognier is something of a poor man's Chardonnay and probably would not be so popular without the current fashion for zesty, unoaked whites.

That said, it was very well made, light and refreshing with lemony elderflower and was a suitably  pleasant aperitif before moving onto something more serious.

The next wine was quite different - a rich, ripe, full-bodied but completely dry Pinot Gris from Alsace. Wines from Alsace are perfectly suited to the local cuisine and match well with rich pork dishes or tarte flambee.

We then moved on to the first mystery wine - with a strong, herbaceous nose, it was immediately recognisable as a Sauvignon Blanc and a New World one at that; the obvious best guess being that it was from New Zealand.

However, in a version of the heads-or-tails party game, Paul gave us the option of Chile or South Africa. Guessing as much by association, and based on bottle shape, as through expertise, our table plumped for South America and a price of under £15. We were only finally stumped when it proved to be a 2009 with around 18 months' bottle age and not a 2010 as we had guessed.

Although Paul had warned me he would be making up the format as he went along, this approach actually turned out to be highly instructive, with a series of ever more specific choices to work through.

First guesses of Sauvignon and New World were fairly straightforward, but the subsequent questions on country, vintage and price forced me to focus on specific aspects of the wine that I do not normally give so much attention to.

It's actually a great way to learn about wine and worth repeating as a format - as well as much less daunting for novices than just an unknown wine and a blank piece of paper.

The first of the red wines was a Chilean Pinot Noir from Nostros - Pinot is never a value-wine, and prices for good examples usually range from steep to hair-raising.

It was a pleasant surprise, therefore, to find how good this one was given its price tag of under £7 - with cherry fruit and hints of typical Pinot truffleyness, plus a soft texture and good balance, it was a minor classic, in its own, lightweight way.

As with the whites, the next red was completely different - a Cabernet Sauvignon/Shiraz blend from Coonawarra, Australia. I have been disappointed with Aussie wines of late due to excessive sweetness, but this was much more balanced and serious.

Still relatively young, this wine from two quite different grapes has not yet aged enough to achieve complete harmoniousness, and Paul pointed out the minty blackcurrant from the Cab on the nose and the softness of texture from the Shiraz on the palate.

Oddly, I found myself noting a typical Shiraz nose of prunes and plums and a fullness on the palate from the Cab.

The next wine, a mystery red, was perhaps the most intriguing of the night; initials sniffs revealed a baked, warm-climate fruitiness with something savoury, almost coffee-like, as well as a distinct pepperiness. Undecided between it being a restrained New World wine or a ripe Old World one, we opted for the former, but discovered it was the latter.

From here on, all bets were off, as the palate suggested southern Rhone but the bottle shape clearly did not. Thinking of obvious New World-style parts of Europe, I guessed inland Spain - only to discover it was from Southern Italy. To add to my shame, I was wrong on age, price and grape variety and finally learned it was a £17, 2001 Negroamaro from Copertino in Puglia - with a gold medal from the Concorso Enologico Internazionale to boot.

In my defence, I can only say that the last Puglian Negroamaro I sampled (reviewed here) tasted nothing like this at all.

I don't know whether it is the power of suggestion, a result of focusing on the wines more closely or the wines themselves opening up, but in both cases I found the mystery wines going up in my estimation by the time their true details were revealed.

Well-chilled and freshly opened for the tasting, I did find most of the wines felt a little closed at the time and seemed as if they could offer more complexity and length with a couple of degrees more warmth and a few more minutes in the glass.

The final wine was also a little unusual - a 100% Pedro Ximenez dessert wine. PX produces dark wines of intense sweetness and this was no exception; it had the consistency and colour of engine oil when poured in the glass.

For this reason, PX is more commonly blended with dry oloroso Sherry rather than made into a wine on its own, with the dry wine giving a nutty, toasty, figgy complexity which balances out the intense sweetness of the PX.

On its own, this PX was an intense, indulgently rich and raisiny wine, but with a balanced and not cloying finish, which genuinely needs to be drunk in small quantities - it was like a concentrated Christmas pudding in a glass.

As if on cue, mince pies were brought round at this stage and the only thing required to make this a heavenly gastronomic match would have been a touch of Chantilly cream.

At this stage the only thing left to do was thank Paul for the event and I was reminded of something the PFA committee had said during the planning - that they did not want it to be a serious and dull tasting.

Charismatic and entertaining, with a gently ironic sense of humour and an easy-going joviality, Paul is the sort of person who could not do a serious and dull tasting if he tried. He also presented a well-thought out range of interesting and well-made and wines.