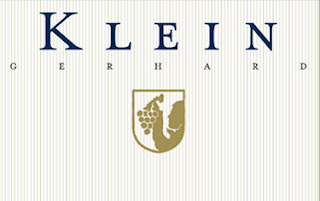 I have been a fan of Austrian Riesling for as long as I can remember; it was more or less the first wine I really decided I liked - ripe, aromatic and mouthfilling yet minerally and bracingly dry.

Over time, I have also grown to love Chardonnay's more studied and technical complexity, but I immediately took to Riesling's thrillingly racy, slatey, minerally food-friendliness.

Unfortunately, not many places do Riesling as well as (or at least in the same full-and-ripe-but-dry style as) Austria, and German examples are typically lighter, gentler and have a hint (sometimes more) of residual sugar.

That is not always the case, however, and on a driving holiday in the Mosel a while ago, I found some excellent examples from Kirchengut Wolf.

This Klein Riesling is in much the same style as the Wolf wines, but comes from the Pfalz, further south than the Mosel where the wines tend to be fuller and fleshier. It is the first of a mixed case from Naked Wines and is completely dry ("trocken" on the label).

The Pfalz - or Palatinate - is the sunniest and driest of Germany's wine regions, although not actually the furthest south. It sits in the lee of the the Haardt Mountains, a continuation of Alsace's Vosges Mountains where vines have been cultivated since the first century AD.

Weingut Gerhard Klein is situated on the picturesquely-named Weinstrasse (wine street) in Hainfeld, not far from Cambridge's twin city of Heidelberg and has a tradition of wine-making going back 350 years. This Riesling, however, is thoroughly, thrillingly modern and in touch with the zeitgeist for racy, unoaked whites.

With a crisp, minerally nose, it is mouth-wateringly slatey on the palate with flavours of comice pears, cox apples and a hint of grapefruit. On the palate, there is great mouth-filling concentration, and it is as focused and precise yet smooth and well-balanced as a BMW engine.

With a long, crisp-yet minerally finish, this is very classy, sophisticated and extremely food friendly; potential matches include meaty or oily fish (tuna, mackerel or salmon), well-seasoned roast white meats (pork or chicken) and almost anything with a buttery or creamy sauce, as well as soft and pungent cheeses.

According to the Naked Wines website, winemaker Peter Klein won the second place in Germany's Young Winemaker of the Year competition 2009. After tasting this, I'm not surprised.