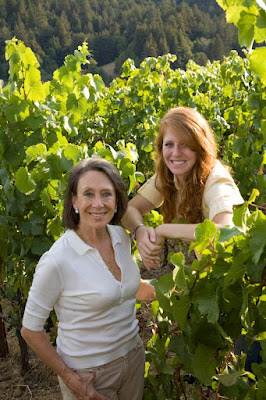 Three new vintages from the Marimar Estate's Don Miguel Vineyard in California
Marimar Torres and her daughter Cristina are, respectively, the 4th and 5th generation of Spain's Torres family; Marimar moved from her native land and founded Marimar Estate Vineyards and Winery in California's Sonoma County in the 1980s at the behest of her father, Don Miguel Torres.
The Estate features a Catalan-style farmhouse from Marimar's homeland and she brings a European sensitivity to her wines; the vineyards are in some of California's coolest sites, vineyard management is based on European methods, adapted the the Californian climate, the oak used is French and the wines are made to be refreshing and food-friendly.
Marimar's destiny was set when, after much searching, she found an old apple orchard in California. Here, she planted the 56-acre Don Miguel Vineyard with high density planting in the Green Valley, the coolest and foggiest region of the Russian River Valley, only ten miles from the Pacific.
She made her first wine, a barrel-fermented Chardonnay, and took it back to Spain for the now elderly and bed-ridden Don Miguel to sample; with uncharacteristic enthusiasm, he declared it to be the best white wine he had tried and instructed Marimar to build a winery in California.
The second wine, an Albariño, was originally planted on the Sonoma Coast, but struggled to ripen, so was grafted onto vines in the slightly warmer Don Miguel Vineyard.
The final wine is named after Marimar's daughter Cristina and is a testament to the challenges of establishing a winery in a foreign country many thousands of miles from her homeland with a small child. 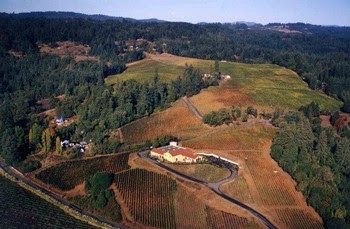 Timeline and climate
The vineyard was purchased in 1983 and planted in 1986 initially with Chardonnay (Cali Pinot and other reds had not yet become A Thing at that time); in those days, this was not wine country at all, it was all fruit orchards.
Named after Don Miguel Torres, father of Marima, the vineyard is in the Green Valley, just north of San Francisco, part of the Russian River Valley within Sonoma; morning fogs and cooling afternoon breezes support cool-climate varieties.
The fog blows in off the Pacific through the Petaluma Gap keeping the area much cooler than Napa, which is sheltered on the other side of the mountains and can grow warmer-climate varieties such as Cabernet and Zinfandel.
The soils are relatively young compared to Europe - 8 million years vs 60 - 100 million years. Historically underwater, the soils of this area are sandy with great drainage, with some clay in the subsoil of Don Miguel.
Background on the wines and tasting notes from Marimar Torres.
Marimar Estate, Albariño, 2019 (Vivino, £29.99)
Albariño has been known to produce outstanding wines in the cool, rainy climate of Galicia, in Northwest Spain. Marimar first planted the variety in her Sonoma Coast vineyard, but it proved too cold for ripening even a cool-climate variety like this. After four years, she gave up and grafted the budwood from those vines onto slightly warmer Russian River Valley estate and it is now thriving in the Don Miguel Vineyard.
white peach, tangerine and honeysuckle; luscious, ripe fruit with more fullness, lower acidity and slightly less salinity compared to a Galician Albariño from Rias Baixas; a crowd-pleaser and very popular at the cellar door
Match with raw or grilled seafood, smoked salmon, sushi or tapas.
Marimar Estate, La Masia Chardonnay, 2018 (VINMN, Vivino, Amazon, Fareham Wine Cellar, £34.99)
La Masía means The Farmhouse in Catalonia, Marimar’s home region, and her winery is designed to resemble a classic Catalan farmhouse. The vineyards 30 acres of Chardonnay are planted with three different clones with high density of over 2,000 vines/acre. The yields are low, and labour is intensive, but the vines live longer, and the grapes acquire better balance and greater concentration, as well as more elegance and finesse.
delicate and very focused, with aromas of jasmine and white peach, ripe-yet-taut apples, pineapple, well-integrated oak, acidity and minerality; rich and savoury yet crisp and mouthfilling, reminiscent of baked apple and lemon custard; long and perfectly balanced

Marimar Estate, Cristina Pinot Noir, 2017 (Vinimus, Farenham Wine Cellar, Amazon, Wine Direct, £49.99)
Named after Marimar’s daughter, Cristina, this wine is a barrel selection from a unique blend of different Pinot Noir clones that best represent the terroir and personality of the Don Miguel Vineyard and show the most potential for aging. The vineyard’s 30 acres of Pinot Noir are planted with several clones, which yield wines with complex layers of flavours.
black fruits, ripe cherries and a hint of pomegranate, with savoury notes of bay leaf and anise; red cherry and cranberry fruit, not too ripe, good acidity; great balance and silky tannins; the complexity and acidity, perfectly integrated oak and fruit augur a long life; still very youthful and primary, drinking nicely now but will gain complexity with age
Drinking nicely now, will age at least another 15-20 years.

Email ThisBlogThis!Share to TwitterShare to FacebookShare to Pinterest
Labels: USA