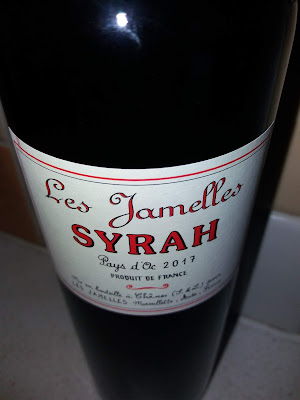 Syrah, it seems, is becoming the Chardonnay of red grapes: once a noble grape confined to a small area producing rarified and expensive classics, it has found mainstream success as an all-rounder.

Syrah is native to the northern Rhône and, like Chardonnay, the great grape of Champagne and Burgundy, was transformed from a cult hero into a superstar by Australia's warmer climate. Rebranded as Shiraz, other innovative, warm regions followed, so you now find it in California and Languedoc.

Unlike Chardonnay's neutral-but-versatile character, Syrah has a strong personality of dark fruits and spice.

This Jamelles Syrah from Languedoc is varietally typical and well enough made but for me feels a little more heavy-handed and less Burgundian than previous vintages. Some people will prefer that.

Match with charcuterie and salamis.

Email ThisBlogThis!Share to TwitterShare to FacebookShare to Pinterest
Labels: France, Languedoc, The Co-op