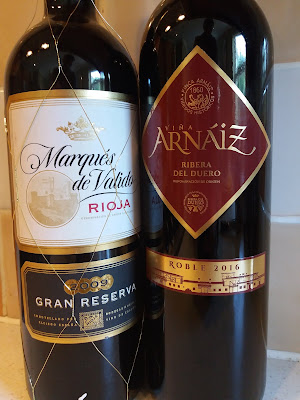 Two Spanish wines from The Co-op

Rioja and Ribera Del Duero are the two greats of Spain - its Medoc and St Emilion, Napa and Sonoma, Barolo and Chianti.

Rioja's fame is well-established; Bordelais winemakers moved to Rioja in the 1800s to avoid the onslaught of phyloxera, bringing their barrels and oaking techniques with them, and the rest is history.

Ribera del Duero's fame is much newer; barely known until the 1980s, it still is not a household name yet produces wines of amzing freshness, intensity and colour due to a fierce continental climate and high altitude.

Both these Co-op wines are great examples of their style - an aged Rioja and a vigorous Ribera del Duero.

Email ThisBlogThis!Share to TwitterShare to FacebookShare to Pinterest
Labels: Spain, The Co-op