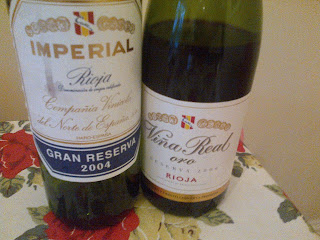 A tasting of two aged Riojas from CVNE.

Rioja is Spain's answer to Bordeaux - a big, ageworthy red that often spends extended time in oak before further aging in bottle.

Aged wines have a character that is quite different from anything else - whilst modern wines for early drinking emphasise fresh, primary fruit, aged wines have an elusive, secondary harmonious mellowness.

The grape of Rioja is Tempranillo whose bramble-and-cherry flavour profile is quite different from that of Bordeaux's Cabernet and Merlot, whilst the use of American oak emphasises vanilla sweetness.

Match with plain-roast red meat such as beef or venison.

Well-balanced on the palate with good fruit, fresh acidity and ripe tannins with still a touch of firmness - there is more primary fruit here and less aged character - a classy wine, but not quite in the same league as the Imperial. Good.

Match with roast lamb or beef.

Recommended Wine
Both are good, both are priced above everyday drinking levels. However, the Imperial - older, mellower, less primary and more elusive - is somehow indefinably better.

And if you've never had a wine that is starting to be properly mature, it is as good a place to start as any and see what all the fuss is about.

Both wines provided for review. 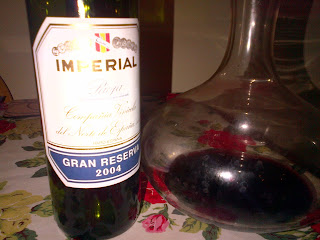