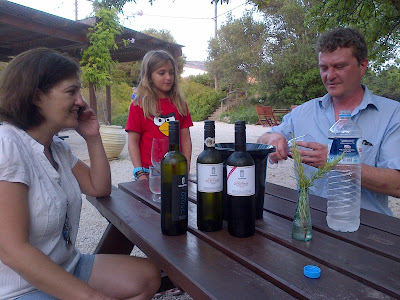 Kefalonia's Gentilini family, originally from Italy, traces its arrival on the Greek island back to the 1520s; several centuries later, in the early 20th century, the last Gentilini married a Kosmetatos and the name died out.

Both are returned expats of a sort - Marianna's father left the country after a coup and had his daughters educated in the UK, whilst Petros' family went to Australia.

Kefalonia, one of the largest and less overtly touristy Greek islands has a European, rather than Turkish, heritage that included civilised society, gilded furniture and balls but 7,000 years of history were destroyed by a huge earthquake in 1953.

Of more interest to would-be winemakers is that the island is cooled by winds from the north and is composed almost entirely of pure white limestone which reaches over 1,600m at its highest point. 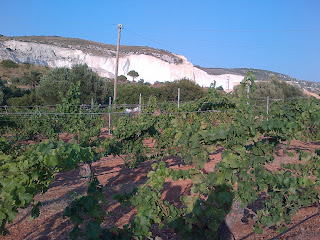 The island has three PDOs - for Robola, sweet Mavrodaphne and sweet Muscat.

The Gentilini winery is just 30 years old and dates from when father Kosmetatos returned from a self-imposed exile - a man with artistic tendencies, he designed and built a house on a cliff edge with 180-degree panoramic views.

Behind it stands the vineyard, winery and tasting area. Early plantings of Chardonnay were not a great success and the focus of the vineyard is, increasingly, indigenous varieties including Mavrodaphne (made dry) and Tsaoussi.

The winery - all organic and gravity-fed (easily done on the steep hillsides) - also buys in grapes from growers both on the island and from the mainland, around 40 tons annually to make a range of red, white and rose wines of increasing quality and complexity.

Each year a number of experimental wines are made - last year was a late-harvest dessert wines, this year, with a new winemaker arrived most recently from the UK's sparkling wine industry, they are trying out a traditional-method fizz based on early-picked grapes (which, as seen below, was still fermenting when we visited). 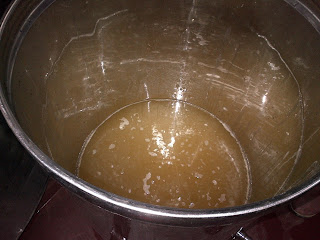 I first tried Gentilini's Classic Robola at a presentation of Greek wines by Konstantinos Lazarakis MW for the Circle of Wine Writers earlier this year. Staying at the Gentilini Retreat - a 20ha olive grove with rooms and a pool, run by sister Eleni Kosmetatos - I was invited down to the winery for a tasting by Marianna.

With lots of temperature-controlled stainless steel and small oak barrels, quality is high - and this is reflected in the prices which start in double figures for the entry-levels wines and will push, or possibly hit, three figures for magnums of the top Reserve red. 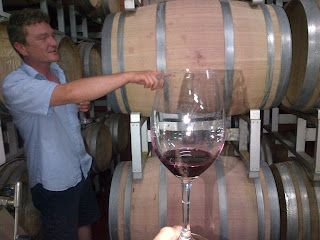 The whites have a minerality and precise purity that reminds me somewhat of Austria much further to the north; the reds, from traditionally-sweet Mavrodaphne and fulsome, bosomy Agiorgitiko have a more crowd-pleasing fruit-forward softness, but with plenty of stuffing, too.

All wines are 2012 in bottle, except where noted, and we accompanied the tasting with some Gentilini olive oil and local graviera cheese, the name apparently taken from Gruyere. 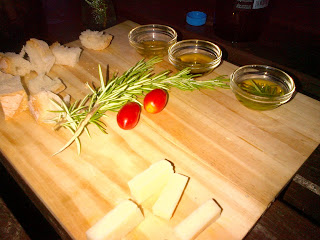 Aspro - Tsaoussi, Muscat and SB blend; low in alcohol and acidity, Tsaoussi is not a great grape for making wine and needs the support of the other grapes here. Nonetheless, the result is crisp, toastiness, white flowers, persistence, aromatic herbs.

Unique Blend Red - Agiorgitiko (plus some Syrah); soft and fruit-forward, bramble with pepperiness

Dessert wine (283 half-bottles made as an experiment, air-dried SB & Muscat) 12% alcohol, peachy nectarine, roasted skins, fresh acidity, savouriness and depth -  more intense than elegant. Not made commercially - which is a pity. Good.

The Robola is imported into the UK by Eclectic Wines of London SW6 3RA (mary@eclecticwines.com).