Crus Bourgeois 2010 At The Cambridge Tasting‏ 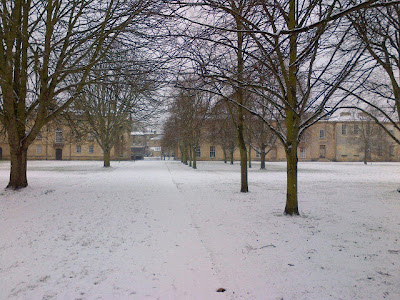 The second part of the Cambridge Tasting at Downing College was six 2010 Crus Bourgeois wines with three 2000s provided by Davy from the college cellars for comparison.

As well as the group of tasters in the room, I had organised for Louise Hill of PR agency Phillips-Hill to be online for a tweet-up as well.

After the discussion prompted by the earlier Swiss reds, there was greater uniformity in the response to these wines that was only in part due to the quality.

Bordeaux is not only a benchmark style but also the basis of the whole En Primeur / wine-as-an-investment business - and, with prices in the £15 - £25 range, the Crus Bourgeois are perhaps the heartland of affordable, age-worthy wines that fill college cellars.

College buyers like Davy are accustomed to tasting through a room full of Crus Bourgeois wines to select just a small handful to buy. The tastings may well be organised by a merchants such as Cambridge Wine Merchants and the wines will be served to members of the University's Wine Tasting Society and Blind Wine Tasting Society.

As a result, the Crus Bourgeois wines we tasted were, for more than half the people in the room, not just familiar, but a fundament of their wine knowledge, a pillar or key reference point.

Historically somewhat independent-minded, I have never approached wine in terms of what I felt someone else said I should like - I have always wanted to make up my own mind. But over time, one inevitably drifts towards the classics - and with good reason.

Bordeaux, however, has always been my first love for red wines - the wine that first got me interested in wine and the one I would still buy above all else.

The 2010s
2010 was a good year in Bordeaux and the consensus here was that there was "lots of fruit, lots of everything" in all these wines - tannins, structure and general "stuffing".

Chateau La Commanderie, Saint Estephe a touch of cork taint on this one, perhaps - nose is funky, the palate feels thin and grippy in the wrong places, astringent on the finish.

The 2000s
2000 was another good year for Bordeaux and a good, well-cellared 2000 Cru Bourgeois is perhaps now just at full maturity.

Patache d'Aux, Medoc looks much younger than its decade-plus in the glass, just some slight paleness around the rim. Smells older though and a slurp reveals it has cork taint.

Chateau Lanessan ageing and starting to tire, this one - fruit has become more rosehip, but acidity still lovely.

Of the 2010s, the style and quality was quite uniform. But if I had to pick one, it is the Gironville for its ripe tannins and lots-of-everything-ness.

It was hardly a fair fight between the 2000s, but the clear winner was the Bernadotte.

Image credit: side pictures courtesy of the Crus Bourgeois website.