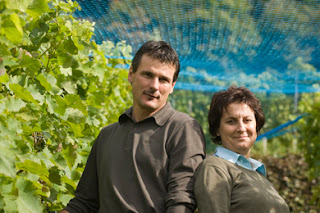 I kicked off The Cambridge Tasting with six wines from Swiss producer Adank.

Based in the village of Fläsch on the border with Liechtenstein and in the foothills of the alps, Patrick had explained how they make international white varieties and mostly Pinot Noir for the reds.

With the snow falling outside and the heating in Downing College turned up to "institutional" levels, we had chilled the whites simply by popping them outside.

The most-planted Swiss white variety is the relatively-obscure Chasselas, but we had the international Sauvignon and a Chardonnay to try.

Both were, I thought, well-made and very interesting - with good fruit expression, textural interest and sense of individuality, blending modern and traditional.

Both were also liked by fellow Oddbins blogger, Paola Tich who is not generally a fan of generic Sauvignon and clunky Chardies.

The Pinots were not well-liked by two of the more experienced tasters in the room who felt they lacked fruit and "stuffing".

I found myself in the slightly odd position of speaking up for them (I somehow have not yet learnt to love Pinot); I approached them in terms of their acidity first, which I found to be quite good, as was the persistence. 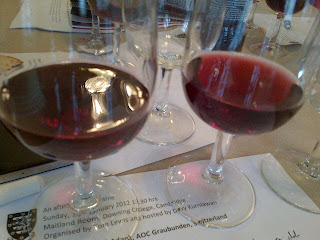 I wondered whether the dislike stemmed from the fact that they fell outside of a standard PN pigeon-hole and, whilst not completely faultless, were perhaps as much "different" as "bad".

I spoke afterwards with late-arriver Matt Boucher who is a fan of German wines and he rather liked them, but noted that there was something of substance lacking on the mid-palate.

Some of the naysayers also suggested that the style was perhaps deliberately old school and rustic.

At the end of the tasting, I collected up all the leftovers and took them home. The Adank reds I thought improved with some air and showed more fruit - even after several days - so perhaps they did not show their best straight out of the bottle.

The final red, a Syrah, was light and pale - rather like a slightly darker version of the Pinots. I was unsure what to make of it at the tasting, but later I decided I rather liked its gentle, elegant softness.

2010 Fläscher Pinot Noir Auslese cherry and red berry fruit, a touch stalky with thinness on the mid-palate, but long acidity and reasonable persistence on the finish. A touch of spice develops but rather lacks complexity.

There were complaints at the time of this one being "hot, alcoholic and harsh" and "lacking fruit"; there is perhaps an element truth in all of those observations, but I don't feel that, taken alone, they adequately summarise the wine. And I think it improved significantly with aeration.

2008 Fläscher Pinot Noir Barrique the most complex of the PNs here. Again, not liked and described as a bit tired and lacking fruit.

2010 Fläscher Syrah translucent in the glass like the PNs, definitely not Rhône-esque.

Delicate fruits on the nose, some sous bois; spice and dark berry on the palate. Soft, gentle Pinot-esque texture, long on the palate with good acidity. Again, a touch of stalky astringency, especially on the finish, but otherwise quite elegant in style.

This was considered "fragrant but lacking complexity" which, again, I feel is not wholly representative.

Email ThisBlogThis!Share to TwitterShare to FacebookShare to Pinterest
Labels: Switzerland