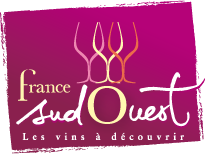 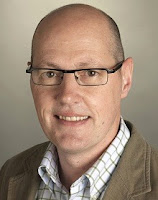 A few months ago, I had heard the Gang's Anthony Rose talking through the region, its grapes and terroirs in depth. This time it was Tom Cannavan's turn to match some of their favourite SW France Wines to traditional Christmas dishes as interpreted by sister restaurant Cellar Gascon's Michelin-starred chef.

Tom started with a brief overview of the region in which they key theme was diversity; situated in the bottom-left quarter of France, it covers around 1/6th of the country's land mass and climatic influences are fourfold: 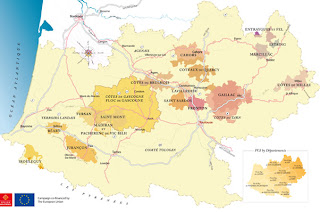 Each broad sub-region has its own set of grapes - some more familiar than others - whose names, Tom explained, are often appropriately descriptive: Fer Servadou has a wild, feral character; Arrufiac is something of a ruffian; Tannat is tannic and Duras has a certain toughness (dur in French)

Key statistics are that roughly 50% of output is PGI (the old VdP), whilst 25% is PDO (formerly AOC) whilst 25% has no geographic indication, meaning it is blended with wines from other regions into Vin de France.

Perhaps surprisingly for such a southerly region, 53% of output is white, 9% rose and just 38% is red - however, one has to bear in mind the cooling Atlantic influence and effect of altitude in the Pyrenees.

For each course, I tried the wines alone initially and then with food.

We started with two wines to match smoked salmon with toast - the toast itself was wafer thin rustic white bread toasted and season with olive oil, whilst the salmon was pink, fat and juicy.

St Mont, Vignoble de Gascogne 2011 (Marks & Spencer, £7.99) a blend of local grapes this was herbaceous, aromatic and zesty on the nose, with ripe citrus fruit and leesiness on the palate. Modern and cool in style, it worked very well as an aperitif but felt overpowered a little by the food.

Le Passe Authentique, Plaimon Producteurs 2010 (Waitrose, £8.99) a similar blend, with an extra year's ageing, older vines and battonage, this had less of the aromatic expression, but more depth and a sense of structural underpinning which proved a better match with the richness of the food.

Next was a Basque pate on Toast which had a meaty rusticity with some spice and sweet peppers; on this occasion, the toast was sweet, buttery brioche.

This was matched to two Cotes de Gascogne wines, where the traditionally workhorse grapes of Colombard and Ugni Blanc dominate.

Domaine de Tariquet, Dernieres Grives 2010 (The Wine Society, £14.99) a varietal Petit Manseng with a rich nose of botrytis and marmalade, this is a lovely wine - sweetness cut through with fresh acidity and very elegant. This matched very well with the sweetness of the brioche.

Domaine de Pellehaut, Ampelomeryx 2010 (independents, £10.49) an equal blend of Ch, SB and the two Mansengs, this is oak fermented and aged for 9m in oak, 30% new. A complex, toasty, zesty nose, slightly sulphurous, good acidity, structure and persistence. The spiciness of the wine and persistence match the pate, the acidity cuts through, but it does not stand up well to the sweet brioche.

For a ballotine of Turkey and Chestnut, we moved to Fronton where the thin-skinned and mildew-prone Negrette dominates - most of the wine here is sold in the bars of nearby Toulouse.

Chateau Plaisance 2011 (Caves de Pyrene and others, £10.49) a rosé from 80% Negrette, 15% Gamay and 5% Syrah; organic and using wild yeasts, this is almost a natural wine. Salmon pink, with a slightly toasty nose; earthy, bone dry and savoury on the palate, great structure and depth, needs food and matches the succulent turkey meat perfectly, but not so well the sweetness of the chestnut.

Ch Montauriol, Mons Aureolus, Vignobles N Gelis 2009 (York Wines, POA) a blend of 50% Negrette, 25% Syrah and 25% Cab, this spends 12m in Allier oak; on the nose there are expressive aromas of sweet vanilla red forest fruit, with more cherry fruit and vanilla on the nose. A little underwhelming on its own, it works really well with the sweetness of the chestnuts and is transformed into a wonderful match.

The main course of roast beef was accompanied by a bread sauce and a red sauce of cranberries, port and kumquats.

These were matched with two hefty reds from Madiran, just south of Bordeaux where reds are mainly Tannat, whose name is taken to refer to its tannic nature which needs either years to soften or a fish tank-like process of micro-oxygenation.

Ch Arricau-Bordes, Plaimont Terroirs et Chateau 2009 (POA) even served decanted, this feels quite youthful. I am not convinced by the effects of micro-oxygenation - the tannins feels artificially softened and not in keeping with the rest of the wine. A bit like botox. A rustic and earthy nose with vanilla spice, sous bois and cigar box. Good acidity, sweet vanilla and bramble fruit with a grippy finish. It works well with the beef and red sauce, but not the bread sauce.

Ch Bouscasse, Veilles Vignes, Vignobles Brumont 2006 (Fortnum & Mason, POA) aged naturally in oak for 16m, this is 100% Tannat. There are the first hints of brick red in the glass, the nose is intense, elegant and herbaceous with muskiness and dark berry fruit. The palate is spicy, herbaceous and complex with good fruit, concentration and intensity. Lovely secondary aromas of woodsiness with grippy, slightly grainy tannins. A very impressive wine and works well with all the food.

It would not be Christmas without a Christmas pudding - and it is a brave choice to try and match to a table wine, rather than an aged brandy. It is even braver to attempt the match to a dry red. The pudding itself was delicious and light, and we all helped ourselves generously to the accompanying cream.

Domaine d'Escausses, Cuvee des Drilles 2011 (Caves de Pyrene, £9.99) with spicy, fruity aromas, fresh acidity and lots of dark elderberry fruit, this matched the character of the pudding and cut through, but lacked the sweetness to be a proper match.

Domaine Rotier, Renaissance 2008 (Vine Trail, £13.25) a varietal Loin de L'Oeil, this was a delicious, amber coloured beeswax and marmalade sticky, with some weightiness from oak-ageing. It had the sweetness and acidity to stand up to the pudding, but was not quite weighty or characterful enough.

I couldn't help wondering whether a sneaky splash of the dry red in the sweet white might do the trick - the rich, dark fruit and spiciness of one with the sweetness of the other.

That actually proved to be the case for almost all the food and wine pairings: between them, the two wines had the expression and body to match, but individually they struggled with the complexity of the dishes - often, the match of sweetness and bitterness with the weightiness of the food.

It is hard to surmise underlying reasons for these near-miss matches - the complexity of the food, limitations of the wines - but it is worth noting that the best match came from the most complex wine, the Bouscasse with the roast beef.

All the wines were good, I thought - even if I was again not convinced of the benefits of micro-oxygenation.

My top wines were: