Last night, I was at Bafta for a Villa Maria tutored tasting and dinner with founder Sir George Fistonich and winemaker Alastair Maling MW.

I don't know exactly when New Zealand went from being a small backwater island off the coast of a much-larger backwater island to a place of high-tech wineries, stunning scenery and ski resorts.

In my head, the tipping point was the Lord of The Rings trilogy, but the earlier film The Piano and waves of hardworking kiwis in the hospitality and accountancy sectors must have also been a factor in the general build-up.

Sir George Fistonich's family arrived in New Zealand from the beautiful Croatian island of Hvar in the mid 20th century as way of escaping the advance of communism, and since modern wine-making in New Zealand can barely be measured in decades, his entry into wine 50 years ago is positively ante-diluvian.

The tasting started with four Pinots. I have had my doubts about Villa Maria Pinot Noir before - not that there's anything wrong with them. Rather the opposite; they are well-made, reliable and distinctly inexpensive, compared to Burgundian Pinot.

Put an entry-level Villa Maria Pinot in front of an enthusiastic novice keen to see what the fuss is about and you can say "There - that's what a Pinot should be". Ripe cherry fruit, some mushroominess, well made and balanced, it ticks every box.

And as you move up the scale, they get correspondingly better, more concentrated and complex.

An automotive analogy is a base-model Mercedes - you get great build-quality and reliability, but ultimately it's a lump of stodgy, underpowered German metal. 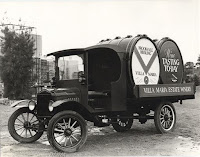 The Romantic in me sees Pinot as something more free-spirited, an Italian Prancing Horse, untamed and unreliable - not a three-pointed star with lots of airbags.

"We can't do a non-aromatic wine in New Zealand" said Alastair with a grin and suggested this could prove an alternative to kiwi Sauvignon. A Grüner is due to follow as well.

It proved popular with fellow tasters, but for me it had all the usual family hallmarks and not enough that was stylistically new or interesting.

Villa Maria Organic Cellar Selection 2012 by contrast, I thought this SB did offer something different; a tank sample, it has a precise, zesty, pungent nose, the smell of freshly-cut garden-picked string beans which Alastair described as a touch of "wildness". It feels lively, almost spritzy, and there is a fullness on the palate, leading to creaminess, and aromas of blackcurrant leaf

Villa Maria Reserve Syrah 2009 Alastair explained that "Syrah" is something of a hard sell as consumers know Shiraz and know the Rhône, but don't know Syrah. And this wine was not quite either, with a European emphasis on texture and palate but a New World ripeness.

On the nose, there are mixed peppercorns, liquorice and dark fruit; the palate shows violets and plum fruit, sweet vanilla spice. The texture is velvety with soft tannins.

Again, this one was popular with fellow tasters, but for me was a little tick-box and worthy, rather lacking in the touch of Gallic insouciance I look for.

The best of the Pinots, I thought, was the single-vineyard Seddon. And I believe that this is no concidence, given Pinot's origins in the minutely-detailed vineyards of Burgundy.

Is Pinot a grape so expressive of its terroir that it should never be blended, for in doing so it will lose something of its wilful personality ? I can't help wondering.

To return to my earlier automotive metaphor, maybe the solution for New Zealand Pinot is not to have to choose between being either a Mercedes or a Ferrari. Rather, to combine the best of both as a Bugatti, the Italian supercar made by a division of the behemoth VW Group -  a sensible Tutonic heart combined with a Latin soul. Oh, and very expensive, too.

As to the whites, I am generally very cynical about organic wines, and yet each time I try them, I find a quality that is recognisable yet eludes description - a fullness and sophistication. For that elusive rounded assuredness, for me the best white was the Organic Cellar Selection SB - whether it reaches our shores and, if so, how similar it is to the tank sample remains to be seen.