When David Lowe, aka @BigPinots, called me the other week with an offer to get involved in a wine-blogging project, I was pretty much in from the start.

The idea was for six bloggers to choose two wines each from the newly-revived Oddbins' range to be promoted it jointly - we via our blogs and Oddbins on their websites.

The money element would be minimal, if anything initially; a minimum-wage internship to learn the ropes and prove we could do it.

However, it struck me as a genius idea for a number of reasons: different from the usual wine-of-the-week recommendations of the Big Established Names of wine writing, it was an opportunity for us as a group of bloggers to connect with our audience in a novel, possibly unique way.

Instead of just trying a pre-selected wine - either at a tasting or a sample - and then writing it up, this would be a chance to pick a couple of wines I really like and say "This is something that I really think is worth drinking".

On a personal level, it would also be a great opportunity to work with a team of fellow bloggers who all have different palates and outlooks, a chance to put forward my thoughts on what is a good wine and have it critiqued by fellow enthusiasts.

And as it turned out, we all brought something different to the mix - David and Tara came up with the idea and managed the relationship with Oddbins, Andrew provided the photographic skills whilst Paola and Belinda have the PR expertise. With my company director background, I dealt with a lot of the procedural and administrative issues.

We met to choose the wines one afternoon at an Oddbins branch in south London, sampling and dividing the wines into yesses, noes and maybes.

Our remit was fairly broad - a mixed case of good wines that would not cost more than £100 aimed at neither the complete novice nor the wine snob.

Paola had sent round a copy of the Oddbins list in advance and from it I had marked down suitably-priced wines I thought might be interesting based on either regions, producers or grapes that liked and knew well enough to be able to tell straight away if they were good examples. 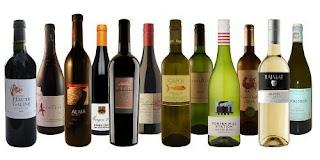 Top of my list for whites was an Austrian Gruener Veltliner, of white I am a huge fan. Finding a good sub-£10 Gruener is no mean feat - £10 is pretty much entry level here - and a quick taste was enough to let me know I'd found my white; linear and mineral, it is a poised, elegant, food-friendly wine with great structure and a balanced finish.

However, choosing the red proved more difficult. I initially went for a high-altitude Spanish red from a producer whose wines I have tried before, but when we ended up with three inland Spanish reds and no consensus on which was the best, it was time for a re-think.

One of the ground rules we laid out was that all six bloggers should be happy with all the wines, so it would not be just a case of saying "Here's my two", but of getting agreement on all twelve wines with each blogger selecting their two favourites.

Some of the wines provoked more debate than others - my Gruener had both supporters and doubters, but was eventually carried by the level of support it commanded. Some wines were in and out more times than the hokey-cokey as detractors put them aside whilst supporters put them back.

With about 10 wines chosen and still no red in sight for me, we pulled a few more off the shelves - one proved good enough on quality to be included, but not on value; another was agreed to be bit too "international" in style - an oaky, ripe fruit-forward red that was good enough but could have been from anywhere in the New World.

At this point, I went for a wander round the shop looking for inspiration and my gaze chanced upon a medal-winning Rhone at just under a tenner. Just possibly, I thought, I might have found my red.

We opened it up, gave a swirl and out came aromas of dark berry fruit and a touch of garrigue herbs. On the palate it had an inky, mouthfilling texture and a nicely grippy finish; perfect with herby roast meats such as lamb with rosemary, or spicy salamis.

It proved to be one of the least controversial wines, a great discovery for me and at least as good as the red I had initially put forward.

With all 12 wines finally chosen, we marked the end of the first stage of The Oddbins Bloggers' Case with a few promotional photos and an agreement to deal with all the various admin bits and bobs in the coming weeks with the aim of launching in early July.

Caricatures were commissioned and approved, we finalised terms with Oddbins, our tasting notes were drafted and subjected to group scrutiny - I was quizzed about my use of the word poised for the Gruener (which I insisted on keeping) and reference to garrigue herbs for the Rhone (which I eventually changed to wild mediterranean herbs as a sop).

A week or two later, we all went to the Oddbins Wine Fair in Bloomsbury where we saw the Oddbins Bloggers' Case being promoted for the first time alongside their The Palate competition. I also bumped into various wine friends: Michael Thurner from Austria's Fine Brands, De Martino from Chile and fellow CWW member Quentin Sadler, as well as meeting Stevens Garnier who are the importers of L'Arnesque.

And finally, on Monday this week, we launched; the selling price of the case is £98 with free delivery, around a 15% discount as we agreed with Oddbins to reduce the price rather than take anything more for ourselves.

So all that remains is for people to buy it and let us know what they think - I say this not for the pocket-money commission levels, but because this is an opportunity for us to engage in a conversation about these wines and I would love to know what people think about them.

We, the six bloggers, have put our names and our reputations behind these wines and we hope they prove popular. But more than that, we want to know what you think of them and whether you share our enthusiasm for them.

We debated, discussed and haggled to find wines that we not only liked ourselves, but which stood up to the scrutiny of the whole group and which made sense as a collection.

I hope you like them. But more than that, I hope you'll let us all know what you think of them.

The Oddbins Bloggers' Case can be found here - http://www.oddbins.com/wine/Wine_Bloggers_Case.html