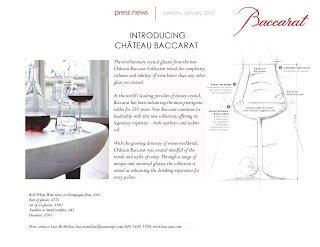 Some time ago, I was loaned a pair of Baccarat glasses to review; I was impressed by their stylish design and general build quality, but after an hour or so of comparative sniffing and sipping, less convinced that they were superior to any other glasses one might use for wine tasting.

I had bench-marked them against an ISO tasting glass, a Riedel Shiraz and Bormioli Rocco using a bottle of excellent Rousseau de Sipian Medoc 2005 from Cambridge Wine Merchants.

A few weeks later, the Baccarat range was launched in the UK with an event that I was unable to attend; but I read the twitter stream and exchanged a few tweets with JancisRobinson.com writer and aspiring MW, Richard Hemming, as well as @winerackd.

We came to the conclusion that the Baccarat glasses show best on the nose with wines straight out of the bottle, but with no difference on the palate - this makes sense as the Baccarat glasses are broad, flat and shallow - rather like a decanter. With a newly-opened wine, this will aid the aeration process significantly compared to a more tulip-shaped glass.

Richard noted that after about an hour, there was little or no difference between the Baccarat and the other glasses.

For my review of the Baccarat glasses, I first decanted the wine and generally allowed it a decent amount of air before sniffing. I also used quite small measures meaning a greater surface-area-to-volume ratio in the glass generally.

All this rather reconfirms my feeling that the superior performance that the Baccarats offer is to be found more in the dining room that at a tasting event - I re-ran the test using a pair of more traditional, non-bulbous glasses and without the extensive swirling and sniffing for comparison and found the Baccarats to be much better than a pair of U-shaped Royal Doultons.

Richard returns to his theme of Baccarat glasses in this piece for the FT on Buying and Investing in Wine Glasses - as someone who has broken more wine glasses than I care to remember (always the good ones, sadly), I particularly appreciate his comment that price is a consideration not so much of whether you can afford to buy them, but of whether you can afford to replace them if they break.

For the full review of the Baccarat glasses, see here: http://cambridgewineblogger.blogspot.co.uk/2012/02/chateau-baccarat-oenology-range-glasses.html