Limoncello at Cambridge Food and Wine Society (with La Dante) 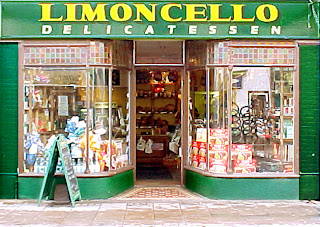 After I arranged a tasting of Italian wines for La Dante in Cambridge last year, Giulia Portuese-Williams, who runs the centre, suggested we do a joint event together with the Cambridge Food and Wine Society.

When, shortly afterwards, I made contact with Steve Turvill who runs Limoncello on Mill Road, everything fell into place and we agreed to promote the event together using our various Twitter accounts and Facebook groups.

La Dante in Cambridge is part of the international la Società Dante Alighieri, founded in 1889 with 440 offices worldwide - it is a national cultural institute rather like the British Council or the Goethe Institute, but unlike these it is not state-funded and so needs to rely on language lessons for its income.

As the old adage goes, I'm sure at least half of our social media efforts were wasted, but I've no idea which half; in any case it proved to be the best attended event the Society has held for a long time.

Numbers aside, it also proved very popular with both Society and La Dante members as well as the new guests who came along, including Caroline Biggs who writes an excellent  blog on Cambridge's hidden past, The Real Cambridge.

After introductions and welcomes, Giulia briefly spoke about La Dante which has recently moved into new offices, describing her experience of British bureaucracy as what she hoped to leave behind when she left her native Italy.

She also made an open invitation for everyone to drop into La Dante to see the new offices and have a cup of real Italian coffee, but I suspect that may not apply to the powers that be that oversee property moves in Cambridge.

We started the event itself with a Prosecco, Villa Sandi Millesimato 2011 Valdobbiandene - with ripe pear fruit, hints of yeasty brioche and good depth on the palate, it had good, food-friendly acidity and a long finish.

The name was familiar and reviewing this blog, I see that I tried a sparkler from Sandi some time ago and checking my notes, was impressed with it then as well.

Steve then invited us to try two different sets of olives - the first cured, the second marinaded; the accompaniment to this was a Sicilian Grecanico, Vinali Roccamora Sicilia. Also known as Garganega in Soave and with just 12% alcohol, it was crisp and fresh. A sandy yellow in the glass, it had an expressive nose, with herbaceous, floral hints, white pepper spice and toasty yeastiness; there is lemony citrus on the palate, and a long, savoury finish

There followed a series of "taste tests", starting with two olive oils; both had been poured into unmarked containers and we were invited to decide which we preferred - one being significantly more expensive than the other.

For me, olive oil should be strong, fruity and peppery and I was sorry to learn that my preferred, more-strongly flavoured oil proved to be the more expensive one.

This set up something of a pattern as we then repeated this with two types of cured ham - both were very good, but I found myself slightly preferring the (more expensive) San Daniele compared to the Prosciutto.

Next were two lots of balsamic vinegar to try - the first was thick, gloopy and sweet, whilst the second was incredibly complex and quite wonderful, so there were no surprises when #1 proved to be a basic "balsamic glaze" whilst the second was a 25yo, extremely expensive balsamico tradizionale.

We accompanied this part of the tasting with a Sangiovese; with cherry fruit and vanilla spice on the nose, there was juicy sour cherry on the palate which opens up and becomes more rounded with air.

Steve's chef Paul then made some pesto freshly using a blender which we compared to some from the shop; I found myself preferring the shop-made pesto for its stronger flavour and higher cheese content, but a number of people on the table who are regular visitors to Italy found the more herbaceous, freshly-made pesto to be typical of what they had experienced in Italy.

This led on to a discussion with Giulia about how best to keep basil in Cambridge - whilst I can grow rosemary, tarragon, parsley and chives in our south-facing garden, I've never been successful with basil.

According to Giulia, basil needs hot, damp conditions to thrive - essentially a Mediterranean climate, which is not easily reproduced in Cambridge - so I am unlikely to be making pesto from home-grown basil any time soon.

We then moved on to a comparison of three types of cheese - a Pecorino Fresco which had a soft texture, a firmer and stronger aged Pecorino with saffron and black pepper and some shaved parmesan, accompanied by bresaola, marinaded artichokes and various breads.

With this, Steve served an Elvio Cogno Vigna Elena 2005 Barolo; still relatively youthful at 6 years old, it was a pale, brick red in the glass with red and black cherry, tobacco leaf and pepperiness on the nose with cherry fruit, minty eucalyptus on the palate and a grippy finish.

The dessert section of the tasting featured home-made pannetone - better than any shop-bought one I have ever had - and cantuccini biscuits with a Moscato Sicilia; a golden colour, it had a an oxidative nose with a marmaladey palate cut through with fresh acidity.

The final digestivo was, appropriately enough a limoncello - a sweet lemon liqueur; on many occasions when eating out in Italy, I have found a sorbetto al limone con Prosecco a perfect digestivo at the end of a long, multi-course meal and the limoncello served the same purpose here. 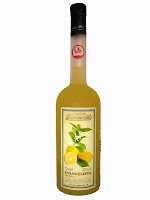 With a zesty, pithy nose, it is initially intensely sweet and warming on the palate with a mouthfilling zesty, pithy bitterness that develops over time and a long, citrusy, aromatic finish.

It was a great event and very well received by Society members, those from La Dante and the large number of guests who came along - I put the success down to the sheer quality of the food and wine that Steve brought along for us to try, as well as to the way he ran the event; he is an easy-going, natural presenter and his love of and enthusiasm for all things Italian is very apparent - even if, as he admits, he would not actually want to live there.

For the final part of his talk, Steve explained how he had first got involved with Limoncello; in its previous guise, it had been his favourite deli and when it went bust, he bought the business and ran it as a sideline to his day-job. After a few years, the business was successful enough for him to do it full time and he is now looking to expand with further branches in the Cambridge area.

It should come as no surprise that there were a number of expressions of interest from the audience at this point.