Last night I went to an alumni lecture organised by my university's business school, presented by former BBC and now CNN business presenter Richard Quest who graduated from Leeds with a law degree in the early 80s.

At the drinks reception, I chatted with Phil Steele, Head of Alumni Relations, who explained that the Business School is putting more effort into getting (paid) internships for undergraduates.

Whether it's the economic climate or the impact of tuition fees, going to university seems to have become more of a conscious decision these days, rather than just the default post-A level option, with undergraduates a lot more focused on their career prospects compared to when I did a languages degree because I liked reading foreign books.

Unpaid internships have become something of a hot topic in the marketing services industry - on the plus side, they allow motivated but otherwise inexperienced graduates to rise above their peers by gaining useful experience that gets them into work and increases their chances of finding paid employment on the basis that it's easier to find a job when you have a job.

Moreover, in a difficult market, smaller companies often simply cannot afford to pay interns, so an unpaid internship, whilst not as good as the ideal of a paid one, is at least better than no internship at all.

On the other side, many commentators, with a whiff of class envy or Champagne Socialism, talk of unpaid internships as the scourge of the industry, its dirty little secret, professing moral outrage at the unfairness of middle-class graduates funded by the Bank of Mum and Dad having their labour exploited for zero financial return.

As an argument, it's very similar to the Page-3-Girls-Are-Exploited line, and although involving money, class and young people, it does not feature scantily-clad nubiles, so therefore has not caught the public's attention in quite the same way and, for now, remains a storm in a marketing services wine glass.

For his talk, Richard Quest addressed himself to the issue raised by our Monarch in 2009; of the financial crisis that was then, and still is, unfolding, Her Majesty asked "Why did nobody see it coming ?" 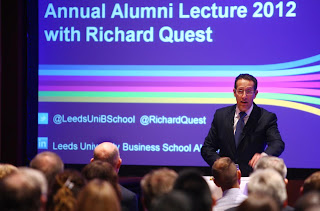 Hindsight is a wonderful thing, so Quest started by recalling his experiences of the last few recessions, starting with Black Monday in 1987; as a junior staffer at the time, as the US stock market began to plummet, his first instinct was to rush around trying to make sense of the story until a more-experienced editor said "Calm down, this is going to go on for a long time", the point being, then as now, financial crises do not pass quickly and always have long-lasting effects.

Next came the bursting of the dot com bubble in the early noughties; at the time, due to this new thing called The Internet, companies with no profits and vast cash outflows were achieving spectacular valuations and the received wisdom was that we were seeing the emergence of a new business paradigm.

Though sceptical himself at the time, Quest also invested in a number of dot com stocks - of those that are still in existence ten years later, the value has more than halved; as Quest wryly observed, if I could pick shares to make a profit, do you think I would still be doing this job ?

Moving on to the current financial crisis, he gave three reasons why it was not spotted by financial journalists.

First, he argued, television news has an in-built bias against financial reportings or anything with numbers in it, much preferring to report on political and human-interest issues.

Secondly, he likened forecasting a financial crisis about to happen as akin to watching thousands of pots bubbling away on a stove and spotting which one is going to boil over.

Finally, he referred to the market's herd mentality - no-one wants to hear that the party is about to end, especially if they are trying to get an invitation to it.

A natural presenter with great charisma who clearly loves being in front of an audience, Quest is very persuasive, but I am not wholly convinced by his arguments; it seems as though everyone else is to blame but the financial journalists - the channels for not scheduling financial programmes, the public for not watching them and company CEOs for over-egging their prospects. And besides, the market is an untameable beast so the whole thing's just too complicated to work out anyway, right ?

If that's really so, then it begs the question, what's the point of financial journalism, unloved and incapable as it is ?

At the beginning of the New Millennium, I remember reading regularly in the FT about the growing problems at Enron for weeks before BBC news reported its "shock" collapse.

Later, in 2007 a colleague who worked in public sector PR used to remark that the then government throwing money at advertising campaigns was great for business in the short term, but fiscally unsustainable in the longer run and was bound to lead to problems.

So, isn't it the job of financial journalists to get the inside track and then join the dots - to hazard at least a guess at whether we are looking at a few isolated anomalies or starting to see a pattern, whilst observing the age-old rule on interest rate forecasting that you can give them a number, or give them a date, but don't give both.

For his final section, he made a point of not hedging his bets and insisted that we are seeing the start of a social media bubble, citing Facebook's proposed $1bn acquisition of Instagram - a company with employees numbering in the tens and which a show of hands in the room showed about 3 people using.

Taking questions at the end, he explained that after qualifying as a lawyer, he could have happily pursued a legal career, but decided he wanted to try journalism and felt he would have regretted it had he not at least given it a go.

He refused to be drawn on who would win the upcoming mayoral election in London, was impressed by Rupert Murdoch's performance in front of the Leveson inquiry, insisted that the Euro would not collapse, but equally doubted that it would continue in its present form, noting that the Eurozone countries had not solved their problems but merely papered over the cracks.

On social media, he declared it "a bloody pain in the arse" for journalists, telling a story of how, bored in an airport lounge late one night, he had started tweeting about an airline's poor service and landed a few hours later to find his tweet on the front pages of a newspaper and himself invited to see his boss to be hauled over the coals, ending with the crack "I now practise safe tweeting !"

As this is (mainly) a wine blog and I have not written about wine for a while, it's worth noting that the wine served at the reception, Cuvée Alexandre, was crisp and poised with nectarine, melon and stone fruit, lemony linear acidity and hints of something slightly oxidative, almost sherry-esque on the palate and finish.

Chatting to my neighbour at the end, we found that we had both been in Moscow in the fateful summer of 1991 when Gorbachev was placed under house arrest in his summer dacha in Sochi and tanks fired on the White House, that we had started our careers in manufacturing industries but then moved into client service, have both worked in personal finance (she more successfully than I) and have an interest in wine. 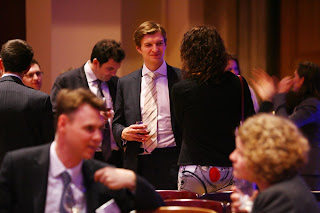