A Wine Tasting at Work With Cambridge Wine Merchants 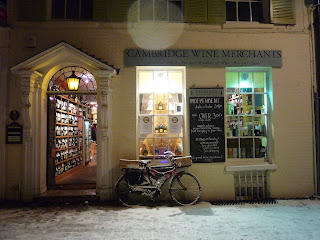 Earlier this week, I held a wine tasting for colleagues at work.
I have learnt from previous experience not to challenge people too much initially or take them too far beyond their comfort zone, so I generally opted for sub-£10, well-made crowd-pleasers that would show well straight out of the bottle - with the odd curve-ball thrown in for fun, too.

I sourced the wines from Cambridge Wine Merchants from wines I have tried previously and which I confidently expected to be appreciated by a general audience, presenting each one blind initially and inviting people to hazard a guess at grape variety, country and price. 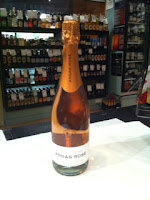 We started with an appropriately Valentine-esque pink sparkler that I reviewed in my February Wine of The Month column, an Angas Rose Brut BV which once again impressed with its good red-berry fruit, rounded acidity and mouthfilling leesiness from fermentation in bottle - and all for under a tenner. 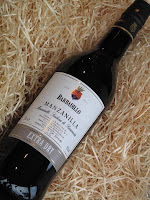 Next up was one of my wild cards - a Barbadillo Manzanilla; sherry is one of my favorite dry white wines and the growth of sherry bars in London suggests the much-heralded revival might even be underway. Crisp, elegant and balanced with a salty, tertiary pungency from the flor, this was immediately recognised by many and even positively received by a few.

The simple food that I had arranged for the tasting - salami, cheese, bread and olive oil - was a perfect match for this wine. 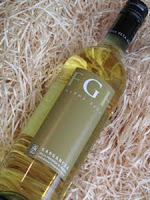 The last white was a versatile Alpha Zeta Garganega - almost no-one picked the country, let alone the grape variety but it seemed to be quietly appreciated over time.

From previous experience, I know that this particular wine can be relatively neutral straight out of the bottle and its tropical, flinty, spicy aromas and honeyed texture can take a while to develop with air. All of which perhaps explains why the appreciation was more murmured than enthusiastic.

Food matches for this wine would be pasta with a creamy sauce or roast pork.

By contrast, the first red, one of CWM's best-sellers, was a real crowd-pleaser and proved very popular - the Mont Rocher Old Vines Carignan has a nose of cherries, dark berries and liquorice with a soft, smooth texture and a balanced finish.

With its rounded acidity and berry aromas, it matched very well with the salami. 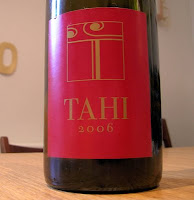 For the next red, I chose something similar but a real step-up in terms of quality and interest - a Tahi 2006 from Domaine Treloar.

I got to meet banker-turned-winemaker Jonathan Hesford at a Game and Wine Dinner organised last year by Cambridge Wine Merchants and held at the St John's Chop House, so it was a real pleasure to revisit one of his wines.

Inky in the glass, it has a complex, gamey nose of woodsy forest floor and truffles; the palate is mouthfilling with a dense, inky texture and some firm grip on the finish and it really is quite superb.

I had opted for the oldest vintage available as the 2009 Tahi I had tried previously needed a lot of aeration to open up fully; however, even with six years' bottle age, it still felt a little closed-up on the palate initially with many people saying they felt it was disappointing - which I take to mean that it needed further aeration.

Nobody guessed this as a Syrah-blend from France and people generally struggled to identify it - I did hear Pinot Noir mentioned and whether this was a reference to its gamey nose or simple a random shout-out I do not know.

Food matches are perhaps hardest with this wine due to its prominent aromas, but hare would suit perfectly.

For the final wine I had originally thought of a sweet sherry, but when stocks proved hard to find (it being shortly after Christmas), I took Mill Road Manager Matt Boucher's advice and plumped for a Ramos Pinto 10-year-old tawny port.

I was impressed at how many people spotted this not only as a port, but specifically as a tawny, and it was perhaps the most enthusiastically received wine of the evening.

A pale brick red in the glass, it showed cherry fruit, a prominent eucalyptus mintiness (or "cough syrup" as people suggested), balanced by a fresh acidity and an exceptionally well-balanced mellowness.

For me, the Domaine Treloar Tahi was a clear winner from the table wines, if not the best wine overall. However, the Ramos Pinto 10yo tawny port was also excellent.

As noted above, the wines were generally sub-£10; however the Tahi and Port were both around £18 - and absolutely worth it.

Jamie Goode's review of the Tahi, from which the image is also taken (scroll down to April 12th) - http://www.wineanorak.com/blog/2008_04_01_archive.html