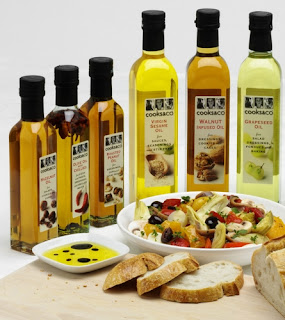 I was recently sent some samples of a new range of Cooks & Co oils for review, so one evening, we poured a little of each into a separate ramekin, made sure we had plenty of good-quality bread on hand and started tasting.

Bread and oil is one of my favourite combinations for a starter - lightly toasted bread rubbed with garlic, with a grinding of sea salt and doused in olive oil, it is pure, simple gastronomic heaven when matched with the right wine; crunchy, chewy, sweet and salty with a  peppery, garlic finish, all washed down with a tangy fino sherry.

We started with the Olive Oil with Chilli; this has around a dozen red chilis floating in the bottle which give a serious kick on the finish - the chili heat is good, not at all bitter and appears gradually, but it rather overpowers everything else.

As a dipping oil, for me this has rather limited appeal but I have subsequently found it very useful when I need to add a bit of a kick to some cooking, such as an amatriciana or Arrabbiata.

This oil, from raw sesame seeds, was good, but I did find myself missing the toastiness.

The walnut-infused oil is made from rapeseed oil with added "walnut extract" - whatever that is - and apparently contains omegas 3 and 6; this was my least favourite oil as it had a distinctly fishy tang.

The hazelnut oil, by contrast, was made from, and tasted pleasantly of, toasted hazelnuts. This was a general favourite and came the closes to having the complexity of a decent olive oil.

The roasted peanut oil was pleasant, whilst the grapeseed oil felt clean and light and is perhaps the most versatile.

Overall, with the exception of the chili oil for its heat and the walnut-infused for its fishiness, these are all oils that I would happily have with bread again as a starter - however, only the hazelnut oil comes close to approaching a good olive oil for complexity and versatility.

Available from Ocado, Budgens, Booths and other specialised retailers; provided for review.

Email ThisBlogThis!Share to TwitterShare to FacebookShare to Pinterest
Labels: food