Anyone dreaming of giving up the rat-race to make wine in the south of France would do well to have a chat with ex-IT Manager and now winemaker Jonathan Hesford of Domaine Treloar, as that is exactly what he has done.

I was invited to a tasting of his wines with dinner at Cambridge's St John's Chop House by Stewart Travers, Senior Wine Buyer for Cambridge Wine Merchants who supply wines to Cambscuisine, owners of both Chop Houses in Cambridge, The Boathouse in Ely and The Cock in Hemingford Grey.

On arrival, over a glass of very lovely rosé Cremant de Limoux from Rives Blanques, I chatted to Oliver Thain, one of Cambscuisine's owners, who explained how, with Stewart's help, they had completely overhauled their wine list and focused it on wines from Languedoc-Roussillon, finding that the region offered a more than sufficient range and better quality / value for money than a list of traditional crowd-pleasers.

This is a very brave step - to take everyone's favourite pub white, Pinot Grigio, off your list and replace it with names that people may well be much less familiar with - and requires a more "hand-sold" approach to the wines, with all the investment in staff education and training that that entails - including trips out the the region.

However, six months in and the results speak for themselves with the wines all selling very well across the list.

The list includes Chateau Viranel, who provided Steve Hovington with the vines for his one-off mid-life crisis Steve's Grenache, so perhaps there is a bit of a theme running here.

Brought up in Barnsley, Jonathan Hesford was working in New York in IT for an investment bank at the time of the September 11th attacks. He was not injured, but was laid off in the subsequent cost-reductions and cut-banks.

It was, for him, a life-changing moment.

Describing the sense of being on a corporate treadmill and saying, "Just one more year's bonus under an incompetent, political boss, and then I'll get out", he was thrust into a situation where he actually had the opportunity to do what others only talked about round the water cooler.

It was, not I imagine, an easy conversation with his wife as it required firstly a move for them plus family to the UK to study at Plumpton College followed by a further move to New Zealand to study at Lincoln University and then two years' work as assistant wine-maker at Neudorf Vineyards before they were finally in a position even to start thinking about buying some land in the south of France.

If a fifteen-year management career in a blue-chip IT department seems an unlikely training ground for being a winemaker, it does provide a number of useful skills, not least of which are project management, people management, budget control and commercial acumen and Jonathan mentioned two particularly sage pieces of advice he had received:

- don't buy too much land, otherwise you'll spend all your time just trying to sell the massive quantities of wine you will produce

- only invest half your capital in land and equipment as you'll need the other half to live on until the cashflows start coming in a couple of years later.

However, despite this project-management approach, Jonathan is no absentee landlord, pruning and tending most of the vines himself (with the help of wife, Rachel Treloar) and rarely bringing in outside help except at harvest time.

I asked him about the change of lifestyle and his aspirations, to which he was initially rather coy before acknowledging that his income is now significantly below that of his corporate career, but that the improvement in lifestyle has been worth it.

He lives, it seems, much as a local rather than as a flying expat, and has been accepted by local farmers in this famously inward-looking and clannish region, meeting up to talk weather and harvests in the cafes and bars of his village.

He explained that the only big money in winemaking is in volume, with big distribution agreements - build an awareness through a flagship brand and trade on the back of it with lesser wines that "average consumers" will buy for the association.

As for the prestige end of the market, there are only two routes to wealth, he says - either buy a top Bordeaux estate and keep charging First Growth prices, or find an obscure and undervalued piece of land, then bring in, Manchester-City-style, a dream-team of consultant oenologists, winemakers and the like, and ramp up prices dramatically.

Unlike dinners I have had at The Punter which sits squarely across the road from the St John's Chop House, the format of the meal here was kept traditional with three courses chosen from a menu plus a cheese board.

For many reasons, I much prefer the idea of tasting menus and tapas-style dishes to selecting a single dish when all look interesting; however, choose I did and I started with a venison terrine with apple and gooseberry chutney.

With people dividing up their various starters for others around the table to try, there was something of a Carry On moment when I got to announce "Ooh faggots - I fancy one of those" and got the straight-faced reply from one of the pink-shirted metrosexuals opposite "Shall I give you some ?".

The piece of faggot actually proved to be very delicious, whilst a slice of cured duck breast was intense and strongly flavoured, but just a touch too salty for my taste.

With a choice of wines, I asked Stewart for a suggestion and he recommended the Terre Promise, a blend of mostly Grenache Gris with some Macabeu (aka Viura) and Carignan Blanc.

Made from 50 year-old vines, there is grapefruit on the nose whilst the palate is full-bodied with layers of complex, toasty, oatmealy oak, rounded acidity and spicy, nutty notes which matched well with all the starters I tried.

Jonathan himself had ordered a glass of his One Block Dry Muscat and offered me some to try; it was weighty, crisp, poised and well-made, but as one who does not particularly like the floral white grapes, I struggled to get past its, well ... Muscatiness.
﻿
Jonathan commented that the wines were served a few degrees colder than he would (around 4 degrees here vs his preferred 8 degrees) and this gave me a chance to ask him about the effects of air vs temperature - as I often find, to great annoyance, full-bodied whites opening up only towards the end of a meal.

His own view is that sulphites will keep young wines stable for around the first 30 minutes in the decanter but that temperature has a much greater effect on suppressing flavours than aeration.

Given that I knowingly tend to overchill whites "just to be safe" - especially if I am decanting - expecting them naturally to warm up a little with time, perhaps I need to re-think this approach.

For my main, I chose hare loin, my new favourite game dish; it was meaty with lots of gamey aromas and came with confit hare, thyme potato cake, pear sauce and some nutty, sauteed Brussels sprouts with toasted almonds. 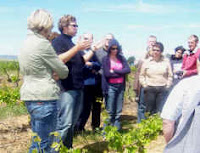 The wine to match this was Jonathan's Motus; made from 95% Mourvèdre, it had a gamey, leathery nose with a complex mix of minty, vanilla spice, garrigue herbs, cherry fruit and minerality with a minty, grippy finish.

A textbook game wine, it matched perfectly with the strong, gamey flavours of the hare.

For desserts, we reverted to ordering one of each then dividing up amongst the table and my choice of a bread and butter pudding had been "deconstructed" and came served as a brick of bready pudding with a jug of custard to pour over; sadly, this was all wrong and the pudding, albeit well made and tasty, ended up too dense with the custard feeling like more of an afterthought than an integral part of the dish.

The most popular pudding on the table was poached pears and cream, perhaps for its lightness after the game - the pears were ripe and well-cooked, but for me it was just some cooked pears with a bit of cream.

However, the final pudding I tried was rather special - Burnt Cream, otherwise known as crème brûlée, one of my favourites; the yellow custard was thick, dense and smooth with a creamy texture and, despite my earlier comments, matched perfectly with a glass of the sweet Muscat de Rivesaltes - perhaps because the weight of the cream stood up to the florality of the wine which had enough sweetness not to be overpowered but also enough freshness to cut through the dessert.

The final course was a cheese plate, a mixture of hard yellow and blue, and for this I ordered a glass of Pomona, a blend of apple juice and Somerset Cider Brandy aged in oak barrels.

A sip earlier had shown it to be unusual and intriguing enough for me to want try a whole glass, but I found the initial appeal started to wane before I finished the glass.

With the evening winding down, the waiting staff brought us a magnum of Jonathan's Tahi to try.

This is one of his top wines and was quite wonderful - a complex, dense nose of dark berries, liquorice, leather, mocha and tarriness gives way to a palate of elderberry fruit, minerality, and minty, herbaceous eucalyptus.

However, more than the complexity of the aromas, the real highlight here is the superbly dense and inky texture of the palate.

A 2009, it is still quite young, especially being a magnum, and with a little left over at the end, I arranged to take the last bit home to see how it would develop with some air.

Resampled after three days, there is a prominent and complex nose of sweet, ripe elderberry fruit, dark berries, liquorice and vanilla spice with garrigue herbs, minty notes and a touch of forest floor.

The palate is inky and dense, yet custardy-smooth, with eucalyptus and fresh, vibrant, cool-mint; the fruit is more dark berries, the acidity juicy whilst the grip is as gentle-yet-firm as a masseuse, the finish long, grippy and minty.

As I have mentioned previously, the standard of dining in Cambridge is not generally that good, due to the high level of transient visitors the city gets, so it is reassuring to find places like the St John's Chop House that do focus on quality rather than just bums-on-seats.

The Chop House also feels part of a wider movement to revive and improve traditional British foods such as game and the snigger-worthy faggots, to make them something to match with great wines and of more than just local interest.

And to get to chat with the restaurant owner, the wine merchant's senior buyer and the winemaker himself is quite something.

The St John's Chop House has a lot going for it - great food, lovely Olde Worlde decor and atmosphere, and now a really interesting and unusual wine list that really suits the style of food on offer; had they just done something bolder and more imaginative with the structure of the menu - something clever, quirky and unexpected - rather than just the standard three courses plus cheese, the dinner would have been truly unforgettable, but really I have no complaints at all.

All the wines were excellent here, but the Tahi was on another level for its structural density and superb tannins; available from Cambridge Wine Merchants at £17.99.

The Game and Wine Evening cost £50 per head, including wines, and I went as a guest of Cambridge Wine Merchants.

For more on the "Outsiders" of Languedoc, see this article by Louise Hurren: http://www.french-news-online.com/lifestyle/2011/november/winemaking-outsiders.html