Hidalgo Sherry Dinner With Cambridge Wine Merchants at The Punter 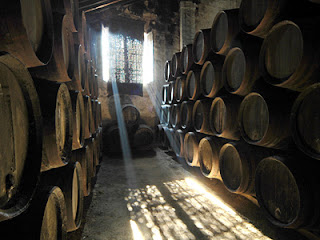 Another week, another visit to Cambridge's Punter pub for some superb wines (this time from sherry house Hidalgo) matched to excellent food by the pub's talented Head Chef, Ben Pope.

I had been invited by Cambridge Wine Merchants director Lyndsey Spellman and found myself joining an assorted group of CWM employees, the "other" Cambridge wine blogger, Davy Kurniawian, a representative from Hidalgo's UK agents, Mentzendorff, and a wine-buyer from one of the colleges who seemed rather more at home with the liveried grandeur and ancient splendour of his estimable college than with the buzzy world of social media and popular culture.

On arrival, I was invited to sit "anywhere except the studded chair"- which I half-expected to tip back Austin Powers-style into a pool of sharks with lasers - but which actually proved to be merely reserved for Javier Hidalgo himself. 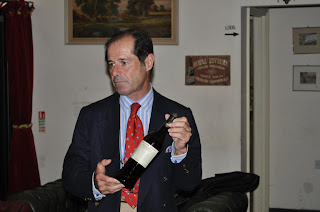 A neat, dapper, handsome man who enjoys coursing hares on horseback and has both the frame and sartorial elegance of a jockey, with quiffed hair, walnut skin and twinkly eyes, Senor Hidalgo is immediately impressive.

The introduction to the evening came from Cambridge Wine Merchants owner Hal Wilson, who described himself as never happier than when he has a glass of chilled manzanilla in his hand, which I'm inclined to believe as he has won several awards for CWM's range of sherries.

With aristocratic gravitas, Sr Hildalgo then introduced himself as the latest in a line of owners of the Hidalgo sherry house stretching back 300 years and made the obligatory reference to sherry being considered these days a drink for aunts and vicars.

From a historical perspective, he pointed out that sherry had previously had few competitors either in Spain or worldwide, which accounted for its success and widespread appeal, but that in the latter half of the 20th Century, the rise of New World wines and the improvement in the quality of Spanish wines had made life harder for sherry producers.

He summed up the current situation as "the best of times, the worst of times"; being best for the consumer who can pick up sherries that are world-class for very little money indeed, and the worst for the producers who are focusing on quality but not seeing that reflected in selling prices.

Of course, there are very few winemakers and winery-owners who do not think their product is undervalued and under-appreciated, but in the case of sherry this is perhaps more true in reality than pretty much anywhere else.

We started with a La Gitana Manzanilla - made in Sanlúcar de Barrameda where the cooling sea breezes allow the flor to grow more thickly, it was fresh, pungent and elegant with a salty tang and refreshingly linear acidity.

Javier explained that the base wine achieves around 12.5% - 14.5% alcohol before fortification to 15% with grape spirit, whilst the average age of the wine in the solera is 4 - 7 years.

The name La Gitana means "Gypsy girl" and comes from the fact that it was historically sold from casks (i.e. not bottled) on docksides to sailors by gypsy girls.

When the wine began to be sold in bottle, the name La Gitana was chosen and a picture of a typical gitana was commissioned for the label.

The wine was matched with olives in a sherry vinegar marinade, roasted almonds, a shot glass of gazpacho and a skewer of roasted peppers, caperberries and anchovies; for me this simple starter was perhaps the highlight of the meal, at least until the dessert wines came round.

The next wine was a Manzanilla Pasada Pastrana - an unusual style of older, more oxidative Manzanilla with an average age of 8 - 12 years that was popular until a couple of generations ago and which remains the wine Javier himself drinks at home.

More golden than the Manzanilla, it showed less on the nose but had more mouthfilling body on the palate.

It proved a difficult comparison with the up-front pungency of the previous Manzanilla which had really started to open up with a bit of warmth and aeration in the glass and initial impressions of the Pasada were of it being much more restrained than the Manzanilla.

For this reason, when I am comparing a series of wines at home, I like to open them all at the same time so that no single wine gets a "head-start" in terms of aeration and perhaps show better merely on the basis of having been opened earlier.

However, with more warmth and aeration, the Pasada also started to open up and show more pronounced, complex oxidative aromas and I found myself liking it very much.


I made the comment to the College Wine Buyer that the Manzanilla had more immediate appeal, whilst the charm of the Pasada was subtler but potentially more long-lived and that therefore they might be classed as "snog" and "marry". In response, his eyes shot through his forehead and he asked me with all the supercilious disdain he could muster "And that's the sort of thing you write on your ... blog, is it ?".

The food match with this was a stew of baby octopus, capers, parsley and tomato and salt cod croquettes with aioli.

The salt cod with aioli I liked very much, but I found the sauce with the octopus a little too intense and salty and rather overpowered the wine.

We then moved on to a Palo Cortado, which is something of an orphan wine, as by nature it is not really supposed to occur.

However, Davy explained to me that despite the inauspicious circumstances of its birth, Palo Cortado is the wine by which a sherry house should be judged as it is always the winemaker's baby.

This one was thirty years old and named Wellington; with a knowing twinkle, Javier dryly explained that during the Napoleonic Wars, his company had supplied both sides ("all soldiers like to drink") and also had a wine named Napoleon.

A mahogany colour in the glass, it had glycerol on the palate, and complex evolved aromas of antique leather, pastry shop, nuts and woody aromatics with an acidity that is still fresh and elegant.

Like a doting father, Sr Hidalgo explained that Palo Cortado needs time and is expensive to produce and I began to understand Davy's earlier comment.

The wine was matched with chorizo cooked with sherry and cauliflower, saffron, pine nut and raisin and whilst the food was good and the logic of the pairing sound - the dark spice of the meat and nuttiness of the accompaniment - it was not quite gastronomic heaven.

We then moved on to an Oloroso Abocado Alameda - with some sweetness, it was nutty and figgy with complex oxidative aromas of leather and polish and was matched with pigeon breast with pomegranate molasses, aubergine with chili and mint and beetroot with yoghurt and pine nuts and rocket.

All three dishes were delicious but the roasted aubergine worked best with its more secondary, roasted flavours and touch of sweetness matching with the oloroso perfectly.

For me, the gaminess of the pigeon might have worked better with the woody aromatics of the older Palo Cortado whilst the sweetness of the beetroot was too primary for the evolved, oxidative flavours of the oloroso.

Matching foods to aged or oxidative wines is a topic I have only recently begun to think about in depth, but for me one general principle is that older wines tend to match with long, slow cooked foods, so that the secondary flavours of both can show though, and perhaps roasting the beetroot after cooking would have brought about a better match.

Sr Hidalgo's comment on the oloroso was that he does not drink sweetened wines at home as they are not suited to somewhere as hot as southern Spain, but that they go much better in cooler northern climates where he enjoys them.

With the final wine a 30yo Triana PX, in one sense the whole of the evening thus far had merely been a warm-up to the main event.

Gloopy and syrupy, the colour and consistency of used engine oil, it had aromas of figs, coffee, treacle, prunes, molasses and raisins, was utterly delicious and matched simply with some excellent home-made vanilla ice cream. 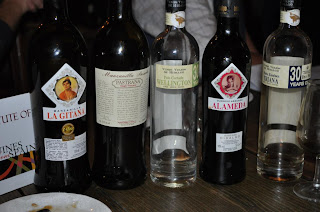 There were plenty of people in the room that evening keen to talk to Sr Hidalgo, hoping for an invitation to visit his bodega or get his autograph on a sherry cook book, but I did manage to ask him about his business, export markets and the potential significance of China which has driven prices of First Growth Bordeaux to such heights in the last few years.

He explained that the UK is a key market for him - La Gitana is stocked by Tesco, for example - whilst Italy buys large amounts of the PX as it produces no equivalent dark, sweet wine.

Specifically on China, he said that if the country gets a taste for sherry, he will have to start a huge planting project to meet demand.

I mentally filed this away as a "diplomatic answer" as there is another approach to dealing with increased demand that the First Growth Chateaux of Bordeaux are very aware of, and decided not to pursue the matter.

For what it's worth, I think that sherry has the potential to do very well in China; its crisp acidity is a much better match for Chinese food than tannic red wines and when well-made, it is elegant and truly world class.

From a marketing perspective it is, like Bordeaux, a European food wine with a heritage and a history and a story to tell, so why not put a red-coloured label on it with number 8s (both symbols of luck to the Chinese) and position it as something to give as a gift to show honour to your intended recipient ?

Who knows, maybe the Chinese will even find they don't need to add cola to make it palatable and it could take off.

All the sherries were excellent, as was the food - even if some matches worked better than others.

Sherry afficionados all have their own favourite style but - for me, on that occasion, with the food matches - the most enjoyable food and wine combination was the simple Manzanilla matched with tapas-style starters.

It was certainly not the most complex wine on show, but its freshness and elegance worked superbly with the food.

For anyone new to sherry and trying to work out what all the fuss is about, it's also a good place to start as, along with fino, manzanilla is the most approachable of the sherry styles, is not expensive and there are plenty of easy food matches such as cured hams, salamis, manchego and bread with oil.

Davy's favourite wine of the evening was the Palo Cortado - see here for his review.

All available from Cambridge Wine Merchants