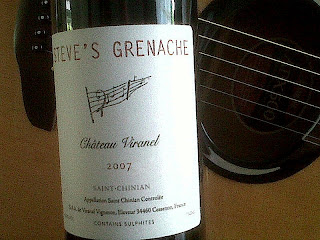 With a book, a band and a wine to his name, Steve Hovington might seem like a walking game of charades.

Or, alternately, a polymath Renaissance Man.

However, a more apt metaphor perhaps is the dabbling gentleman dilettante as, by his own admission, he has historically struggled to find his place in life and make a success of it.

Having narrowly missed out on being a synth-pop star in the early '80s and endured the subsequent slow, painful death of any hope of musical success, he seems to fall into a decade-long, rainbow-chasing, procrastinating funk of not really doing much at all except ending up in retail.

Not exactly rock and roll, then.

But, somehow or other, a company all-expenses-paid wine-tasting trip to Chianti country seems to bring him back in touch with his inner rock-star VIP diva and he discovers a real interest in wine.

A couple of glossed-over job changes later and he ends up working for local independent Cambridge Wine Merchants and also one evening resolving to make his own wine.

With only the vaguely-defined end-goal in sight, he eventually arranges to "borrow" four rows of vines from Nicolas Berggasse of Chateau Viranel in the Languedoc for one year and sets about maintaining the vines, thinning, harvesting and treading the grapes, and making and bottling the wine - all by hand and all under both the tutelage of Nicolas and the sceptical eye of the Berggasse pater familias, Gerard.

Resisting the temptation to name his wine Chateau Mid-life Crisis, he labels it simply Steve's Grenache and then takes a couple more years to write and publish the book of the wine.

I went to the launch party for Steve's Grenache a few months ago at the Cherry Hinton Road branch of Cambridge Wine Merchants, where he was also showing some of the wines of Chateau Viranel whose vines he had borrowed and at the end, he kindly gave me a bottle of his wine and a copy of the book for review.

I also managed to track down B-Movie's back catalogue on Spotify to review all three together. 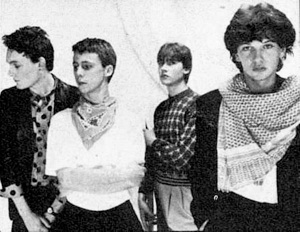 The music, early-80s futurist New Wave synth-pop, feels over-conceived and under-developed, more defined by its genre than genre-defining compared to the way that bands like Bauhaus or label-mates Soft Cell, for example, created a new and unique sound with their first albums.

And on first reading the book, I was also disappointed, most probably due to the weight of my own expectations.

I had expected to find a driven, creative genius with a skewed but insightful view of the world, compelled to express his vision through the power and poetry of his lyrics.

I had also imagined a world of private jets, outrageous riders, groupies and hangers-on and general, booze-fuelled excess.

But this is no Led Zeppelin or Guns 'n' Roses and what I actually got was a headmaster's son from the coal-mining area of the East Midlands with a A-level in design and a penchant for gimmicky outfits who had never quite got over Not Making It Big.

Instead of the visionary Romantic living the rock-star life - even if only in his head - I found someone a bit like me, someone in the real world with a family, a boss and financial considerations to make.

So no rock and roll and not actually that much about wine-making either, as much of the book is taken up with very practical details, such as buying trial vines at a garden centre, emailing old friends with his plans or coach journeys to budget airports to get to southern France.

It's all very middle class and grounded in reality, with key moments from his previous life told in flashback and only hints or snippets of the highs and lows of the rock 'n' roll lifestyle - radio interviews, wild fans and a final disastrous tour.

But reading the book a second time, I found it very different. 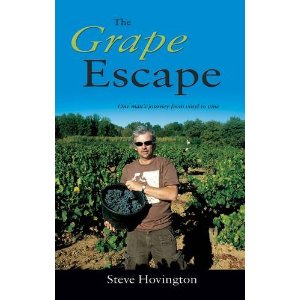 Neither a rock autobiography nor a how-to guide on wine-making, nor indeed a pastoral retreat in rural France, it is actually the story of a man pulling himself together in the middle of his life, accepting his place in family life and society and acknowledging that things hadn't worked out quite as well as he had hoped but getting on with it anyway.

Whilst a global hit record can make you famous the world over and touch the lives of millions (and the same is also broadly true of the world's greatest wines) scaling back your ambitions, accepting your fanciful dreams as just that, setting your sights on something far more modest (but actually more achievable) - this is the very stuff of the male mid-life crisis.

And so it becomes a redemptive tale - just not the one I had originally expected to find.

After borrowing the vines, taking instruction from a talented young winemaker, flying budget airlines and calling in a favour to transport the finished wine in a mini-bus back to the UK, Steve's redemption is not about finding love, friendship or material success.

It's not even really about the wine.

Rather, it is about him finding his place and re-gaining a sense of purpose, direction and ambition, starting something and seeing it through to the end - more Gordon Comstock than Mick Jagger.

At this point, the quality of the wine seems almost irrelevant - its function is as a spur to becoming focused again, to having a goal and making it a reality, to having a dream, yes, but one that can be achieved and is not inevitably destined to be a vague hope.

So, let's start by saying that Grenache from the Languedoc is something of an overblown, blowsy sort of grape generally - fun, but not exactly classy, it usually provides good fruit with aromas of plums, prunes and dark berries.

Purpley-red in the glass, Steve's Grenache shows intense fruit aromas of prunes, liquorice and blueberry and elderberry along with a touch of lavender soap.

On the palate, it is soft and perfumed, almost too perfumey for me, with more dark berry fruit and a baked character.

The texture is almost slippery and there is some softening grip on the finish.

Opinion on this was somewhat divided over dinner - the old-schoolers were somewhat underwhelmed (mainly, I think, at the lack of texture), whilst the modernists appreciated it for the fruit.

I feel similarly ambivalent myself - it is a good wine, superb for a first attempt, but unashamedly fruit-driven in style.

And whilst there's no shame in that, I would like to see a little more in the way of texture.

However, that's probably rather like telling a rookie F1 driver trailing at the lower end of the pack "It would be good if you could go just a bit faster".

In both cases, just the mere act of being there is no mean feat.

And how often is it that you get to drink the wine of someone you know and whose music you can listen to (and by the way, Cliff, AC/DC et al do not count) ?

Steve's Grenache is available in limited (and diminishing) quantities from Steve's Cherry Hinton Road branch of Cambridge Wine Merchants for £12 per bottle.