Until recently, Cambridge had a Golden Triangle in the buzzy, cosmopolitan area of Mill Road (a two-mile strip of independent stores just to the south of the centre). The axes of this triangle were the three real ale pubs - the Kingston Arms, the Live and Let Live and the Cambridge Blue. A recent addition to this holy trinity of places of beer worship is the newly made-over Devonshire Arms. 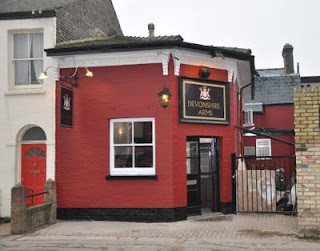 Formerly a rather grubby establishment, the Devonshire Arms is now a smart and modern, but back-to-basics pub selling mainly beers from the Milton brewery based just north of the city. It is run by Individual Pubs who have five pubs in the south and east, all serving Milton beers.

Milton brewery is sited in a small, anonymous shack on a mini business park in Milton just north of Cambridge and makes beer only in casks - sadly, you can't get their stuff in bottles. I visited the brewery with the Cambridge Food and Wine Society as one of their more "off-piste" events a while ago for a talk from one of the brewing staff whilst samples of two of their beers (a light ale and a wheat beer) flowed liberally from two casks.

The enthusiasm of our speaker was infectious as he pointed out that beer was the basis of civilised society, requiring farming techniques and collaboration to grow the barley and hops for making the beer whilst the end result is a much safer drink than untreated water in many places.

We sampled some of the raw ingredients, malted barley and hops to get a sense of the qualities they add to the finished brew. It was a revelation to me to try rubbing hops (essentially flowers) between my fingers releasing the aromatic but bitter oils that are used not only to flavour beer, but also to preserve it - interestingly, hops have no known use other than in beer. Lagers have a much lower hop content and therefore lack the bitterness of an ale, whilst addition of extra hops results in an IPA, India Pale Ale (the extra hops originally being used to preserve the beer on its long sea journey to expats in the Raj).

Back at the Devonshire Arms, we sampled Milton's Tiki and Icarus - both golden coloured with rich malt and aromatic bitterness - as well as Nero, a stout with strong coffee overtones.

Several other beers from the brewery, all with Classical names were available but, as a fellow committee member pointed out a number of Milton's beers tend to follow a "house style" fairly closely with differences often being limited to mainly the level of alcohol. Guest beers included a Ripper at a whopping 8.5% and a Canary (presumably for Norwich City fans, but actually made up the road in Lowestoft).

We had used the pub as a venue for a committee meeting of the Cambridge Food and Wine Society and whilst its attractions as such were obvious, we had not reckoned on it being so busy - or so noisy - so sadly, we will not be going back for another meeting there.

But that does not preclude another visit on a social basis, especially now that they serve food; the menu is like the decor - simple and unfussy with prices to match.