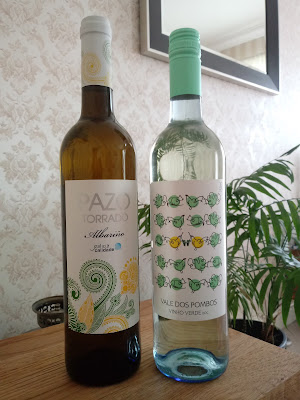 Three refreshing whites from Iberia's Atlantic Coast
Iberia is, geologically speaking, a newcomer to Europe; it crashed into the continent around 100 million years ago creating rock formations known as "flysch". 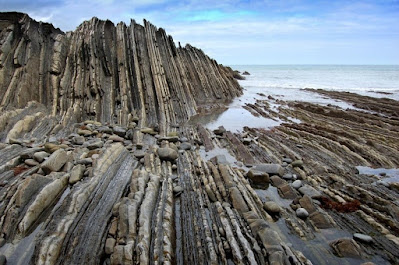 The cool, damp Atlantic coast of Iberia (northern Spain plus Portugal) produces zingy, crisp wines - often from Albariño (Spanish) or Alvarinho (Portuguese). Further inland, away from the cooling breezes, it becomes riper and fuller.
Portugal's Vinho Verde is an anachronistic but delicious wine; refreshing, spritzy and low in alcohol, it is a perfect summer sipper.
Slightly further north in Rias Baixas, Albariño is made in a weightier style more reminiscent of Marlborough Sauvignon Blanc, with higher alcohol, lifted aromatics and some tannic buzz from skin contact maceration.
Vale Dos Pombos Vinho Verde, Portugal (£6 or 2 for £11, The Co-op)
Vinho Verde is a light, fresh zippy style of wine from the cool Portuguese Atlantic coast; it is a great summer sipper, barbecue wine or a match for fresh shellfish.
A blend of Arinto de Bucelas, Loureiro and Trajadura from Quinta da Lixa based in Minho.
Spritzy, with crisp apples-and-pears, tropical citrus, sherbet and white stone fruit; orange blossom, briny sea-spray and minerality.
Good and Good Value.
Serve as a spitzy aperitif on a hot day or match with fresh shellfish.
Also recommended by David Williams in The Guardian.
Terra de Asorei, Pazo Torrado Albarino, Rias Baixas, Spain, 2019 (Daniel Lambert Wines)
Imported by Daniel Lambert.
Terra de Asorei is an association of eight top growers belonging to the Rias Baixas Designation of Origin who have banded together to produce premium 100% Albariño wines.
With their own 70 Ha of Albariño vineyards they went from a family company to a professional organization producing three wonderful wines:
The winery is located in the Salnés Valley, close to the city of Cambados, the capital of Albariño. The wine-producers provide the combination of experience and the most innovative technological abilities and their total capacity of production is up to one million bottles.
The vineyards, on average are 20 years old , which are located in the Salnés Valley, in the Rias Baixas region of Spain. One of the main tourist areas of Galicia, with a privileged climate of Atlantic influence, mild temperatures and an abundance of rainfall .
The Salnés Valley is located on the left bank of the estuary of Arousa.
floral with ripe yellow stone fruits, honeysuckle and a waxy texture; full, supple and saline-mineral with excellent underpinnings and a long finish.
Very Good.
Match with roast white meat, such as pork belly with apple sauce and horseradish.
Paco & Lola Albariño, Rias Baixas, Spain (£12, Virgin Wines)
From the O Rosal Valley in the south of Rías Baixas.
The climate is mild, due to the Miño River and Atlantic ocean, with mineral-rich soils.
Aromatic zesty citrus, acacia, cut grass and musky melonskin; fresh stone fruit, lychees and honeysuckle with zingy grapefruit and lime; intense, mineral and persistent.
Good.
Match with strongly flavoured seafood, such as prawns and calamari with garlic, ginger and herbs, cod in a herby broth or herby-garlic cream cheese on crusty bread. 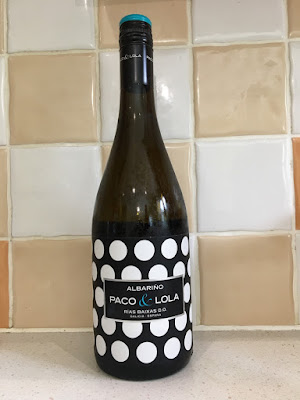